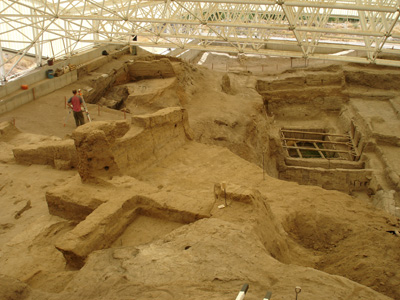 Sometimes assessing human impact on the environment can feel like a uniquely modern obsession, but it is not so. A great deal of research in Neolithic archaeology is devoted to how people interacted with and adapted to their environment. Understanding of how they managed animals and plants as food and fuel resources, or exploited the landscape for craft activities such as pottery production, is key to our perceptions of this period.
The ways in which archaeologists seek to answer these questions has become increasingly sophisticated, following the development of advanced scientific techniques and technology in the past few decades. One relatively new approach, known as ‘microarchaeology’, combines a suite of microscopic and geochemical methods to examine archaeological deposits at a high resolution. This enables clues about the past to be detected that were missed by traditional archaeological techniques – because they are invisible to the naked eye.

The Neolithic site of Çatalhöyük, located in the southern Anatolian region of Turkey, offers an ideal case study for addressing these questions, primarily due to the scale of occupation it witnessed, in terms of both ground area and time depth. The site covers more than 20ha, and was continuously occupied for at least 1,000 years from the early Neolithic through to the dawn of the Chalcolithic (or Copper Age), a period spanning approximately 7,400BC down to 6,000 BC. The density of settlement has resulted in the site being styled as one of the earliest urban centres in the world (see CWA 8). Equally importantly, the preservation conditions at the site are unprecedented, resulting in a wealth of artefacts and materials that can be investigated using cutting edge techniques.

Çatalhöyük was discovered in the early 1950s by James Mellaart, and originally excavated between 1961 and 1965. The magnificent paintings and artefacts he uncovered, such as the famous Mother Goddess statue – now on display at the Museum of Anatolian Civilizations in Ankara – ensured that the site swiftly acquired international fame. The quantity and quality of artwork and symbolism is rare for such an early site, and emphasizes the existence of a thriving community subject to complex social organisation. It remains a regional research focus, and there have been renewed excavations under the direction of Ian Hodder since the early 1990s. These have concentrated on examining the origins of agriculture and domestication, and the ways in which people interacted with a complex and changing environment.

The excavations have acquired an impressive reputation for pioneering new scientific methods in archaeology, and for bringing together large numbers of specialists to ensure that the various different categories of archaeological evidence are fully integrated. This approach ensures that the maximum information can be harvested from the abundant plant and animal remains, stone tools, pottery, and human remains.

Amongst the new techniques developed at the site is one called thin-section micromorphology – originally devised to study soil formation processes, the technique has been applied to archaeological sediments by Wendy Matthews of the University of Reading and her team. Their goal is to seek out telltale indicators of activities at the site, which are preserved at the microscopic level. Teasing out such traces, however, is not straightforward, and blocks of archaeological sediment must be collected in the field, before being analysed in situ in the laboratory. In order to achieve this, the blocks are set in resin, and then sliced and ground down to produce slides that are thin enough to observe under the microscope. The blocks can also be ‘micro-excavated’ – a painstaking process, but one which allows us to decipher microscopic signals from individual events.

Examining floor and wall surfaces under the microscope allows tiny fragments of plants, bone, craft debris, and other materials to be seen. Armed with such evidence, archaeologists are able to determine how space within buildings was used to a degree that would be impossible using more traditional methods. Even such everyday tasks as wall plastering can be appreciated in a whole new way: the house-proud Neolithic occupants took pains to ensure that living areas remained clean and fresh by applying hundreds of coats of plaster, with a new layer being slapped on at approximately monthly intervals. Storage areas, however, were carefully tucked out of sight and thus treated accordingly – they have a rougher appearance, due in part to only being replastered once a year.

Examination of floor surfaces has revealed that the inhabitants of Çatalhöyük kept their buildings remarkably clean. Even under the microscope, traces of ash and dust are scarce and confined to specific areas within the buildings, suggesting that sweeping floors was a routine element of their inhabitants’ chores.

Yet, outside the buildings it is a different story. Both within and between clusters of buildings are massive middens, which in places cover areas several metres wide. The stratigraphy of these middens is incredibly complex, and individual layers can be less than 1mm thick. Each of these fine layers relates to a single activity, such as sweeping out hearth material, burning animal dung as fuel, or discarding broken basketry and matting. It is impossible to excavate such ephemeral layers in the field; but by studying intact blocks of sediment under the microscope, it is possible to distinguish the different layers and thus the different activities to which they relate.

Middens are generally described in archaeological literature as rubbish heaps, but the Neolithic inhabitants of Çatalhöyük held a different view – recognising that they were a useful resource in their own right. The Çatalhöyük middens were routinely quarried to create level surfaces for new buildings, or to provide packing material between walls. The surfaces of the middens themselves were often seen as a convenient site to have a fire, leaving them both pockmarked by numerous small pits, and covered by deposits from bonfires. Middens are particularly important at a site like Çatalhöyük, because the inhabitants’ desire to live in clean homes means that they are the best source of information on the daily lives of the site’s occupants, containing the vast majority of plant and animal remains at the site.

Microscopic scrutiny of midden matter has revealed a wide range of deposits. Although the majority is composed of ash and decayed organic material,the analysis of ash can yield a great deal of information about human activity.

Deploying a combination of methods, including scanning electron microscopy, makes it possible to distinguish between different fuels, and therefore determine what plants and other materials were burnt to produce the ash. Microscopic fragments of materials that were incinerated can be seen, including silica phytoliths from reeds and grasses, tiny charcoal fragments from wood, and particles called spherulites, which are a telltale indicator that animal dung was being burnt as fuel. The variety of fuels and their association with either hearths in buildings, or bonfires in middens in turn gives a unique insight into the technological choices of Neolithic people.

Much of the organic material in middens can be identified as human and animal coprolites. Faeces are rarely the first thing people think of as important archaeological finds, but they provide a key source of information about diet and health. The sheer volume of such material at Çatalhöyük and its excellent preservation, provides an important compliment to other indicators of diet, such as animal and plant remains. It can be difficult to decide what species coprolites belong to simply by looking at their morphology and contents, as some animals have similar diets to humans. Reliance on seeds and bone fragments alone cannot provide clarity here. Humans, however, produce specific types of sterols and bile acids in the gut that distinguish us from other omnivores, and chemical analysis of the coprolites allows us to detect this signature.

Under the microscope, tiny inclusions in coprolites can be seen, such as microscopic plant and animal bone fragments, including cereal husks and hackberry seeds, which can give us clues to Neolithic diet, as well as the preserved remains of parasite eggs that give important clues about the health and lifestyle of the inhabitants.

Microscopic and chemical techniques can also be applied to other contexts. We have, for instance, often wondered whether plants and animal products were included as grave goods at Çatalhöyük, but decayed without leaving any visible trace. This possibility was first mooted during the original 1950s excavations, and now recently developed techniques are finally allowing us to test the hypothesis. Analysis of chemical residues from yellow deposits in burials has shown high concentrations of plant sterols associated with skeletons, indicating it is very likely plants were placed with the dead. What is more, microscopic traces of silica phytoliths were also discovered within the burials. These are the remains of plant cells and tissue that are preserved after the organic components have decayed, leaving remarkable impressions of baskets and matting. Such discoveries indicate the existence of complex funerary rituals.

The use of these microscopic techniques is still in its infancy, and we can expect further exciting new information to come from them. For the time being, they have provided us with a unique glimpse of a population that competed to display cleanly living areas, feasted on a wide variety of wild and cultivated foods, mourned for their dead, and recycled their organic waste. Many aspects of the lifestyle of these precocious urban inhabitants are still familiar in our own, more city-centric world. It is a reminder that sometimes the most important archaeological discoveries are neither beautiful, nor even visible.