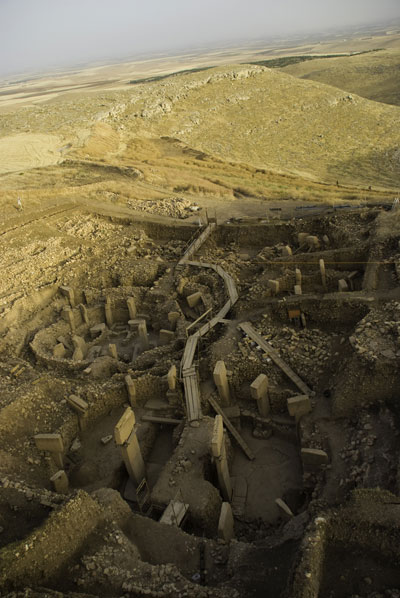 Towering over the vast Harran plain on the highest point of the Germus mountain range in south-eastern Turkey, Göbekli Tepe dominates the surrounding landscape. This mound is no natural phenomenon, but a man-made tell with sediments deposited over millennia.

It is clear, too, that this is no ordinary settlement. Massive monolithic blocks – carefully aligned to form circular enclosures, and exquisitely carved with detailed animal reliefs – lie deliberately concealed beneath the mound. The subtlety and sophistication of the finely fashioned shapes that emerge from the recovered stone pillars belie the early Neolithic society responsible for the sanctuary’s construction.

The site was first recorded in the 1960s, when it was written off as Byzantine – the carved stones lying around on the surface were thought to be gravestones. It was not until 1995 that Klaus Schmidt, scientific advisor to the German Archaeological Institute, surveying in the area, noticed the flint arrowheads and tools lying scattered on the surface. Then he looked at the ‘gravestones’ and compared them with the carved stones of the nearby Neolithic site of Nevalı Çori, which was disappearing under the waters of the Atatürk Dam. He knew immediately that he had found a very early Neolithic site indeed. Yet, even now, he did not expect quite what awaited him here at Göbekli Tepe.

Göbekli Tepe literally translates from the Turkish as ‘potbelly hill’. It is a vast site. Standing 15m (49ft) high and about 300m (328yds) in diameter, it covers 9ha of an area that lay in the western part of what was considered the ‘Fertile Crescent’ in ancient times.

Monumental megaliths
Schmidt and his team have reached the oldest and most impressive level. This is Layer III, which dates to the earliest phases of Pre-Pottery Neolithic (PPN A) in the 10th millennium BC – before pottery was invented.

Significantly, they found absolutely no sign of any domestic activity, such as rubbish pits or cooking hearths, and no domestic architecture. Instead, the archaeologists uncovered carefully formed concentric rings, ranging from 10m to 30m in diameter, made up of huge, distinctive T-shaped pillars.

These pillars, standing up to 4m (13ft) in height, are set at equal distances into walls that are lined with benches, and that define the inner and outer spaces of the enclosures. The huge megaliths point towards the middle where two, even larger, central pillars stand. These monoliths are more than 5m (16ft 6ins) high and weigh about 10 tons each.

The pillars are made from a very hard, crystalline limestone. Traces of quarrying are found all around the surrounding area, and may be one of the reasons the sanctuary was located here. To create monoliths of this size and with such fine carvings requires high-quality limestone, a resource available in abundance here on the Göbekli Tepe plateau.

Geomagnetic survey, including ground-penetrating radar, showed circular enclosures had been built all across the mound. More than ten large circles have already been located – though the archaeologists are confident this number will more than double.

Animal symbolism
The most impressive circle is Enclosure C, which consists of three – or possibly even four – concentric circles. Again in the centre are two large central T-shaped pillars: Pillar 35 and Pillar 37. Both had been smashed in prehistoric times. The destroyed pieces were found in a large pit that had been made especially for this destructive purpose. A virtual reconstruction of Pillar 35, made by laser-scanning the broken chunks, showed that it would have stood 5m (16ft 6ins) high. Two pedestals for the central pillars had been carved out of the carefully smoothed natural bedrock floor.

The T-shaped pillars were highly decorated with pictures of wild animals. It seems each enclosure may have had its own special animal attributed to it, similar to tribal totems known in the ethnographic record. In Enclosure C, these motifs are dominated by depictions of wild boars – indeed, most of the wild boar sculptures at Göbekli Tepe have been discovered in Enclosure C. It is interesting to note, too, that there is just a single representation of a snake in this entire enclosure – on one of the large horizontal stone slabs in the southern part of the enclosure – and none on any of the pillars.

The most impressive pillar in Enclosure C is number 27. Beside the flat relief of a boar, there is a spectacular high relief of a predator – a beast that cannot be identified but is clearly bigger than the boar below it – with both animal and pillar being carved from a single block of stone.

While Enclosure C may be the most impressive, Enclosure D is the largest. It is also in an excellent state of preservation. The only visible damage dates to its time of origin, and shows signs of successful repair during that same period. So far, ongoing excavation has uncovered two huge central pillars and 11 more in the surrounding walls – though others may still lie hidden.

While the most common depictions here are of foxes and snakes, there is altogether a much wider range of motifs. These include boar, aurochs, gazelle, a wild ass, and a large carnivore – probably a felid. There are also carvings of different birds, like cranes, storks, ibises, and ducks.

The narrative character of several of these depictions is particularly well illustrated by Pillar 43, whose whole surface on the western face is covered by a variety of creatures, all dominated by a great vulture. This huge bird lifts its left wing, while the right wing stretches out to the front, possibly pointing towards the sphere – or disc – at its wing-tip. To the right of the vulture are carvings of another bird – possibly an ibis – and a snake, two H-shaped symbols, and some young fowl.

Travel Tips
Archaeologists are usually happy to show visitors their sites. There are also companies, like Andante Travel (www.andantetravels.co.uk), Travel the Unknown (www.traveltheunknown.com), and Eastern Turkey Tours (www.easternturkeytour.org) who offer specialised tours, some with expert guides.