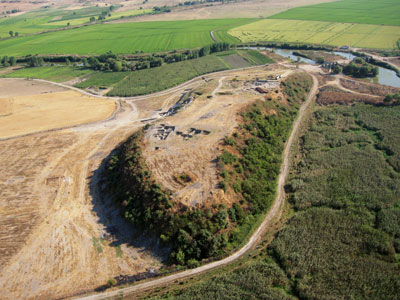 The multicultural society of a Persian satrapy capital

The unstoppable Persian king, Cyrus the Great, powered through Anatolia, conquering all in his path. In 547 BC, he defeated Croesus, the legendary Lydian king of ‘rich as Croesus’ fame. The new empire was divided into regional satrapies; the capital of one was Dascyleum, where recent excavations led by Kaan İren tell the story of that fiery onslaught and subsequent settlement.

Perhaps modern society could learn a thing or two from the inhabitants of the ancient Phrygian city of Dascyleum, where for centuries Phrygians, Lydians, and Persians lived peacefully alongside one another, sharing and respecting each other’s culture, art, and customs. But life here was not always so idyllic: recent excavations have revealed burnt levels dating to the third quarter of the 6th century BC, a time of turbulence and violence as the Persian army, sweeping through Anatolia (modern Turkey), arrived at the city’s gates. Cyrus the Great (reigned 559-530 BC), founder of the Achaemenid Empire, had the wealthy kingdoms of Media and Lydia in his sights.

Dascyleum is situated on a hill called Hisartepe, which lies on the shores of Manyas Lake near the village of Ergili, in Bandırma Province. Two and a half hours by ferry from Istanbul, it commands a key strategic position overlooking the region where Thrace, the Straits, the Marmara Sea, the Black Sea, and Middle Anatolia all connect in west-central Turkey.

The king of Lydia, Croesus, had already annexed Phrygia and fended off his nearest rival the king of Media, when Cyrus sought to expand his great empire by leading his army across Anatolia. First the Median kingdom fell, and then Lydia. In his wake, Cyrus set up an administrative system that divided the empire into provinces, or satrapies, each with its own governor, called a satrap. These provinces were granted autonomy, and the administration of the satrapies left to the individual satraps. The satrapies of Cilicia, Armenia, and Cappadocia were already established by the time Cyrus continued his inexorable march to the Lydian capital of Sardis.

While we know from historical records that the satrapy of Sparda was set up as soon as Sardis was captured, we have no similar records for Dascyleum in Phrygia. However, there are a few clues to its status under the Achaemenids: the Greek historian Xenophon of Athens, in his 5th-/4th-century work Hellenica, refers to the palace of the satrap Pharnabazus, with its associated hunting grounds. He writes of Pharnabazus expressing his deep sadness that the Greek warrior Agesilaos has destroyed the city: ‘now I see the palaces inherited from my father, the park full of game and trees, destroyed and burned’. This suggests that Dascyleum, with its palaces and parks filled with many species of animals, birds, and fish, was the capital of the Phrygian satrapy. The region is today the Manyas bird sanctuary, a natural park that has endured through the centuries.

The Greek historian Arrianus (or Arrian) gives us another clue to the settlement’s past: he tells us that when Alexander the Great came to take Anatolia for himself, the first Persian commander he confronted was none other than the last satrap of Dascyleum, Arsites.

According to tradition, the name of the city comes from a Lydian noble Dascylus. Dascylus, the father, had been murdered in Lydia as a result of palace intrigues. His pregnant wife fled to Hellespontine Phrygia and settled down in a town – later Dascyleum – where she gave birth to a son, who took his father’s name. After a while, the younger Dascylus became the king and eponyme of the city (Dascyleum means ‘the place of Dascylus’). The new king of Lydia, Candaules, invited him to Sardis and offered to restore his family’s honour. But Dascylus sent his son, Gyges, back to Lydia instead of himself. Gyges assassinated Candaules and seized the throne, which Herodotus describes as the return of Lydian political power to the Dascylus dynasty.

Ancient writers describe Dascyleum as the ‘Hellespontos of Phrygia’, which seems to imply that Phrygian expansion in Anatolia extended further north and west than previously thought. Inscriptions in the Phrygian language, the discovery of a coloured stone model of a Temple of Cybele – the Phrygian goddess of nature, earth, and fertility – and quantities of decorated and inscribed pottery attest to a Phrygian presence here. The team also recovered artefacts dating to later periods that bore Phrygian inscriptions, proving that their culture and language endured.

Revealing the site
The city’s precise location had long been debated – indeed, Medieval author Stephanus of Byzantium refers to five settlements called Dascyleum in Anatolia. Today, however, historians and archaeologists agree that the remains here at Hisartepe, near to modern Ergili, are those of the Persian satrapal capital.

Kurt Bittel, former director of the German Archaeological Institute (DAI), was the first to identify the site in 1952, and excavation began the following year, directed by the Turkish archaeologist Ekrem Akurgal. Almost immediately, Persio-Anatolian reliefs and bullae (seals) were uncovered that confirmed the city’s Persian connection. Work stopped in 1959 and did not resume until 1988. Then, in 2009, Kaan İren took over, uncovering more of the site’s multicultural character by finding evidence of different ethnicities living harmoniously together.

Excavation is currently focused to the west of a paved road, nicknamed the Cultic Road, and stretches back through several cultural horizons from the Byzantine period to the second half of the 6th century BC.

The earliest artefacts recovered from Dascyleum date to the Bronze Age but were discovered in later contexts. These include figure-of-eight-shaped objects, stone axes, and a Babylonian seal. No structural evidence survives for this earlier period. Indeed, there seems to be a great gap in the archaeological record between this earlier period and about the 8th century BC.