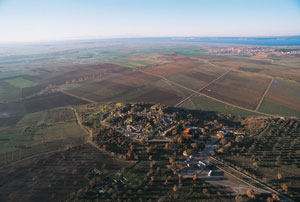 From one iconic archaeological site to another, we end this round-up at Troy, on the western coast of Turkey. The site was more or less continuously inhabited from about 3000-500 BC, with a small village surviving into the Middle Ages. It is the location of the legendary city of Ilion, also known as Troy in the Iliad, the epic poem attributed to Homer, one of the oldest works of literature in Europe. The Iliad tells the story of the Trojan War, a ten-year siege of Ilion by a coalition of Greek states. Other texts report that the siege was successful due to the trick with the Trojan Horse. Although well-known and highly-regarded in antiquity, the city decayed after major earthquakes in the 1st millennium AD and its location was forgotten.

It was re-discovered in the 19th century and first excavated on a large scale in the 1870s by Heinrich Schliemann and Wilhelm Dörpfeld, both Germans, following extensive surveys by Frank Calvert, an Englishman who held several consular appointments in Çanakkale. Excavations were resumed between 1932 and 1938 by the American Carl Blegen. In 1988, after a long lull in activity, the Americans and Germans came together again, in a joint expedition between the universities of Tübingen and Cincinnati, led by Manfred Korfmann.

Schliemann and Dörpfeld had already identified at least nine settlement layers, each on top of the other, which Schliemann called cities. The sixth settlement may have been the Homeric Troy, with its imposing city walls, still standing up to 8m high. Schliemann also famously recovered some 20 hoards of metal objects, many of them of gold. Most of these finds are now in Moscow. Blegen refined the stratigraphy to some 30 settlement layers, while Korfmann’s team made the major discovery of the Lower City of Troia with a moat partly surrounding it, suggesting that Troy covered at least 30 hectares in the Bronze Age.

Now, excavations are concentrating on trying to clarify the extent of the Lower City by following the course of the moat to investigate whether it completely surrounds the inhabited area. Also under analysis are the precious-metal Trojan finds that are currently distributed worldwide. We want to investigate whether they belong together; and, in the case of certain objects bought from the antiquities markets, whether they may have come from Troy. Thanks to the ongoing excavations, the site has become more accessible and a visitors’ path has been established with information panels at several stations. Restoration work is also being continuously undertaken – such as that of a 3rd millennium megaron house, that has been reconstructed using mudbricks. So now, Troy’s delights can be reaped by all.