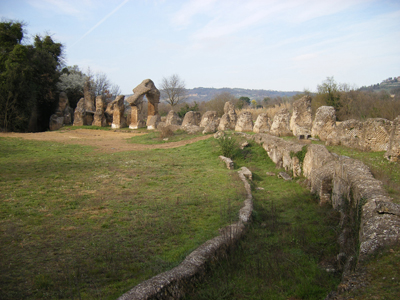 The story of the rise of Rome is best studied not in the city itself, but in the area surrounding it. It is here that we can see the impact of Rome’s expansion, and measure its speed and extent. For centuries scholars have wondered whether the rise of Rome spelled prosperity or disaster for those it conquered. And did it bring about a different form of society in the areas it absorbed?

The answers lie in the city’s hinterland, and in particular the region to the north. This is known as South Etruria, and as Rome outgrew its modest origins, it became the interface between the fledgling power and the well-established Etruscan confederation. It is in this ancient flashpoint that over the past half century the British School at Rome has tirelessly pursued survey and excavation projects.

In the 1950s the Italian government launched an extensive land reclamation scheme, which put many areas of pasture under the plough for the first time in centuries. Archaeologically, this was both a disaster and an opportunity, for the pottery this brought to the surface provided a silent witness to the distribution of ancient sites. The British School at Rome Director from 1946 to 1974 was John Ward-Perkins. He seized the gauntlet with enthusiasm, scouring ever increasing areas to the north of Rome which were eventually stitched together to form the South Etruria Survey.

The results were first summarised in a remarkable book The Changing Landscape of South Etruria by Tim Potter, who worked on the project. His sad death in 2000 at the age of 56 was a cruel blow to British and Italian archaeology (see CA 167). But his book was a revelation. Here for the first time was a vivid demonstration of the power of this sort of landscape archaeology, and it received an enthusiastic review in CA 68.

But it could only be a preliminary account. Pottery studies were in their infancy, and many of the interpretations relied on fine ware analysis, as coarse wares remained undated. By 1988 sufficient progress had been made for a resurvey to be attempted. This was called the Tiber Valley Project, the main aim of which was to re-analyse all John Ward-Perkins’ survey evidence, a huge task that involved the creation of a data-base, maps and the re-identification of all the ceramics collected by his team.

A preliminary account of the results of the project was published in 2004 in the Papers of the British School at Rome entitled Three South Etrurian Crises. As the authors observed, ‘crises’ may be too strong a word. Nevertheless these ‘three crises’ form the pinch points where questions need to be asked.