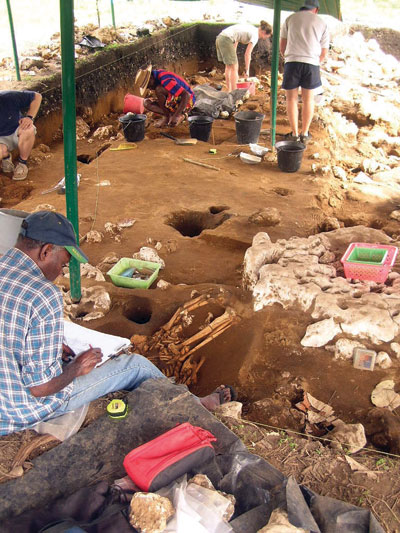 Running south-east from Indonesia there is a whole series of islands, all volcanic in origin and all volcanic today – the land here is rising rapidly. In the middle of this string of islands, about 1,000 miles due east from Australia, is a group known today as Vanuatu, though known through most of the 20th century as the New Hebrides; it was run as a Condominium by the British and the French until it gained independence in 1980. Vanuatu consists of some 80 inhabited islands, scattered over 800 miles from north to south. In the middle lies the island of Efate, the third largest of the group, and roughly twice the size of the Isle of Wight. And it is here that the remarkable excavations have taken place.

Human occupation of these Pacific islands came in two stages: the islands to the north, New Guinea and the Solomon Islands, together with Indonesia and indeed Australia, were occupied remarkably early at around 40,000 BC, at a time when sea levels were much lower than today due to the effect of the Ice Ages. The remainder of the islands of Melanesia and Western Polynesia were not occupied until much later, at around 1000 BC, when they were populated in something of a rush. What caused this sudden rush of colonisation? An answer frequently given is that it may have been due to the invention of the sail and perhaps of the outrigger canoe, which enabled much further long-distance sea voyages to be undertaken. This cannot be proven, but it seems likely that some such invention caused this remarkable outburst of colonisation at around the same time.

Linguistic footprint
The earliest – and still one of the most interesting – methods of tracing this colonisation is by using the evidence of the languages. All these areas speak a language of the Austronesian, or southern islands, group. The Austronesian languages are grouped into ten major sub-groups, nine of which are found only on Taiwan (Formosa), and which is therefore considered to be the origin of the colonisation.

On Taiwan, the Austronesians are a minority population, overwhelmed in numbers by the Chinese since mass immigration in the 17th century. Previously, they had been considered by the Chinese to be backward headhunters; now, however, due to the political differences between Taiwan and mainland China, they are held in greater respect, providing an ancestral basis for Taiwan being separate from China. But the tenth sub-group of Austronesian languages has been extremely successful. It has spread over the whole of the Pacific, both down to New Zealand and across to Easter Island, but also across the Indian Ocean where the peoples of Madagascar speak Austronesian languages. There are over 500 Austronesian languages in all, so that it can claim to be one of the world’s biggest language groups.

Discovering Lapita burials
Archaeologically, however, this occupation of the islands around 1000 BC is marked by the spread of the Lapita culture, derived from the more generalised Neolithic cultures found in Island South-east Asia. The Lapita culture is known best from its remarkable dentate-stamped pottery – which can perhaps be compared to Beaker pottery in Europe – producing remarkable patterns that are widely admired. But they also carried with them horticultural plants, domestic animals, and a distinctive suite of material culture, including stone axes, elaborate shell ornaments, and knives made from obsidian. Over 200 sites are now known, virtually all of them occupational sites, which meant that very few complete pots had been discovered.

However, at Teouma, an extensive early Lapita cemetery has now been discovered, revealing for the first time a considerable number of complete pots, as well as several exotic burial practices. Teouma lies on the shores of a bay, which is some ten miles south-east of the capital and chief town of Efate Island, Port Vila. The Bay, formerly known as Shark Bay, but now for some reason renamed Turtle Bay, was to be the site of a new prawn farm. A bulldozer driver quarrying soil for the banks of the prawn ponds began finding bones and pottery. These were reported to the Vanuatu Cultural Centre, which invited the Australian National University to send a team headed by Matthew Spriggs and Stuart Bedford, who made some remarkable discoveries. The site today lies some 800m from the shore, but the land is rising due to regular earthquakes, and originally it would have been on the shoreline. The burials were made in crevasses in the rocks by the seashore, in holes in the raised fossil reef and dug into the original beach. The bodies were deposited as complete corpses, loosely wrapped in mats. As they decayed, so various bones were collected, particularly skulls and long bones. These were sometimes buried elsewhere, sometimes placed with other burials. In one remarkable case, there was a skeleton with three skulls on its chest, and one of the skulls had a jawbone from a fourth skull. Eventually, the remains were covered with earth and thus preserved.