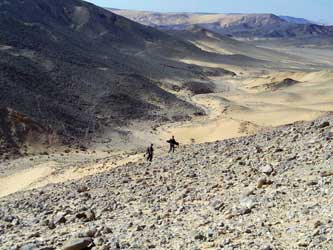 Current World Archaeology‘s dig – the Great Arab Revolt Project – is now in its third season. A team of specialists and volunteers has been working in Jordan to reveal the archaeology of TE Lawrence, co-directed by Current Archaeology‘s Neil Faulkner. Julian Evan-Hart and Roger Ward report back.

Jordan offers breathtaking desert scenery and one of the richest concentrations of first-rate archaeological sites in the world. The work of the Great Arab Revolt Project (or GARP) takes us to remote locations on traditional desert routeways used by nomads, pilgrims, and traders for thousands of years. Though we focus on events just 90 years ago, the Hijaz Railway and the Great Arab Revolt are part of a much older story inscribed across the landscape by material remains — by scatters of ancient pottery and medieval coins, and by prehistoric stone circles, Nabataean temples and tombs, and Mamluk forts and cisterns. Some of this rich heritage we encounter during fieldwork, but there are also two days off to give volunteers a chance to sample some of the sites, including, of course, the jewel of Jordanian archaeology, the rose-red city of Petra.

A metal-detectorist in Jordan
My usual metal-detecting haunts are the damp, muddy fields of Hertfordshire, writes Julian Evan-Hart. To have the opportunity to use my skills in the sand dunes of Jordan is a privilege I have still not got used to — even though 2008 was my third trip. The Great Arab Revolt Project is ground-breaking stuff, and what we have revealed is beyond all our initial hopes.
In 2008, we returned to many previously visited sites ‘to finish off’, as well as starting new ones where we could apply earlier lessons. I had been rather hesitant at first about combining Ground Penetrating Survey (or GPS) recording with metal-detecting. Of course, I knew the advantages, but I felt it would slow down operations if the detectorists themselves had to GPS every find-spot. It did, but the information was vital, so we worked out a new system, where a volunteer GPS-operator worked with the detectorists. It seems a small matter, but talking it through produced a fast, efficient system for both recovering finds and logging distributions. The results were astounding. 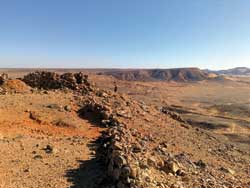 In probing Jordan’s First World War history, the metal-detectorist recovers not just ‘buttons and bullets’ but metallic finds from all ages, providing a rapid key-hole glimpse at 2,000 years of past human activity. As well as identifying 1916-1918 military use, we can also see when the area was used previously, and by whom.

From our surveys we now know what types of guns and munitions were used, what buttons were worn on tunics and even who manufactured them, what German and Austrian products were supplied to these remote outposts. We discovered that the cement used to build the Hijaz Railway stations was manufactured in Marseille, as we found tiny lead seals from the sacks. And we established that mules were kept for transport from the evidence of their rusty shoes.

But did we generate more questions than we answered? For me, as a detectorist, I am always intrigued by the unknowns. Who dropped that superb 12th century Italian silver coin that we found on the craggy hillside of Fassu’ah Ridge? What was the name of the Ottoman officer whose star-shaped epaulette ‘pip’ was revealed s the fine sand grains poured through my fingers? Who stuffed a bullet-holed and blood-stained Ottoman army jacket into the side of that tent-ring? Nine decades ago, when an Ottoman soldier played a game of cards, not for one second could he ever have imagined that tiny fragments of his cards, now desiccated and brittle, would be lovingly collected, bagged, labelled, and shipped to Britain for study.
So many questions hover — about the people who left these material traces in the sand. Just occasionally, though, we get a name. Just occasionally a personal seal matrix is discovered, bearing an Arabic name and even a date: giving us the actual identity of an Ottoman Army soldier serving at one of our sites. From these tiny bronze artefacts, a fresh avenue of research opens up. Are there records of his war service? Could his relatives be traced? Modern conflict archaeology in Southern Jordan means pioneering use of metal-detector survey in the desert sands to uncover the material remains of lost war. An extraordinary experience. 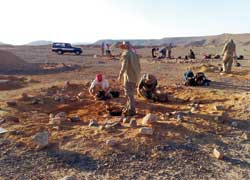 Blog from the Desert
From his laptop in the desert, GARP webmaster Roger Ward kept an on-line blog of the Great Arab Revolt Project 2008. The full daily blog with reports and images from each of the day’s activities of the 2008 season may be read at http://garp2008.blogspot.com. Here are the edited highlights.
…Day 2 — Ottoman Army emerges from desert sand…

Excavation of Batn Al-Ghoul Ottoman Army camp has already revealed on the first day spectacular finds. As anticipated, the stone tent-rings forming the camp are proving to be rich in the micro-debris of everyday military life.
Six teams of three volunteers each excavated a tent-ring and discoveries included food debris such as date stones, peach stones, and animal bone; fragments of rope, canvas and military uniform; and such special finds as Ottoman uniform buttons, a playing card, and a bank note.
As work proceeds, we hope to build up an intimate picture of the everyday life of Ottoman soldiers engaged on the Arab front of the First World War.

…Day 6 — A Ridge Too Far…
Work shifted today to Fassu’ah Ridge, the hilltop enclosure which overlooks Batn Al-Ghoul camp and offers commanding views down the Wadi Batn Al-Ghoul and the Wadi Rutm beyond. 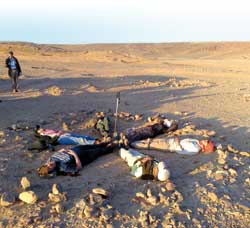 Though ruinous and much damaged by gold-digging holes, the site is an impressive combination of central strongpoint and large walled enclosure. Early Islamic pottery has been found nearby and the fortification itself almost certainly has a medieval origin. We suspect it served and protected the traditional routeway of trade and pilgrimage dating back thousands of years, and that camel caravans may have over-nighted inside the enclosure.
Finds from the site confirm Ottoman re-use during the Arab Revolt. These include Ottoman military buttons and fired Mauser rounds.

…Day 7 — Spilt perfume in the dust…
We suspect that an Ottoman officer stationed at Fassu’ah Ridge during the First World War had a penchant for German perfume — judging by our discovery of the metal lid and spray mechanism of an expensive perfume bottle dating to between 1906 and 1913.
Lawrence reports trainloads of luxury goods coming down the Hijaz Railway heading for the Ottoman forces and being eagerly looted by his Bedouin irregulars. In these remote desert garrison posts there was, it seems, at least a whiff of the decadent Istanbul high-life.
In other respects Fassu’ah Ridge was a bleak outpost, though one located with stunning views which reflected its commanding position overlooking the Wadi Batn Al-Ghoul and the Hijaz Railway. 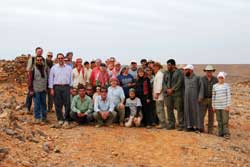 How many men slept in an Ottoman Army tent during the First World War? To find out, we did some experimental archaeology. Six plucky members of the team lay down within a tent ring, arranging themselves radially, feet central and heads out, in an attempt to establish what might have been practical given the size and shape of the tent. Six men, together with their arms, equipment and clothes would have been tight packed: our guess is that this would have been the number actually housed within the tents.
This has been a terrific season — and though we pack up our equipment in two days’ time, we look forward to next year for a fourth season of digging, sifting and discovering.