From prehistoric temple to Byzantine church 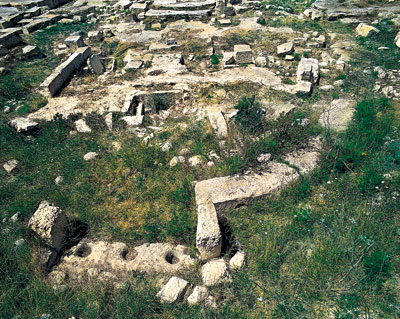 For nearly 5,000 years, the sanctuary site at Tas-Silġ lured worshippers to its idyllic island setting overlooking the blue waters of the Mediterranean, evolving and adapting as new religions emerged. Now, 20 years of archaeological research is bringing this long forgotten but once influential religious centre back into the limelight, as David Cardona reveals.

Marcus Tullius Cicero introduces us to a temple on the small Mediterranean island of Malta in his prosecution speech against Caius Verres, governor of Sicily between 73-71 BC, describing the significance of this remote sanctuary site:

Not far from the town, on a promontory, there stands the ancient Temple of Juno, so venerated that it has remained sacred and unviolated, not only during the Punic Wars which ravaged those places with their naval forces, but also in spite of these multitudinous pirates. … When one of King Massinissa’s fleets found itself in that place, the king’s admiral removed from the temple ivory tusks of incredible size. Taking them to Africa, he gave them to Massinissa. At first the king liked this gift, but when he discovered where those tusks had come from, he immediately sent his trusted men in a quinquereme to put them back. … [In the sanctuary] there was also a large quantity of ivory, and a large number of ornaments amongst which was a carefully and supremely crafted ancient ivory [statue] of Victory.

Cicero may well be guilty of exaggeration – he was, after all, a lawyer in the course of prosecuting a former governor for his wrongdoings. However, the long seasons of excavations carried out on the site at Tas-Silġ by the Missione Archeologica Italiana and the University of Malta have shown that the Temple of Juno was, indeed, not only a venerable temple throughout the Phoenician, Punic, and Roman periods, but also one of the sites with the longest use on these islands.

Writers since the mid-17th century have speculated on the exact location of the temple. The remains of ancient walls are depicted in one of Jean-Pierre Houël’s 18th-century lithographs, but the site was not excavated until the 1930s. Even then investigation was limited to a number of trial trenches. It was another 30 years before the full extent of the site started to be understood, when an Italian Mission, led by Antonio Cagiano de Azevedo and Antonia Ciasca, was given permission to excavate. The Italian Mission excavated between 1963 and 1970, and again from the late 1990s up until 2012; meanwhile, the University of Malta carried out archaeological investigation in the southern section. Together, these seasons have uncovered a succession of structures quite unlike anything seen elsewhere on the island.

The story of this site starts during Malta’s Temple Period, when a Tarxien Phase (c.3100-2500 BC) megalithic temple was built on the hill now known as Tas-Silġ, midway between St Thomas Bay and Marsaxlokk harbour. There are many remains of free-standing, prehistoric megalithic temples on Malta, and the one at Tas-Silġ did not stand alone in the area. It was possibly within sight of a temple at Borġ in-Nadur in Birżebbuġa and another at Xrobb l-Għaġin, and very close to prehistoric remains recorded at Ħal Ġinwi.

Until only a few years ago, it was believed that the temple at Tas-Silġ was relatively modest in size, consisting of at least four apses that were enclosed within the usual elliptical outer wall and a concave façade. However, excavations recently published by the Italian Mission reveal that this smaller temple actually formed part of a much larger and more complex conglomeration of structures that include the remains of at least two more.

Size does matter, but the increasing importance of this prehistoric temple cluster is also being gauged by significant new information recovered during excavations. Some features are unique to this site, such as, for example, the stairs constructed along the outer wall of the first temple. Another peculiarity is the rectilinear layout: until now, prehistoric structures found on Malta were all predominantly round in shape. Pieces of clay and daub with impressions of wooden beams may also start to throw some light on the ongoing debate about how these temples were roofed.

But the best known artefact from this period of occupation remains that of the fat figure, commonly known as ‘the fat lady’ – though whether such figures are male or female is often not clear. One of these was found carved in high relief during the first phases of excavation, though it had been severely damaged by ploughing. It remains, however, the second largest to be found on Malta, and is a relic of the period that started the occupation of a site that was to last for another four millennia.

The Temple Period comes to an abrupt end at around 2500 BC and, like every other prehistoric structure on the Maltese islands, the temple at Tas-Silġ was abandoned.

It remained unused until the Bronze Age, when a culture bearing the same name as the nearby site of Borġ in-Nadur (1500-700 BC) took over the old buildings. The use of the temple during this phase shifted from a religious purpose to what seems to have been a domestic one. Recent excavations have recovered numerous broken shells, pieces of ceramic ‘anchors’, and weights in several parts of the building, all of which seem to show major exploitation of marine resources.

It was not until the early Phoenician period, in about the last quarter of the 8th century BC, that the site once again became the focus of religious ceremonies. It remained a place of worship with no significant interruption from this point on until at least the Late Roman period. Once again, Tas-Silġ demonstrates its uniqueness, being the only known example of a prehistoric structure on Malta that was used by the Phoenicians for their own religious needs.

Perhaps this is not so strange when one considers the prime location that the temple occupied. Nearby Marsaxlokk was one of the best sheltered harbours to the south of Malta until the development of those around Valletta in the 16th century AD; and the location of the site at the top of the hill overlooking the harbour would have created a landmark, one that sailors coming in and out of the harbour could easily see and recognise.

Whether it was location or lack of financial resources, the incorporation of part of the prehistoric temple within the new Phoenician temple of Ashtart is usually seen as an effort by the new settlers to bond their religious beliefs and practices with both the island’s past and its indigenous inhabitants. Thus, the home of the new goddess incorporated part of the ancient structure that was to remain the focal point of the temple right up to the Christian use of the site centuries later.