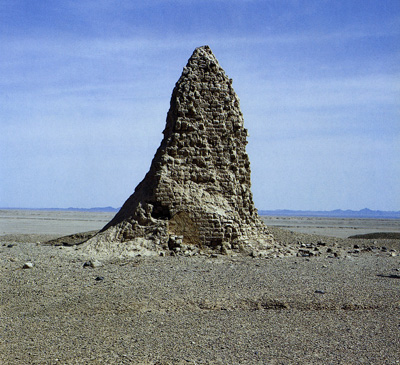 In the early 20th century, western explorers ventured far into northwest China, seeking the relics of ancient Central Asia, or ‘Chinese Turkestan’, as it was then known. Setting out from the major oasis town of Dunhuang, once a prosperous crossroads on the Silk Road, these pioneers entered a hostile environment. Ringed by mountains, scattered oases offered the only safe passage around the impassive expanse of the Taklamakan desert – one of the driest places on Earth.

Amongst these explorers was Sir Aurel Stein (1862-1943), a Hungarian who acquired British citizenship, and then British funding, to undertake his work. Most famous for his controversial acquisition of manuscripts from the Caves of the Thousand Buddhas, near Dunhuang, (see CWA 43), Stein made many stunning discoveries in the region. During four expeditions between 1900 and 1930, he recorded ruined walls, towers, garrisons, small fortified towns, and granaries, extending west from Dunhuang to the oases bordering the Taklamakan Desert. These shattered vestiges of imperialism formed a key component of the border works collectively called the Great Wall of China.

It is well known that there was not, in any sense of the word, one Great Wall. Neither are the stretches of walling continuous, nor were they the product of a single concept. Instead, the defences evolved over a 2,000 year period, between around 481 BC and AD 1583, being periodically extended, refurbished or abandoned as circumstances required. The position and structural style of the frontier installations Stein recorded between Dunhuang and the desert allowed them to be confidently identified as the work of the Han empire – one of the earlier phases of border construction. Equally importantly, the discovery of thousands of documents describing day-to-day activity gives the mute frontier stones a voice, providing unique testimony to the development and function of the border.

China in their hand

The Han dynasty succeeded the short-lived Qin dynasty (221-206 BC), ruled by Qin Shi Huangdi. Celebrated as ‘the first emperor’ of China, it was he who moulded a collection of feudal states into an empire. The Han dynasty itself can be divided into two parts: from 202 BC to AD 9, the so-called ‘Western Han’ ruled the Chinese Empire. Its capital lay at Chang’an (modern Xi’an – most famous for its proximity to the terracotta warriors). In AD 8 the powerful Wang family usurped the throne, but by AD 25 the Han were back, and the ‘Eastern Han’ would wield power until around AD 200.

During the 2nd and 1st centuries BC, the western Han conquered both Gansu province, and a large tract of territory in what is now China’s Xinjiang region. Most of Gansu consists of plateau or mountains at an altitude of over 1000m. The area forms a natural corridor, linking Chang’an with Xinjiang, and the Taklamakan Desert. Lying at its eastern end, the oasis town of Dunhuang served as the gateway to the Gansu corridor, and Han China. To the west, Xinjiang has, like Tibet, geographical and cultural conditions that have little in common with neighbouring Chinese provinces. Both Gansu and Xinjiang regions were to be the sites of violent clashes between the sedentary Chinese empire and their nomadic enemies to the north.

During the Western Han period, the fledgling empire faced two challenges: ensuring internal stability, and securing its borders from external foes. The chief military threat came from the hu or ‘barbarians’ who dwelt to the north and north-west. During the Han dynasty, it was the Xiongnu nomadic tribes that endangered the Chinese frontiers. Originally from Outer-Mongolia, the Xiongnu enter the historical record at the end of the 3rd century BC. By 210 BC, they had embarked upon a fast and effective campaign of territorial expansion, bringing them into conflict with the Han Empire.

The Xiongnu forces were well-equipped and used fast cavalry to devastating effect, dispersing and then overwhelming the Han army. Outmanouvered militarily, for about 60 years the Chinese were forced to adopt a humiliating policy of gift exchange to relieve the pressure. In practise, this amounted to little more than outright bribery. Amongst the concessions were that the Xiongnu could trade at Han markets along the borders of the Empire; the Han would furnish them with tributes of clothes, grain, and so on; and Han princesses would be married off to Xiongnu nobility. Yet, far from stemming the Xiongnu hordes, the wealth this arrangement brought was used to fuel further expansion. In 170 BC, the Xiongnu invaded Xinjiang, and overran the Gansu. Now the two main roads to the Western Han capital lay open before them.

This dire situation endured until the emperor Wudi (140-87 BC) ascended the throne. His no-nonsense reputation stems from his determination to resist these nomadic incursions. He dispatched his trusted emissary, Zhang Qian, to enter into a league with Central Asian cultures that had also suffered at the hands of the Xiongnu. From 133 BC, the Han abandoned the policy of appeasement and launched the first military campaigns against the nomads, using massed groups of mounted soldiers. The Han’s primary objective was to recover the lost territories in Gansu, an area known as the Hexi – literally the ‘far-west’.