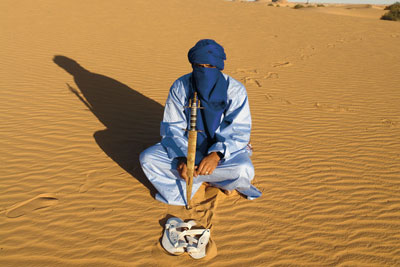 During the 14th century AD, Europeans began to hear tales of vast camel caravans coming out of the Sahara laden with West African gold, slaves, and ivory. Central to these stories was Timbuktu, which came to be thought of as an African ‘Eldorado’, a legendary city made of gold. Timbuktu was, at this time, the main market centre of West Africa. It was an integral link in the flourishing Islamic world trade system, stretching to other far-flung places such as China, India and Indonesia. Stories of this rich trading world of West Africa, and the enormous Saharan camel caravans, still fascinate and intrigue. But how did this trade come to be? What was the story of West African trade before the 14th century? What were the origins of this trans-Saharan trade system? These questions led me to dig the mysterious ruins of Tadmakka in Mali.

Scholars have long believed that trade across the Sahara only began in earnest when West Africa became united with the expanding Islamic world trade system, and tapped into the new commercial opportunities this presented. While there is broad agreement on this, reconstructing the early story of this Islamic trade has proved far from easy. When exactly did West Africa become united with the Islamic world trade system? Where were the most important centres of this early trade? I believed archaeology could provide new answers. My explorations lay not at Timbuktu but at the largely forgotten, yet once legendary, trading centre of Tadmakka, deep in the Malian desert.

Tadmakka, known today as Essouk, or ‘the market’, lies some 500km north-east of Timbuktu in the desert heartland of the Malian Tuareg, and 45km from the nearest town, Kidal. Its stunning ruins stretch over a kilometre within the Essouk valley. Now isolated, in early Islamic times, Tadmakka’s position on the West African side of the harshest stretch of the Sahara would have been extremely important as it offered an ideal location to allow caravans to prepare for, or recover from, the hardest stretch of the Saharan journey.

While Timbuktu was almost unheard of before the 13th century, Tadmakka was first recorded in Arabic texts in the 10th century, vaguely linked to trade with the first historically documented West African states: Ghana and Gao. However, the first clear detailed account of Tadmakka was written in AD 1068, by the Spanish-Arab historian and geographer al-Bakri.