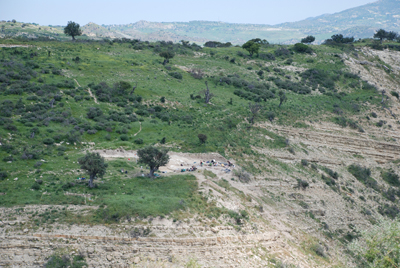 When Cyprus adopted the Euro early in 2008, the government had to decide what symbol should adorn its new currency. Although the Euro may look the same, every country issues its own coins, incorporating its own national emblem. This created a particularly sensitive dilemma for Cyprus. What symbol should they adopt?

The distinctive Copper Age (or Chalcolithic) figurines dating to around 3000 BC proved ideal subjects. Although these bear a passing resemblance to the well-known Cycladic figurines of the Greek Aegean islands, the Cypriot examples are much smaller, much older and the product of a very different tradition. Similarities to a Christian cross are equally misleading, as most of the figurines are stylised representations of crouching females with outstretched arms. This posture echoes the birthing position frequently adopted in early communities. When a mother is about to give birth she is gripped by the arms, which are pulled back, and told to ‘push’. This is the moment that is represented by the figurines. The association of the icons with this critical, and dangerous, act is highlighted by the depiction of miniature figurines around the necks of some of the statuettes frozen at the instant of birth. All the stone figurines are made of picrolite, a soft volcanic rock that is found on the Troodos mountains, the range at the heart of west-central Cyprus.

A settlement where such figurines were manufactured is currently being excavated by Eddie Peltenburg and his Edinburgh team at Souskiou, in the south-west corner of Cyprus, ten miles east of Paphos. Souskiou takes its name from an old Turkish village that was abandoned in 1974; the nearest Greek village is Kouklia, which is in turn adjacent to Palaepaphos, or Old Paphos, the site of a renowned temple to Aphrodite that perpetually disappoints non-archaeological visitors as it has been systematically robbed down to its foundations. The site at Souskiou lies within a dramatic landscape, where two rivers have carved deep valleys into the limestone strata. One of them, the River Dhiarizzos, was still flowing in recent times, although ever increasing water abstraction has finally sucked it dry. The other river, the Vathyrkakas, has long been no more than a rocky channel. The Dhiarizzos riverbed was also a valuable source of picrolite washed down from the mountain, providing a further incentive to establish a settlement nearby.

The site at Souskiou and its figurines belong to the Copper Age. This is a major period in Cyprus, spanning over a thousand years from 3800 BC to 2500 BC, and separating the Neolithic from the Bronze Age. It was once thought to be detached from the Neolithic by a 500 year gap, but radiocarbon dates have now proven that this is illusory. There are nonetheless major differences between the two periods, chief of which is a demographic expansion into the west of the island where there had previously been few, if any, Neolithic settlements.