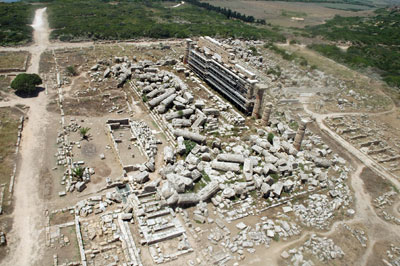 The Temple of Hera at Selinunte is testament to the grandeur of this great Classical settlement. But it is just one of many on this sanctuary site. Now, Clemente Marconi and his team have uncovered one of the finest examples of Greek cult architecture and, next to it, one of the earliest to be discovered so far West – dedicated, they believe, to Hera’s sister Demeter.

Selinunte is as well known today for its impressive monumental temples as it was in its heyday. These houses of the gods symbolised the settlement’s economic and military prowess, and were strategically sited within the cityscape, grouped into an articulated series on the Acropolis and on the hills both to the west and to the east. Such imposing temples would have had a dramatic impact on approaching travellers, broadcasting loud and clear that the gods themselves were guarding the city from beyond its walls. Today, the 20th-century reconstruction of the Temple of Hera (Temple E) can be seen standing proudly on the eastern hill, hinting at Selinunte’s former glory.

The settlement was established in the 7th century BC on the south-western coast of Sicily and rapidly prospered. Our work concentrated on the main urban sanctuary on the Acropolis, one of the main public areas of the city, where two of the largest temples are found: Temple C, dedicated to Apollo; and Temple D, dedicated to Athena. These peripteral temples, along with altars and stoas, date to the second half of the 6th century BC. This was clearly a significant space that was used primarily for public events and festivals up until the Carthaginian destruction of the city in 409 BC. From the third quarter of the 4th century, most of this area was then occupied by shops and residential housing.

Our investigations focused in particular on Temple B, one of the most important examples of sacred architecture in Hellenistic Sicily. The temple stands alongside Temple C, occupying a prominent location in the southern sector of the sanctuary. It is a Greek cult building, but it was erected at a time when Selinunte was under Carthaginian control and inhabited by a mixed Greek and Punic population. As such, it raises interesting questions about cultural identity, and how this is reflected in architecture and ritual practice.

Temple B is enclosed by Temple C along its northern border and by Temple R along its west wall, with a peribolos wall along its southern edge and one of the main entrances to the sanctuary lying on its eastern side. It was erected during a time of major reconstruction of this part of the site.

Excavation has revealed that the floor was raised and levelled with fill, creating a base for the construction of Temple B and its altar to the east. On the north side, a long structure opened towards the rest of the urban sanctuary, an area that was transformed into a commercial and residential quarter during this period.

It seems evident that Temple B and its altar represented an important place for purely Greek cultic practices within a city under the military and political control of Carthage, and with a mixed Greek and Punic population.

As such, Temple B is representative of the larger process of hybridisation that took place in this part of the Mediterranean during the Late Classical and Hellenistic periods – and included the introduction of the cult of Demeter and Persephone to Carthage. We believe that, given the complex situation at Selinunte and in the western Mediterranean as a whole during this period, Temple B may have been dedicated to the goddess Demeter.

Unfortunately, when Temple B was excavated over the course of the 19th century, the archaeologists dug well beyond the original ground level. As a result, little remains of the stratigraphy associated with life in the city during and following the construction of our building, and of votive deposits or the remains of animal sacrifice associated with the temple and its altar. In view of this, our discoveries in the area of Temple R are all the more remarkable.

Earliest Greek temple
Temple R, located to the west of Temple B, dates to the early 6th century BC and represents one of the earliest cult buildings at the site. It is a non-peripteral temple, articulated into a deep cella with an adyton. Our work on Temple R started in 2011, but it was only during this past season that we have concentrated on the interior of the temple, excavating a trench associated with the south-east corner of the cella. This research has shown that in the Hellenistic period the floor inside Temple R was raised by more than a metre (3ft) above its original position.

This layer of Hellenistic fill inside the cella contained a number of important finds, such as the fragment of an Attic white ground lekythos, whose style is close to the vases of Douris and which depicts Eros offering a wreath to a youth. More importantly, this fill sealed the Classical and Archaic levels inside Temple R, preserving them untouched, despite about 200 years of archaeological investigations at Selinunte.

Our first significant find within this level was the discovery of the floor dating to the Classical period. It was burned, and showed clear evidence of violent destruction: more than 20 arrowheads were recovered along with a bronze sheet that had been smashed on the ground. It seems likely that what we are witnessing here is the devastation wrought by the Carthaginian sack of Selinunte in 409.