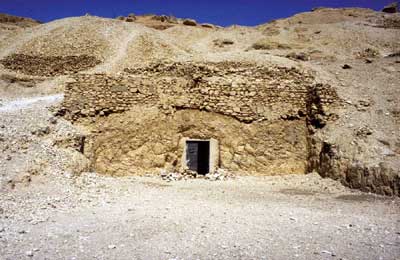 Egypt is most famed for its élite tombs. But how did such structures really work? Egyptologist Nigel Strudwick, formerly at Cambridge, now at the British Museum, has been addressing this question by looking at some of the tombs of high officials who served the kings of Egypt. Here, he draws special attention to the tomb of Senneferi.

It seems that élite tombs worked on three levels, both physically and symbolically. The deeper down underground we go, the further we get into the world of the dead and into the afterlife that was so essential to the Ancient Egyptians.

At the highest level is a superstructure. Sometimes we find small pyramids above tombs. These indicate that this upper level would have been devoted to the sun god. In Senneferi’s tomb there is no pyramid, but there is a niche within the building-up of the top of the façade of the tomb. This small niche, no more than 40cm in height, would probably have accommodated a small kneeling statue of Senneferi with hands raised to adore the sun, perhaps also supporting a small stela (pillar) bearing a solar hymn.

Below the superstructure is the second level, that of the tomb chapel. This would have been the only easily accessible part of the tomb to visitors or mourners. The chapel was fronted by a courtyard, behind which was a front room, followed by a short passage, and then at the rear was a room that served as the main shrine. The latter was the place where offerings would have been left and prayers made on behalf of the person buried there.

Senneferi’s tomb chapel was originally painted with scenes throughout, but the paintings have been badly damaged. Nonetheless several very interesting scenes remain, including a crucial scene in Senneferi’s life. Here we find out how he was sent to Lebanon to lead an expedition to get pine trees that were converted into flag poles. Senneferi expresses his surprise at climbing the mountain to reach the forests and meeting a layer of cloud. It was only when he had been through the cloud that he came to the forest from which the flagpoles were obtained. This was presumably the biggest adventure of his career and he duly records it in his tomb. Another very damaged scene in the tomb shows a fortress of Near Eastern type, with a number of Asiatics in the turrets; the foreigners can be identified from their white robes with red and blue stripes and by their beards and hairstyles. In the inner part of the tomb was a scene of a woman making a bed. It may possibly have had a sexual significance, referring to the creation of new life – one of the fundamental purposes of the tomb. In addition, adjacent to this bed stands what is probably the first appearance of the dwarf leonine god Bes, whose responsibilities included watching over human fertility and childbirth. It is not too far-fetched to see this figure as an extension of the rebirth aspect of this scene. The ceilings remain well-preserved and bear brightly painted patterns, probably imitating mats which would have formed the roof coverings or decoration of Egyptian homes.

The third and final level is that of the burial itself, which would have been underground, in the realm of Osiris, the god of the dead. In the case of Senneferi, this was roughly 20m below the chapel, entered by a shaft in the courtyard.

On reaching the original floor of the courtyard (on level two), we discovered three shafts, one of which proved to be the entrance to the burial of Senneferi himself. The shaft went down for 15m, that is 50ft. Beyond this was a corridor, 8m long. At the end of it, we found a chamber, alas, empty. From here, a small shaft dropped down to an antechamber and then to the burial chamber itself. Remains of the original burial were still there, but thoroughly smashed up.

The surviving evidence made it possible to learn much about the burial of a high-ranking Egyptian of the first half of the 18th dynasty. For example, even though only fragments remained, it was possible to determine the type of coffins used by Senneferi. At the beginning of the New Kingdom, coffins were predominantly white in colour, but between 1500 and 1400 BC, there was a radical change to black; Senneferi’s coffins were of this newer black type. Traces of at least two coffins were found and also fragments of gold leaf showing that at least one of the coffins had been gilded.

There were also hundreds of fragments of papyrus, showing that a Book of the Dead had been placed in the burial of Senneferi. This itself was a fashion that was subject to change. In the early 18th dynasty wealthy people were buried in a linen shroud inscribed with the Book of the Dead, however by the middle of the dynasty, the preferred form of the book was on papyrus. Senneferi had both types in his burial, suggesting that he was buried at a time when these traditions were in transition. It is at present the only known example of both together, and thus forms a ‘missing link’ in the development of the Book of the Dead.

There were also fragments of the canopic jars, the jars in which the embalmed vital organs were placed. We recovered four of these and two human-head shaped lids; instead of bearing the name of the owner they were inscribed with the hieroglyphs of the names of the four sons of Horus whose job it was to protect the organs and the deceased. Among the more unusual objects found were two apparently shapeless pieces of stone which on examination were clearly made of ivory. They bore hieroglyphs indicating they were adzes named ‘wer hekau’ and ‘imy-ut’. Were these in fact models of the ritual adzes used in the Opening of the Mouth ceremony performed on mummies shortly before they were placed in the tomb? This ritual enabled the mummy magically to breathe and see again. Other items found in the tomb which might also fall into the same category are a model of a censer, wooden models of a finger and an ox leg, as well as a pottery ostrakon (inscribed pottery shard) showing some parts of this ritual.

There are over 100 different episodes in the Opening of the Mouth ceremonial ritual, including censing scenes and the presentation of meat and a magical finger to the mummy – and so perhaps we had found part of a model kit buried with Senneferi. This appears to be the first time that such items have been found in an 18th dynasty tomb, although some objects that can be associated with the Opening of the Mouth were discovered in the 26th dynasty tomb of Tjaenhebu at Saqqara (c.600 BC).

Last but not least, more than 300kg of pottery were discovered, which has been reconstructed into over 120 vessels, from large storage jars to small wine flasks and dishes. We can certainly imagine that Senneferi went to the next world with enough food and drink to sustain him. There were also the remains of five persons (two male, three female), including one mummy coated with a 1cm thick layer of plaster before bandaging. Two of the males and two of the females were aged between 50-60 years, and I speculate that these bodies are those of Senneferi and his wife, and his parents; the younger female was perhaps an unmarried daughter, although next to nothing is known about his offspring.

In with the new

It is likely that his burial was robbed some time between the burial ceremonies and the end of the New Kingdom in 1079 BC. However, in the succeeding Third Intermediate Period Senneferi’s tomb, like most others in Luxor, was reused. Thus, in dynasties 21-26 (1079-525 BC) no fewer than six shafts were cut into the floor of his tomb chapel. More than 30,000 fragments of small finds were recovered from this area, roughly 50% of which were parts of coffins and mummy cases, which provide essential information for dating the reuse of the tomb. A further 20% were shabtis (funerary figurines) and fragments thereof.

The first reuse of the tomb dates to the 21st dynasty, around 1050 BC, and then further burials were made in the early-middle 22nd dynasty (about 900-800 BC). We have the mummy cases of two generations of one family at this time; and three or four generations of the family are mentioned. Perhaps the most interesting reuse comes at the end of the 8th century BC when at least two burials were made of two important officials, both of whom have statues recovered from the Karnak statue cache in the early 20th century and which are now in the Cairo Museum. One was Wedjahor, who was buried around 705 BC, and whose mummy was discovered in one of the shafts in the inner part of the tomb. He was the fourth priest of Amun. An adjacent pit also contained the burial of Horempe, a son of Wedjahor. There are some tantalising hints of connections with the Kushite kings of the 25th dynasty (715-664 BC): Wedjahor was buried in linen bearing the names of Shabaka, the Kushite king who reunified Egypt in 715 BC; a woman called Nyny, perhaps his wife, was the daughter of a priest of Kawa in the Sudan; and one unusual type of shabti, bearing a basket on its head, is best paralleled in the burials of queens of Shabaka and his successor Shabataka/Shebitku at el-Kurru, also in the Sudan.

Some burials may have been inserted into the tomb in the Graeco-Roman Period, but almost all identifiable traces are gone. After this there are no further burials made in the tomb though it may have been used by the Copts who left remains of Roman-type bracelets and masses of Roman pottery.

Work in the tomb of Senneferi finished in 2002, and the writing-up is now on its way. The tomb provided a great number of unexpected insights into aspects of burial customs in the New Kingdom and Third Intermediate Period and shows how careful work and recording can pay great dividends.