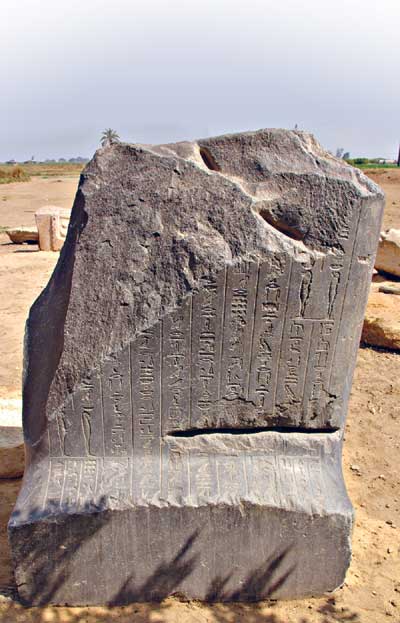 The EES Delta Survey, just described, has located a number of sites worthy of further investigation. Among them is the royal city of Sais. Here, site director Penny Wilson reveals the ancient city’s secrets.

Egyptologists have long known of the ancient and venerable Delta city of Sais. Texts tell that, since the start of the Pharaonic Era, around 3000 BC, it was the cult centre of the creator- and war-goddess – Neith. Much later, it enjoyed a brief period of fame as Egypt’s pharaonic capital and main ceremonial centre of the kings of the 26th Dynasty (664-525 BC), during the eponymous Saite Period. Some 150 years later, the Greek historian, Herodotus, enthusiastically described Sais as a great city, replete with grand temples, colossal statues and splendid royal tombs (Sais is, in fact, the Greek name for the Egyptian city of Sau). Even in the mid-19th century, modern western explorers recorded a massive mud brick Enclosure wall and ‘Citadel’ at Sais. Alas, by the late 19th century most of these structures had been removed – by European treasure hunters, local builders and landowners – leaving virtually nothing of this once great city.

Then, in 1993, the Delta Survey (outlined in the previous feature) visited Sais and, despite its battered appearance, identified its potential. Together with a team from the EES, Durham University and Egypt’s Supreme Council of Antiquities, I soon began investigating and excavating the Sais.

Would we find evidence of the kings that once walked the site? What exactly would remain of the royal capital’s great architecture? And might we even discover evidence of the very ancient cult of the belligerent Neith? Such were the questions that whetted my appetite as we set off for our first field season in 1997.

Seeking the kings of Sais

On our arrival at Sais in 1997, one of our first aims was to find the pharaohs and palaces of 26th Dynasty Sais (664-525 BC). That was the era when the local Saite rulers, having reunited and stabilised Egypt after invasion by the Nubians and the Assyrians, made their home-city of Sais into Egypt’s capital. To elevate its status into a fully-functioning capital, they built a palace, garrisons for soldiers, and invested heavily in rebuilding the ancient cult temples of the Saite gods.

Searching for these remains, I decided to begin work in the so-called Northern Enclosure. There, we tracked the traces of massive mud brick walls. Once 20m high, they were now reduced to dirt tracks, but surrounded a vast enclosure, some 700m by 680m in size. We identified this area as the likely site of the Citadel or Royal Palace of the 26th Dynasty kings. However, little remained of the city’s once-royal occupation – bar fragments of shattered stone monuments, and pottery fragments lying on the surface of cotton and wheat fields.

So, next we turned our attentions to the ominously named, but potentially rewarding, ‘Great Pit’ lying to the south of the Northern Enclosure. This Pit is an area approximately 400m by 400m that had likely been dug to around 3m below the ground level, around the 6th to 10th centuries AD. Ancient debris in the Pit revealed that huge stone buildings had once stood in this area.

Moreover, a number of limestone blocks still lie on the ground surface in the south-eastern corner of the Great Pit, including the remains of a massive ‘pylon’, some 40m in length. It seems that the Great Pit may, in fact, have been the location of one of Sais’ major temples. If so, then we also suspect that Sais’ royal tombs would once have been in this area.

In addition to searching for Sais’ kings and palaces, we recorded much else about the site during its hey-day. Thus, we identified the location of the Saite period (capital) city, replete with industrial area, which abutted the temple compound on the western and southern sides.

As part of this research, we excavated a Saite period rubbish dump covering a well. Pottery from this dump included Greek trading amphorae and cups, plus Syro-Palestinian resin or wine jars. These fragments attest to the extensive trading contacts of the royal city with Eastern Mediterranean countries known from the literary sources.

By excavating the foundations of a large administrative building on the eastern side of the Great Pit, we also discovered that this area of the town had been settled continuously throughout the succeeding Ptolemaic Period (332 to 30 BC) until today. The modern village, known as Sa el-Hagar, currently marks this site and stands upon a small hill marking the ancient settlements area. Further to the south of the modern village are sub-surface remains—mostly comprising pottery, burnt layers and bone—of a settlement dating from the Saite Period to the end of the Roman Period (around AD 400).

As a consequence of our work, we now know that the Saite capital once covered an area of around 3km by 1km, but shrank back to the south by the Roman period, and to a more modestly sized village at the heart of the modern village by the 19th century. At a number of the local villages, including that of Sa el-Hagar, one finds reused stone blocks of 26th Dynasty carved architecture within the modern buildings. These are the last remaining traces of the erstwhile capital that was once comparable, in importance and grandeur, to the famed cities of Memphis or Thebes.

But what of Sais before it became a royal capital of the 26th Dynasty? Ironically, the loss of the Saite buildings in the Northern Enclosure allowed us to investigate the earlier settlement. As we began to shift the surface material, we quickly discovered material from 20th Dynasty (c.1100 BC), some 400 years earlier. At that time, Sais was a relatively wealthy and successful provincial farming town. Its houses contained ovens, storerooms, reception rooms and courtyards. Its occupants drank wine from the Near East and worshipped the local cobra goddess Wadjyet.

For this ‘excavation’, we used hand-held augers to drill hundreds of holes, almost like a pin-hole surgeon, to collect information from up to 10m below the ground surface. We have thus been able to build up a picture of the continuous settlement under the Northern Enclosure from the underlying pottery and burnt material.

But would we discover evidence that Sais was once the cultic centre of the war goddess? Though direct evidence of her cult remains elusive, we have discovered clear evidence that people lived here from the Predynastic period, i.e. before the appearance of the Pharaohs, roughly around 3,500 BC. In addition, we have found evidence of an Old Kingdom cemetery (c.2500-2100 BC) in the area according to evidence from stone bowl fragments and distinctive orange polished ‘Medum’ bowls. Plus occupation during the Middle Kingdom to the Second Intermediate period (c.1700-1500 BC) in the form of mud-seals from administrative documents. Such small pieces of information add much human history to the bare bones of the textual information.

However, moving to the Great Pit area we discovered an even greater surprise: Sais turned out to have been a longer lived site than we ever expected. In the Great Pit area, we found settlement remains that go right back to the Neolithic period c.4200-3900 BC. No other site of this date has yet been excavated on the Nile floodplain. The Great Pit also contained later level evidence of the Buto-Maadi period cultural sequence, which dates from c.3,500 BC, and is the last phase before the rise of the Pharaohs. Clearly, then, people had thrived in this spot over several millennia, situated as it is in the centre of the verdant Delta and making use of its abundant natural fishing and vegetation resources.

Our work, begun as a consequence of the Delta Survey Project, has been extremely fruitful over the past 10 years. It has shown that even apparently destroyed sites can yield enough information to bring to life the Egyptians of the Delta. In future years we look forward to discovering yet more about this late, great, royal capital; and yet more about the dynamics of the Delta, from the first fishermen to the modern day.