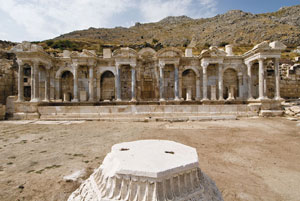 The sensational city of Sagalassos, was also added to the tentative list of sites submitted to UNESCO for World Heritage Site status in 2009. I have been digging Sagalassos since 1990 and below I offer a tour through time.

Sagalassos lies about 100km north of Perge, some 1,450-1,750m above sea level. It was occupied by at least the 5th century BC, and by the 4th century BC it controlled the whole Valley of Ağlasun. Its territory was further expanded after the city’s conquest by Alexander the Great in 333 BC. At this time, it was already probably partially Hellenised and a polis, controlling a territory that eventually covered some 1,200 km². Yet Sagalassos was destined to grow greater still. After its incorporation into the Roman Empire by Augustus (25 BC), it tripled in size within a century – gaining two major squares, elaborate honorific monuments and an early Imperial colonnaded street.

This was the place to live! The local elite grew rich by investing in cash crops, notably grain and olives; by producing an eastern variety of sigillata pottery; and, thanks to the Via Sebaste, which crossed the city and led directly to the Mediterranean, it had direct access to the rest of the Roman Empire. All this encouraged the local elite to embrace the Roman cause, which, in turn, led to Roman citizenship, and even knighthoods for some of its people.

The city consistently stands out from others in the area – known at this time as Pisidia. In contrast to other Pisidian cities, its 1st century AD architecture quickly adopted and adapted novelties from Rome, mirroring the popularirty of the opulent Corinthian order in its major monuments. The second century saw another building boom, suggesting the city’s importance increased from Hadrian onwards.

It was Hadrian who granted Sagalassos the title of ‘first city of Pisidia’ and selected it as the centre for the Imperial cult in the region, thus bringing thousands of Pisidians to the festivals and games (Klareia) connected with this worship.

However, the city no longer looked to Rome for inspiration, but to the provincial capital on which it depended on in the late 1st to early 2nd century AD: Ephesus. There it found new building types and architectural ornaments with special, often propagandistic, meanings. Eventually, it possessed at least four nymphaea of the tabernacle type full of statuary, as well as huge baths – with colossal statues of the Emperors from Hadrian up to Marcus Aurelius – and a theatre serving visitors to the Klareia.

From the early 5th century onwards, several Christian basilicas were constructed. A palatial mansion with an estimated 100 rooms testifies to the ongoing wealth of the local elite, if not that of the bishop. In some ways, it must have seemed as though nothing could stop Sagalassos – not even nature’s wrath. After an earthquake around AD 500, the city was rebuilt in suitably monumental style. However, its fortunes did soon change, and it seems that its people were ravaged by a recurrent plague from AD 541/542 onwards. This seems to have decimated the population and ruined many landholders. Consequently, after an even greater seismic event around AD 590, only pockets within the ruins remained inhabited during the 7th century.

The local sigillata production continued until the early 7th century AD. But from the 8th until the 13th centuries, Sagalassos consisted of (sometimes) fortified hamlets (kastra) and was abandoned during the latter century, when the Seljuk destroyed a mid-Byzantine fortress dated to the 12th-13th centuries. Thus our work has revealed a compelling picture of the rise and fall of this glorious site.