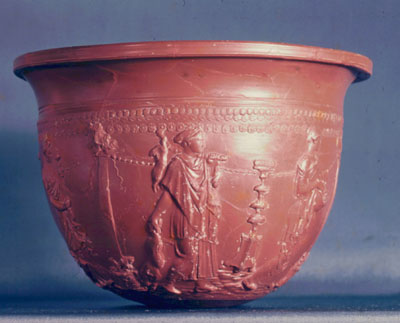 How terra sigillata made its mark on the Roman Mediterranean

As a schoolboy, Philip Kenrick was hooked by the fine red Samian ware he found amongst the coarse indigenous pottery at a site on the Watling Street in England. Otherwise known as terra sigillata, its more handsome precursor comes from Italy, and was traded throughout the Roman world. After enjoying great popularity, it suddenly fell from grace. Why?

Terra sigillata is a modern term for certain types of fine Roman tableware with a glossy red slip. In the archaeological record, wheel-thrown fine wares with a glossy black slip are found in Mediterranean contexts from at least the 6th century BC onwards. Attic black gloss ware, from Athens, and subsequently Campana A, from the Bay of Naples, were particularly widely traded.

For reasons which no ancient writer has thought to tell us, a taste for a red finish spread progressively during the 1st century BC, perhaps originating in Syria with the production known as Eastern Sigillata A. There was no cultural break from the black-slipped ware, and several forms are found in both techniques.

Another widespread tradition, already established in the 3rd century BC in the Mediterranean world, was that of producing relief-decorated bowls from moulds, the so-called ‘Megarian Bowls’. Some of these bore makers’ marks on the underside of the base.

In the last years of the 1st century BC, the time of the emperor Augustus, there was a tremendous artistic renaissance in Italy, something the potters in the Etruscan town of Arretium (now Arezzo) embraced with particular skill and vigour.

They developed a fine red tableware of high technical and artistic quality, producing relief-decorated bowls – typically in the form of chalices on a pedestal-foot – alongside a range of what we call plain ware. The profiles are not at all ‘ceramic’ in character, but seem deliberately to imitate the sharp angles typical of metalware.

Later, Gaulish producers of sigillata would take their inspiration from these wares, the earliest of them undoubtedly learning their craft in the Arretine workshops.

Making their mark
Makers’ name-stamps become a standard characteristic. Unlike those on the later Gaulish sigillata, they tend to be highly individual in design and convey complex information. They often mention more than one person, but the extent of abbreviation means it is often difficult for us to be sure of the relationships between them.

The simplest stamps bear a single name, frequently an obvious slave-name such as Celer (‘Swifty’), Hilarus (‘Happy’) or Primus, Secundus, Tertius. Sometimes you may find two or three of the tria nomina of a Roman citizen, perhaps coupled with a slave-name in a manner that implies one is working for the other.

Occasionally we see specific evidence of freedmen, and, very rarely, a succession of stamps that appears to show – by changes in the wording – a slave being freed and continuing to work for the same master. There are also stamps which appear to announce their credentials as ‘Arretine’.

The detailed interpretation of the stamps has been much debated. However, we do know that the stamps can reveal workshops which functioned over two or more generations. By tying names to sources, we can build up some idea of distribution patterns, both for production centres and for individual workshops.

This pottery was exported all across the Mediterranean world. In the west, it reached the Atlantic coast of Morocco; in the north-west, it came to Celtic Britain (at that time outside the Empire); in the east, it travelled as far as India; and in the south, to the Fazzan, some 645km (400 miles) into the Sahara desert. But how, and why?

Italian sigillata was not made only at Arezzo. We now know of a number of sources within Italy, in varying levels of detail. At La Muette in Lyon, France, a workshop that was productive in the Augustan period is closely tied, both stylistically and through potters’ names, to Italian production. Indeed, its wares are so similar that, prior to the discovery of the workshop in 1966, they were believed to be Italian in origin.

We also know that there were production centres in the Po Valley, though none have yet been uncovered. Arezzo certainly saw the biggest concentration of workshops and yet, not unlike the 18th-century potteries of Josiah Wedgwood at Stoke-on-Trent in England, it does not seem to have been ideally placed to exploit long-distance trade. It is some way from the sea, and upstream along the River Arno – not always an easy river to navigate.

The point seems to be made by the output of the workshops associated with the name of Cn Ateius. His earliest production took place at Arezzo, but in about 5 BC the workshop moved to Pisa on the coast. We know that there is a direct connection between the two, since some of his stamp dies were used at both locations. Thereafter, presumably through slaves who became freedmen and expanded the business, the name enjoyed a huge success in the western Mediterranean, accounting ultimately for 12 per cent of all the stamps in the latest catalogue. Incidentally, the name also appears on some of the earliest products at La Graufesenque, so it is possible that the leading south Gaulish production centre owes its origins to the same enterprise. Indeed, Ateius stamps from Pisa and Lyon even show up in Britain.

This was commerce on a considerable scale, but how did it function? Certainly, the Roman army knew the product and took it along when campaigning in Gaul and the Rhineland. But it was also widely disseminated in civil markets. Was this driven by market forces and consumer demand, or by other considerations?

Trading places
I believe we can begin to get a glimpse into this if we look at the distribution achieved by different potters working simultaneously at Arezzo. Publius Cornelius was a potter for whom we have direct evidence of manufacture in Arezzo itself and at Cincelli, on the Arno just 8km (5 miles) away. The pattern of distribution of his products is based on 536 stamps found other than at the production site. The products of Cornelius reach military sites in the Rhineland, but outside Italy the emphasis is on the western Mediterranean, and particularly Spain.

The enterprise which signed in the name of Lucius Gellius was larger – we have 945 examples of his stamped wares – and was in operation over a similar or slightly longer period. Finds of his products at Arezzo itself are rather scarce, but clay analyses of vessels bearing his mark have shown that he must have been working fairly close by and therefore subject to similar geographical constraints to Cornelius. His products are distributed in a similar pattern in Italy and the Rhineland, while in place of Spain, his major export markets appear to be in northern Italy and the Danube provinces.

It does seem to be clear in Italy, at least in some instances, that the potteries are tied up with landed estates. People with names like P Cornelius are not potters but senators and landowners, and the ‘subservient names’ (to use a neutral expression without prejudging their social status) may represent managers or craftsmen. So, it could be that Cornelius had sales in Spain because the family may have had estates there – after all, an earlier P Cornelius Scipio had had a distinguished military career there fighting against Hannibal. And perhaps, therefore, he also had interests in shipping which favoured markets in that direction. Unfortunately, no shipwreck with a significant cargo of Italian sigillata has yet come to light.

But why did Gellius send his goods predominantly to the north-east? Was there some similar factor at play, or did the location of his workshop give him better access to the Adriatic? Now that we can at least see these patterns of distribution, such questions raise themselves and beg for answers.