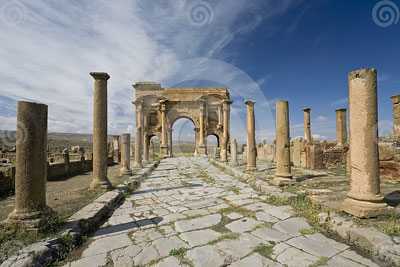 In 312 BC, Appius Claudius set out to build a road from Rome to the south of Italy. So began the extensive road network that, argues Ray Laurence, paved the way for commercial domination of the Roman world.

The Romans believed that they held an empire without end in space and time. Their geographical vision stretched to modern Scotland in the north, to Ethiopia in the south, and had the Atlantic Ocean providing the western horizon. Looking east, however, matters were more complicated: there was knowledge of other of kingdoms beyond the Parthian Empire on Rome’s borders. Yet finds of Roman coins in both India and China show Roman contact even with these distant peoples. Indeed, Chinese sources report the first Roman embassy to their Empire in AD 166, bringing rhino horn, elephant tusk, and tortoise shells, and led by a Roman called An’tun (Antoninus). These records also describe a key element of the Roman Empire: its mobility.

The only domestic animals the Romans had are listed by these Chinese sources: horses, mules, camels, donkeys, and mulberry silkworms. The latter is a focus of Chinese culture, but the others are significant: they are all transport animals. In addition, the sources tell us the Romans used small carriages with white canopies – but they needed to travel in groups due to the threat of wild animals such as lions and tigers (rather, interestingly, than brigands and bandits). The very brief description that we have from Chinese sources presents us with an Empire in which movement was its fundamental feature.

Mobility is a key aspect of globalisation, and it is the degree of mobility attained by Rome that allows the possibility of considering the Roman Empire as the earliest form of globalisation in human history. The ability to mobilise resources underpins the historical significance of the Roman Empire. This can be seen from evidence found in the ice-cores recovered in Greenland that have begun to reveal the long-term history of heavy metal pollution. Prior to the Industrial Revolution, there are relatively few peaks in pollution records – the one that is most prominent in every graph that has been produced is that of Rome in the 1st to 2nd centuries AD.

Never before had more metal been produced in human history, and only with the Industrial Revolution were these levels of metal production to be matched. The figures speak for themselves: 82,500 tonnes of iron per annum; 80,000 tonnes of lead per annum; 15,000 tonnes of copper per annum; and 200 tonnes of silver per annum. Underpinning an ability to produce so much metal are both the willingness to do so and the transport infrastructure to support the mining, smelting, and movement of resources. This would seem to peak in the 1st to 2nd centuries AD, and was followed by a reduction in production capacity back to levels associated with the 5th century BC.

The idea that the 1st and 2nd centuries AD saw a very different Roman Empire emerge can be found in relation to other archaeological sources. The Tiber Valley, to the north of Rome, has been subjected to more than half a century of field-walking and has provided new evidence for settlement in Rome’s hinterland. The typical pattern of settlement over the course of the Republic features 200 to 600 identified rural sites, with many being abandoned. This contrasts with the 1st century AD, which sees an expansion from about 600 to more than 1,400 sites. More importantly, going into the 2nd century AD, very few of these sites were abandoned. This points to a new stability to the settlement pattern that had not been known previously. It is notable in this period that many of the roads were paved for the first time, and that local paved roads can be found right across the region.

The stability was not to last though: in the 3rd century, the number of sites falls back to below 400 in total. Thus, for a short-lived period, something very different was occurring in this region of the Roman Empire.

The Greenland ice-core data and the Tiber Valley surveys demonstrate the outcome of what can be described as a long-term process leading to globalisation. It was not a rapid change – unlike that experienced within our own lifetimes, which has resulted in primary school classes in London having knowledge of some 20 languages. The Roman version of globalisation was extremely slow, but was led by ideas of geographical thinking that were quite revolutionary. Its origins lie with a decision by Appius Claudius Caecus to build both an aqueduct and a road in 312 BC.

The road was to lead south, some 100 miles (160km), to Capua through the recently settled Pomptine marshes (a new agricultural region). It was a massive undertaking that our source makes clear almost bankrupted the state – it is significant that it is in this period that Rome begins minting coins of her own, presumably to pay those working on the road that was to become known as the Via Appia. Even in Late Antiquity it was still known as the ‘queen of roads’.

The road as built originally would not have appeared like the paved Roman roads of school textbooks; instead it would have been a demarcated space that was public and for transportation. The first paving was only laid in 295 BC, from the Capuan Gate in Rome’s Servian Walls to the Temple of Mars. This was followed in 292 BC by the paving of a section of the road from the Temple of Mars to Bovillae, in the Alban Hills. The building of the Via Appia should not be seen in isolation: in 307 BC, roads were built through Rome’s public lands (ager publicus). In addition, colonies were founded on the Via Appia itself at Terracina and Minturnae.

This combination of road, colonies, and agricultural change can be found with the building of other roads, such as the Via Flaminia in 220 BC that went from Rome to Rimini and was to become known as the ‘straight road’ (via recta). An inscription from the 2nd century BC found in southern Italy, known as the Elogium of Polla, refers to a man who built the road, the bridges, and the milestones along its course. It also gives the distances to Capua, to Rhegium, and to other places at a considerable distance. The important feature here is that distance was measured: the roads had milestones and thus created a relationship between geography and the time it might take to travel from place A to place B. As a result, Cicero in the 1st century BC could send letters to friends, such as Atticus, in anticipation of his friend’s arrival. This causes Roman mobility to be timed and to relate space/distance to time – in a way that would be impossible with just a road and no measurement of distance. We can see this most clearly with letter-writing, but it would also be true of other forms of movement of goods: timber, building materials, and so on. It would have been possible to predict the supply of a material being transported by land.