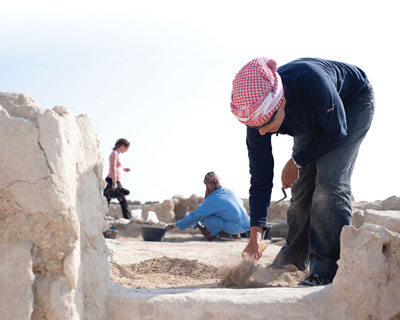 The Arabian Gulf boasts many more natural resources than just oil and gas. The seas that lapped its coasts were once one of the world’s main locations for oyster pearls and, owing to an insatiable international appetite for pearls, from the mid 18th until the beginning of the 20th century AD, thousands of people in the Arabian Gulf were involved in the pearling industry. This led to the foundation of new towns and drove a thriving import and export economy.

The ruins of the abandoned city of Al Zubarah in Qatar offer a snapshot, as if frozen in time, of the most intense period in this Gulf pearling industry. While a number of written sources describe the fishing of, and trade in pearls, new excavations at Al Zubarah are providing new insights into the bygone lives of pearl fishers, boat captains, traders and sheikhs during the times of the pearl trade.

Perched along a shallow bay, on the northwest coast of Qatar, lies a field of shallow earthworks. It is hard to imagine that, just 200 years ago, the bustling city of Zubarah once stood at this spot. Then it was over 100 hectares in size, with at least 3,000 inhabitants, and defended by towers and walls. It contained markets, mosques, town houses of merchants and traders, and grand defended compounds that were occupied by the city’s rulers.

First recorded as a small fishing village in AD1638, by 1766 the al-Utubi tribe from Kuwait had settled in Zubarah to pursue pearl fishing. This marked the beginning of an unparalleled rise of Zubarah to a regional centre. Other settlements in the vicinity were gradually abandoned, while this city boomed. The driving force behind this development was the seasonal harvesting of the pearl banks in the Arabian Gulf. To maintain the extensive fishing and trading operation, the pearling fleets required large, stable land bases to resupply food and water, and where they could sell their goods. Zubarah fulfilled this role, and its emergence, layout, development and demise were shaped by the fortunes of the pearling industry. However, just as quickly as Zubarah was built, so its fortunes began to fade. By the late 19th century the city was a mere shadow of itself, and by the beginning of the 20th century only a few fishermen used the ruins of the town to maintain boats and nets. When archaeologist Geoffrey Bibby visited Zubarah in the mid 1950s, he found that the town was completely abandoned.

Unlike many other cities in the Arabian Gulf littoral, which have since been built upon and developed into modern Arab cities, Zubarah was simply left to decay and was buried by sand brought in by the ocean wind – leaving us lucky archaeologists the well-preserved ruins of an entire city that developed on the back of the pearling industry. This gives us an unparalleled insight into the social, economic and political circumstances of the early modern period in the Gulf region; so, in 2009, the Qatar Museums Authority asked the University of Copenhagen to launch a large-scale, multi-disciplinary programme of archaeological research at Zubarah and sites in the hinterland.