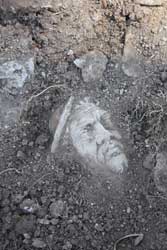 An amphitheatre, with a footprint to match the Pantheon in Rome, has been discovered at the 2nd century man-made harbour of Portus, Rome’s ‘gateway to the Mediterranean’.

Lying within a magnificent, imperial-style palace, the amphitheatre was for private use and may well have been used for gladiatorial combat, wild beast baiting or even mock sea battles to entertain select audiences 2nd century audiences — with guests that perhaps included the emperors Hadrian and Trajan, themselves. Built using luxury materials and apparently sparing no expense, this was an extravagant but private building in a surprising location: ‘It is unusual to find this type of building so close to a harbour,’ explained Professor Simon Keay, Portus Project Director. 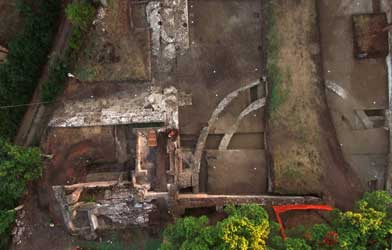 The structure was first discovered in the 1860s but only identified as an amphitheatre during recent major excavations undertaken by archaeologists from the University of Southampton working alongside the British School at Rome.

Among other finds on the site is a white marble head of a statue unearthed in one of the once-luxurious rooms close to the amphitheatre and believed to date to the 2nd or early 3rd century, 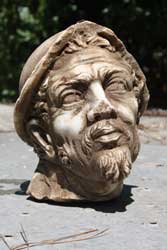 It depicts an elderly bearded male wearing a flat skull-cap, suggesting it could be a statue of Ulysses; however it is equally possible it is a representation of one of the Greek sailors who accompanied him on his travels. ‘For the moment his identity remains a mystery,’ concludes Professor Keay.

Portus was a ‘transport hub’, a vital trading point for the Roman capital, bringing in food, slaves, animals, marble and luxury goods from across the Mediterranean and beyond. In its heyday, sitting on the banks of a hexagonal shaped man-made lake, it would have been an impressive site – one to rival the famous port at Ostia — and work is continuing to uncover more of this major archaeological wonder.

‘This is one of the most important archaeological sites in the world,’ says Professor Keay. ‘Certainly it should be rated alongside such wonders as Stonehenge and Angkor Wat in Cambodia. So much of this Imperial port has been preserved and there is much more to learn about its role in supplying Rome and in the broader economic development of the Roman Mediterranean.