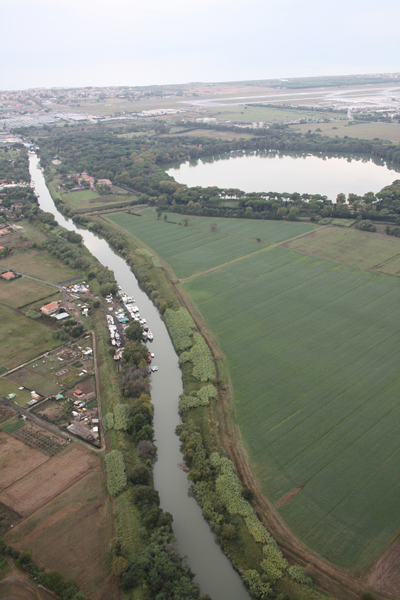 Rome had a problem. The Tiber River is too shallow for maritime craft. So Roman vessels plying the Mediterranean routes had to unload their cargoes at sea, transferring them to smaller skiffs capable of negotiating the river channel. Worse still, unfavourable winds could close the river mouth for days at a time. The Emperors invested considerable energy and ingenuity on ensuring that the maritime gates of Rome remained open. Central to their endeavours was the construction of a remarkable artificial harbour complex at Portus, 3km north of the Tiber mouth.

The British School at Rome has inherited the Imperial authorities’ passion for harbour infrastructure. Long running research programmes at the harbour city of Ostia and in the luxurious villas along the Castelporziano shore to the south of the Tiber (www.rhul.ac.uk/classics/laurentineshore) have recently been supplemented by a new flagship project at Portus (www.portusproject.org). From elite seaside retreats and Imperial amphitheatres to high rise apartment blocks, all three of these projects are bringing everyday life in Rome’s coastal hinterland into sharper focus.

Once the Republic became an Empire, and an individual took on the mantle of responsibility for the Roman state, the unreliable maritime supply system represented a threat to his position. Caesar acknowledged this when he investigated constructing a sea port near Ostia. However, the difficulties associated with this ambitious project seemed too great, and the idea was shelved. Yet as Rome grew, the matter became more pressing, and eventually the Emperor Claudius (AD 41-54) revived the project.

The site he settled on lay to the north of the Tiber, in a sandy lagoon along an exposed stretch of coast. His Portus Ostiensis was an engineering marvel that involved reshaping the coastline, sinking snaking harbour moles and even scuttling a ship laden with concrete to provide the foundations for a lighthouse. It is little wonder that the project outlasted Claudius, and it was left to Nero to inaugurate the port in AD 64.

This new harbour provided an anchorage on a massive scale. The 200ha basin projected out into the sea and had ample draft for maritime ships. At least two canals connected the complex to the Tiber, the sea, and a small associated settlement to the south on the so-called Isola Sacra. Yet for all its engineering ingenuity, the new harbour was still not an entirely safe berth, and Tacitus records that 200 vessels were wrecked during a storm in AD 62. The next major phase of development at Portus came under Trajan (AD 98-117), the centre-piece of which was a second and smaller 32ha basin of hexagonal plan which greatly increased docking facilities. This new harbour, built directly inland from the Claudian port and connected to it by a major canal, remains a visual treat for alert tourists flying into Rome. A network of further canals connected the hexagonal harbour to the Tiber and the Isola Sacra. Large warehouses, administrative buildings and a temple bordered the new basin. The whole port complex covers some 3.5km² and, aside from exceptional complexes like Alexandria, dwarfs most other ports in the Mediterranean. It is the sheer scale, archaeological potential and significance to our understanding of the development of Imperial Rome that makes Portus one of the most important archaeological sites in the Mediterranean.