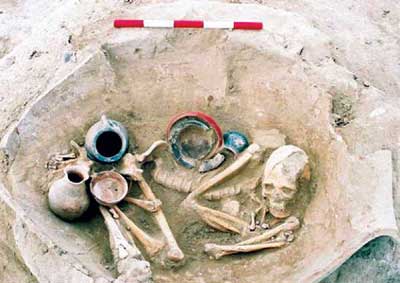 One of the longest pipelines in the world has just been completed, running from Baku on the Caspian, to Tbilisi in Georgia, to Ceyhan on the Mediterranean in Turkey, – hence known as the BTC pipeline. The pipeline was masterminded by BP: how did it affect the archaeology?

Here we see a view of the pipeline marching across the countryside in Turkey. Although in Azerbaijan and Georgia a number of archaeological sites were disturbed by the pipeline, in Turkey there was a major effort to minimise the danger to sites. The whole length of the pipeline – 1076 kms – was walked, the pipeline was re-routed in places, and in the event only 17 sites of potential archaeological interest were subject to salvage excavation.
Many other statues have been discovered, many of them set up by soldiers in the nearby fortress. Here we see a fine statue of Venus, sadly without her head.

The biggest disturbance was to a Greco-Roman necropolis of rock-cut tombs at Yüceören, in Adana province, seen here fully excavated.

Many of the tombs consisted of underground chambers where burials were made in niches in the wall. In the event the site was deemed so important that it was decided to preserve it and the pipeline was rerouted at a cost of over $1million.