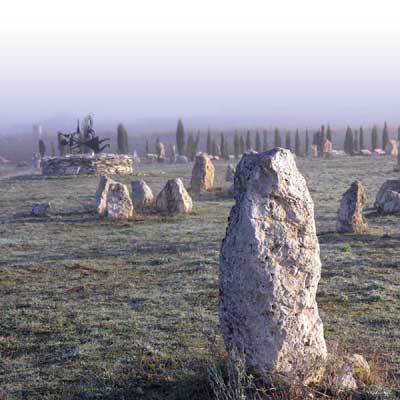 Pintia was a thriving Iron Age city in North Central Spain. At its dawn, around the 5th century BC, it was part of the Vaccean culture, an Iron Age people with Celtic links whom scholars believe crossed into Spain from Central Europe. In the 3rd century BC, the area came under attack from Hannibal, and within 200 years it had beeen absorbed into Roman Iberia. Pintia’s vast necropolis is proving a rich source of information about this relatively little known Vaccean culture. Here, excavation directors Carlos Sanz Minguez and Fernando Romero Carnicero, reveal the site’s latest finds.

Pintia is a vast and rich site. In addition to its large necropolis, it has a cremation area or ustrinum, a village, an artisan quarter, and a possible sanctuary, so far only identified by aerial photographs. Such is Pintia’s glut of archaeology that the 125 hectare site was declared a National Cultural Asset in 1993.
Who lived in this massive site? The answer is the Vaccaei, a people whose existence is hardly remembered in history. Though they lacked a written language, they organised their walled cities in grids and had complex beliefs in the afterlife. Moreover, judging by the affluence of the funerary objects we have found in the necropolis at Pintia, the Vaccaei were no ‘primitive tribe’. Indeed, the Classical author Diodorus Siculus described the Vaccaei as the most cultured people among all their neighbours. But how cultured? What do Pintia’s numerous burials tell us about its erstwhile dwellers?

Digging the dead at Pintia

Modern research at Pintia began in 1979 under the auspices of the University of Valladolid. But it was six years ago, after a pause of two decades, that we resumed our excavations on the Vaccean necropolis at Pintia. In our first season, we uncovered 70 cremation tombs. Since then, the excavation has continued uninterrupted, and by the end of the 2007 campaign we had completed the excavation of grave N˚ 147.

The Vaccaei cremated their dead, but the cremation was carried out in a different area to the deposition of the ashes. The actual cremation was performed in an area known by the modern name of Los Cenizales – a version of the Spanish word for ‘ashes’. From there, the cremated remains of the deceased were taken in an urn to a grave in Las Ruedas necropolis, which was founded around the end of the 5th century BC and remained in use for the next 500 years. The name Las Ruedas (‘The Wheels’) is thought to derive from the large circular stones which marked some of the graves in Roman times. We reckon between 20 and 30 generations of Vacceans and Romans were buried here, so with an estimated population of between 5,000 and 7,000 inhabitants at the city’s peak, we calculate there should be a total of between 60,000 and 100,000 burials awaiting us.

The Vaccaei’s belief in the afterlife often meant they took status symbols with them, indicative of sex, age and social position, in addition to provisions for their journey to the great beyond. Although highly symbolic in nature, the artefacts offer enormous potential for social reconstruction. The wide array of grave goods and offerings reflect the complexity of a hierarchical society ruled by a small military elite – whose necropolis is the subject of our current work.