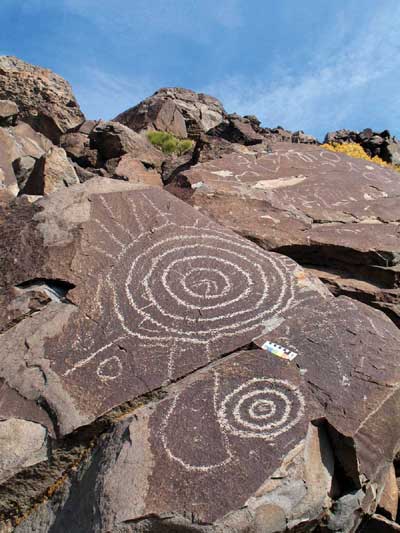 Nevada may be famed for Las Vegas, but its petroglyphs hit the archaeological jack-pot and need protecting. Rock art specialist Paul Bahn reports.

The world of rock art is one of archaeology’s most thriving and dynamic areas, yet it has lost many of its foremost scholars in recent years. A particularly sad and unexpected loss was, for me, the death of Alanah Woody, aged only 51, in July 2007.

Alanah was one of the principal American voices of reason in a field that had been swamped by the fad of interpreting all rock art motifs in terms of ‘trance’, ‘shamans’ and ‘entoptic motifs’ – akin to the odd visual effects often experienced during migraines.

Having completed her doctorate on Nevadan rock art in 2000, the indefatigable Alanah set up the Nevada Rock Art Foundation in 2002. Within a few short years, her Foundation had become arguably the most dynamic and active body of its kind in that country, and perhaps even anywhere in the world. She established a prestigious committee, with Prof. Don Fowler as President, and an ever-growing membership of willing and enthusiastic volunteers. Her foundation was pre-eminent in its mission of recording and preserving the rock art, as well as educating the young about its importance.

So it was that Alanah invited me to come out to give some talks, see some Nevadan rock art, and meet the Foundation’s members in October 2007. My trip went ahead, just as Alanah had organised it, but with her husband, Angus Quinlan, who stepped into the breach as the Foundation’s new Executive Director. He ensured that it all ran smoothly, with the invaluable help of many of the Foundation’s members who kindly took me out to some of the major sites and shared their insights and expertise with me.

I had already seen a little of Nevada’s rock art in 1990, in the Valley of Fire just east of Las Vegas. Most of the state’s art comprises petroglyphs – images pecked or carved into the rock, and the vast majority of these are apparently non-figurative (at least to the eyes of our culture). However, there are also some recognisably figurative motifs, including a few examples of what seem to be cowboys with hands in pockets or on hips! There are also some painted motifs (pictographs) in sites such as Brownstone Canyon, just outside Las Vegas and in Salt Cave, near Reno. As elsewhere, it is extremely hard to date any of this open-air art, although attempts have begun to be made, using organic material trapped in rock patinas – but these methods are still highly experimental and tentative.

Most motifs comprise geometric shapes, of which there is a vast variety, but among the specialities of the region one should mention contiguous triangles arranged in vertical lines, and also arrangements of dots in massed rows, inside grids or between parallel lines.