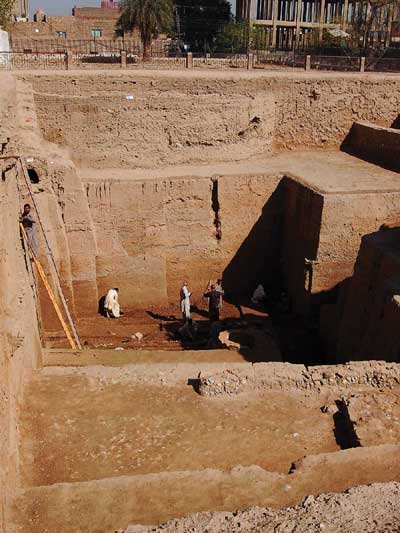 In the imagination, Peshawar is one of the great romantic cities of Pakistan. It is situated more or less at the top left hand corner of Pakistan, at the foot of the Khyber Pass which, since the time of Alexander the Great and his successors, has been the gateway by which invaders have poured down into the Indian sub-continent. The city of Peshawar is located at the entrance to the Khyber Pass and is dominated by the Bala Hisar Fort (Elevated Fort), a huge red-brick stronghold, greyed with the passage of time, with half rounded towers, founded by the Great Mughal Emperor Akbar and used as the Royal Residence of the Durranis until 1810 – when it had wonderful royal gardens. The British, when they occupied Peshawar, converted the mud-brick fort into baked-brick fort, giving it the present shape. The Fort today is occupied by the Para-military force of the Pakistani army which is responsible for border security and there is not much there for the tourist to see.

At the centre of the town, however, there is what should become an equally impressive monument. This is known as Gor Khuttree and will hopefully become a World Heritage Monument when the current work is completed. In one corner of it massive excavations are taking place, to reveal a section through the whole of the history of the town of Peshawar. But this is only part of Gor Khuttree.

Gor Khuttree (literally, ‘Grave of Kshatriya’, or Hindu warriors) in its present form was built in 1641 as a Caravansarai by Jehan Ara Begum, a Mughal Princess, the daughter of Emperor Shah Jahan who built the Taj Mahal. It was nearly 3 hectares in extent, and contained a Grand Mosque (Jamia Masjid), bathing facilities (Hammams) and two wells. Currently, it is partly enclosed by a high surrounding wall which was once provided with an octagonal turret at each corner, with cells for travellers around the enclosure wall, some of which are currently being restored.

The most impressive single building on the site is the Hindu temple. This may originally have been on the site of the mosque built by Jehan Ara Begum, but when the Sikhs occupied the site, they converted it into a Temple for the Hindu population of Peshawar. This was a political act rather than a religious one by the governor, General Avitabile (1838-1842) – an Italian in the service of the Sikhs – designed to enhance the religious harmony between the Hindu and Muslim population of Peshawar. The shrine was dedicated to Shiva, the third of the three great gods of the Hindu religion, with a smaller shrine to his bull Nandi, on which he rode. Today the shrine forms a fine architectural feature in one corner of the gardens to add to the architectural splendours of the gates of the caravanserai as a whole. Indeed the site may have had an even earlier religious significance.

But the large open area in the caravanserai, lying at the heart of the old city, was an enticing site for a large-scale deep excavation to try to provide archaeological evidence for the history of Peshawar. The site first caught the attention of Professor F A Durrani, of the University of Peshawar, who excavated there in 1992-3 and 1995-6 with some work continuing until 2000. He demonstrated the depth of deposit (48.5 feet), but could not reach to the logical end-point and to the virgin soil. In 2002 Professor Ishan Ali launched the current, large scale excavations, measuring 70m x 60m overall (35m x 30m vertical excavations which have now reached the maximum depth of 8.5m). He is Director of Excavations with Muhammed Zahir as his Field Director.

The main period was the Mughal era, which falls into two main phases, that is before and after the construction of the caravanserai in 1641. In 1526 the great conqueror Babur – who came from Uzbekistan via Kabul – passed through, and mentioned the site and its importance in his memoirs, The Tozuk; like Caesar, Babur wrote a full account of his conquests. In the earlier period there are two levels of construction, with numerous coins and figurines, and there is a rapid build-up suggesting considerable activity. However, in 1641 the caravanserai was constructed and activity was concentrated in the cells around the outside, and the excavation site became part of the open space at the centre of the enclosure, where no doubt huge numbers of pack animals could by accommodated.

But what happened before the Mughals? This question in turn depends on a further question – when did the Khyber Pass become the crucial link between India and Afghanistan? When was Kabul founded? The capital of Afghanistan lies 150 miles further west and forms the other end of the Khyber Pass and the implication is that Kabul, the Khyber Pass, and Peshawar all rose to importance with the coming of the Mughals. So what existed prior to the Mughal period?

The answer appears to be: quite a lot. The next historical date prior to the Mughal conquest is AD 998, when the Muslims from Afghanistan (led by Mahmud of Ghazni) conquered northern India and succeeded in establishing a kingdom for themselves in India with Lahore, and subsequently Delhi as its capital in 1206. The period 1206-1526 is known conventionally as the Sultanate period in Indian history. Already Peshawar was one of the main political centres of the Sultans, but it was not very glamorous architecturally. Archaeologically however it has proved very productive, for the excavations have revealed mud brick structures together with pottery and coins. The Ghaznavids, the first Muslim conquerors of Northern India (AD 998), enjoyed the most prosperous period at the site, represented by large-scale trading activities with Central Asia and Middle East.

The next big question is what happened in the Gandharan period (roughly 5th C BC to 5th C AD), the period contemporary with the Roman empire? This was the great age of Buddhism, when the classic Buddhist sculptural styles were established, not in Eastern India, where Buddha lived and set up his religion, but a thousand miles to the west, in what is now Pakistan. Was there already a town at Peshawar, a rival perhaps to Taxila?

Of the three capitals of Gandhara, Peshawar was the most prosperous and renowned. Peshawar, ancient Purshapur or Purushapura in Sanskrit, or Kanishkapura, was the capital of the Great Kushan Empire (c.AD 60-225), extending from Central Asia to the Bay of Bengal. As Gandhara was the second holiest place for Buddhists and as it was responsible for the spread of Buddhism to China, Korea and Japan (the present Buddhism of China, the Far East and Japan is the legacy of the Buddhism that was developed in Gandhara), pilgrims and travellers from these lands had visited and left their records.

However, there are numerous mounds in the vicinity of the city which may be the remains of stupas. Hiuen Tsang described Peshawar as Po-lusha-po-lu and had admired the great stupa of Kanishka built in Peshawar. According to him, it was the largest wooden structure in the world with the body relics of Lord Buddha. The stupa site was excavated by British archaeologists in the first decade of the 20th century, who recovered the famous Relic Casket, now in the Peshawar Museum, though the ashes and bones of Lord Buddha were given to a Society of Buddhists from Burma (modern Myanmar). A copy of the Relic Casket is in the British Museum. Though several Buddhist sites had been excavated in and around Peshawar, today most of them are either completely lost or under villages and towns. There is nothing so spectacular in the excavated area at Gor Khuttree. There is a hint that there may have been a religious site in the vicinity, perhaps even a monastery, for there are one or two broken statues, possibly parts of friezes which show Buddhist iconography.

Currently the excavations are penetrating down into the Indo-Greek period, conventionally dated from 195 BC to AD 10, when there are coins of the Bactrian Greek rulers, who minted coins in the Greek style. At Taxila this is the period when the great town centre at Sirkap is laid out on a rectangular grid in Greek style, with the first masonry buildings. Nothing like this has been located so far at Peshawar, but there is evidence for drains and bathroom structures and further evidence for metal working. Below this, the earliest levels found in the previous excavations by Professor Farzand Durrani revealed materials from the Mauryan period, in the 4th century BC, just after Alexander left. He also found some 5th century BC material in the Persian Achaemenid style, and this awaits the further stages of the excavations. Borings suggest that there is a considerable amount of archaeological strata still to be excavated: is there, perhaps, even an Indus Valley city of the 3rd millennium BC lurking at the bottom of the stratigraphy?

Peshawar is the earliest living city of the Indian subcontinent with a recorded/excavated history from the 4th century BC, and has never been abandoned. The present excavations have exposed a history of 2300 years whilst excavating 8.5m of cultural deposits, and the excavators estimate that there are 8m more before virgin soil is reached. Excavations still continue: will there be surprises yet to come?