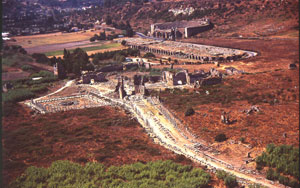 I have directed excavations at the city of Perge for over 20 years. To our joy, in 2009 it was proposed as a candidate to become a UNESCO World Heritage Site. But why is Perge so special and what have we been doing at the site? Exquisitely located just 11km from the Mediterranean coast, the city was founded atop a 60m high acropolis. Its history is both deep and complex.

According to the Classical author Strabo, the city was founded after the Trojan War by Achaeans under the leadership of Mopsus and Calchas. In fact, the site dates back to the late 5th millennium BC, and has been continuously occupied since the early 3rd millennium BC. It may have already been a key city by the 13th century BC – an inscribed bronze plaque discovered at Hattusas, the capital of the Hittite empire, mentions the city of Parha, which is thought to relate to Perge. Its name is also native Anatolian, rather than Greek, so it surely predates Mopsus and Calchas.

Whatever the case, it does seem that early Greek colonists assimilated with the local population and developed the already existing settlement. By the mid 1st millennium BC, Perge came under the rule of the Lydian and Persian kingdoms respectively. Come the 5th century, the city had been Hellenised, and after the arrival of Alexander the Great in 334 BC, it passed under the control of various Hellenistic kingdoms.

By then, the settlement on the acropolis had attained the characteristics of a Greek city and had spread down onto the plain. During these turbulent times walls were built around this ‘Lower City’ including a monumental gateway replete with round towers and a courtyard on its north side.

Later, Perge benefited significantly from the peace provided by the Roman Empire. With the Pax-Romana there was no longer a need for a defence system and the city expanded further towards the south. Indeed, Perge was particularly prosperous in the 2nd and 3rd centuries AD, during the Roman Imperial period. Most of what can be seen at the site today comes from this time, such as the theatre-stadium, macellum/agora, baths, monumental fountains, colonnaded streets, and the Western Necropolis.

With the weakening of the Roman Empire, in the late 3th and 4th centuries AD, the Isaurians (a tribe to the north of Pamphylia) revolted. As a result, in the 4th century yet another city wall was built – this time around the city’s southern extension. Perge enjoyed a final revival in the 5th and 6th centuries AD, as illustrated by a residential area and three unexplored Christian basilicas on the acropolis and in the Lower City.

As for archaeological excavations and restorations, they began in 1946, under Prof. Dr Arif Müfid Mansel (on behalf of Istanbul University). After Mansel’s death, Prof. Jale I.nan took on the project (1975-1988). My predecessors excavated a number of the civil and monumental buildings of the city – including the city gate, colonnaded street, fountain houses, macellum/agora, baths, and theatre – which yielded numerous well-preserved statues. However, I wanted to probe into the social life of the people who made these monumental buildings, so from 1989-1998, we focussed on the domestic and funerary areas of the site – notably with the excavation of the Western Necropolis. The latter contains a wide range of Roman era tombs belonging to people from all sectors of society – this seems to have been a deeply socially stratified city.

We have also been doing a great deal of other work – including research into pre-Roman Perge (in a joint project with Giessen Lustus Liebig University). We have excavated a number of shops on the north-south colonnaded street, found fragments of fine statues, and discovered a public building of yet unknown function (the ‘Z Building’). We have also been restoring the site’s Hellenistic towers, its ‘oval courtyard’, colonnaded streets, agora, Western Necropolis, and various mosaics from throughout the city. This means that visitors can now come and fully enjoy this ancient and beautiful city.