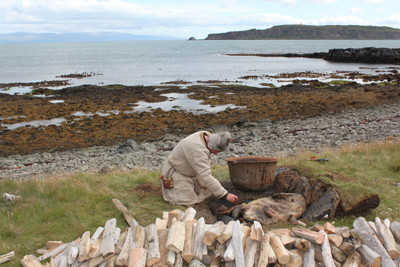 In the far north of Norway, deep in the Arctic Circle, more than 700 slab-lined pits have been found. In 1869, Nicolay Nicolaysen, Norway’s first state archaeologist, described them as either ancient graves or the foundations of turf houses. They are unique to this area, and all are within easy reach of the shoreline. But, rather than evidence of robbed graves or turf-covered houses, we now know they are all that remains of a once thriving industry producing marine mammal oil.

Rectangular, or sometimes elliptical, in shape, the stone-lined pits date from the beginning of the 1st century AD up to about 1200, with most belonging to the Late Iron Age, c.AD 600-900. Now, chemical analyses of organic materials excavated from inside these pits reveal that they were used to extract and collect oil rendered by burning the fat from the carcasses of whales, seals, porpoises, and large fish caught off the coast. This oil was a highly prized commodity with wide-ranging uses that included food, fuel for lighting and heating, and waterproofing for ships, clothing, and ropes.

The number and high density of pits found in these northern reaches, compared with their absence further south, suggests this was an activity developed and perfected by the indigenous people of Northern Scandinavia, the Sami. As a result, they were able to produce enough of a surplus to create a complex marine economy, trading the oil for iron, jewellery, and other goods from their Norse neighbours in the south – evidence for which is provided by finds of these luxury items in Sami graves.

Clearly, this was production on a scale that easily surpassed the needs of local consumption. But how much oil was actually produced from each pit? And how did the process work?

Archaeologists are now investigating what remains of these slab-lined pits. The most recent and extensively excavated are those at Sijkaervika, near the fishing village of Hammerfest on the main island of Kvaloya, perched high within Norway’s Arctic Circle. Radio carbon-dating indicates the site was occupied from the beginning of the 1st century AD until c.1700. The structures range in size from between 2m and 4m long, by 1m and 2m wide, and are dug about 0.3m to 1m into the ground. The bottom and sides of the pits are lined with flat stones. Chemical analyses of organic materials show that the pits were used to burn marine mammal fat. A huge concentration of ash was found in one of the smaller pits; around the surrounding walls were lumps of organic material comprising solidified oil, blubber, and charcoal, as well as stones and fire-cracked rocks that had been thrown out of the pit after burning. Although the archaeology provides us with evidence of the practice, the techniques involved can only be surmised. Norwegian archaeologist Gørill Nilsen decided to put these theories to the test by recreating the process, thereby gaining a better understanding of the skills that enabled this Iron Age community to survive in such a hostile landscape.