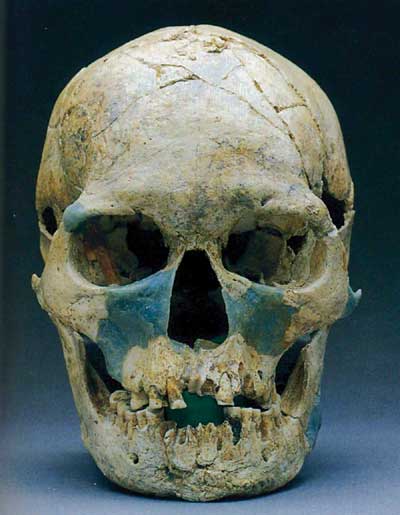 Four hundred miles to the south of Japan is the island of Okinawa – the largest of the string of islands known as the Ryukyu Archipelago. Today the archipelago is warmer than mainland Japan: a semi-tropical paradise with wonderful sandy beaches surrounded by coral reefs. Indeed, the name Ryukyu can be translated from Chinese as ‘spheres of lapis lazuli’, referring to islands surrounded by brilliant blue lagoons, scattered in the East China Sea.

Despite this idyll, to many in the West, Okinawa conjures up terrifying images of World War II battlefields before its subjugation by the Americans, who used it as a stepping stone for the conquest of Japan itself. Today, Ryukyu is the southernmost prefecture of Japan. However, it is only 400 miles from both Taiwan and mainland China. How far has Ryuku always been part of Japan? Or are there cultural influences from China or Taiwan? Moreover, who were its erstwhile inhabitants? When did they first arrive? We know they were long-distance traders who developed a kingdom, but exactly how rich did they become?

Several decades of intensive government sponsored research make the islands one of the best studied areas in the world. A number of the sites are so important that they have been designated as World Heritage status. Yet, the region is still almost unknown internationally. So here we offer a round-up of the latest digs and discoveries from the islands of the coral seas to chart the rise, rise and rise of Ryukyu.

In charting the occupation of the islands, we wanted to know who were the first people on the islands? There are about six limestone cave and fissure sites on the islands that are providing answers. They have revealed human bones dating to around 30,000 to 20,000 years ago. The oldest evidence comes from the Yamashita-cho Cave, in an outcrop of coral limestone in Naha City, the prefectural capital of Okinawa. This site yielded the bones of a six year old girl who died around 32,000 years ago. A second site, the Minatogawa fissure in southern Okinawa Island, contained animal bones plus the skeletal remains of five humans dating to around 18,000 years ago.
These mysterious cave deposits indicate that a population of modern Homo sapiens, similar to those living in South China, probably entered the region from South China on ancient land bridges connected to the China mainland. The environment would have been cooler, without the coral reefs that mark the area today. However, the data caused a conundrum. There is a big gap in our information. To date, we have found no sites post-dating 18,000 years ago until about 6,500 years ago. So what happened to the earlier islanders? Why do we have no evidence for some 10,000 years?

Their islands shrank dramatically with rising sea levels at the end of the Pleistocene (from 18,000 down to 10,000 years ago) and it seems that they were left with too little territory to survive. However, it is strange that none of their sites have yielded any tools.