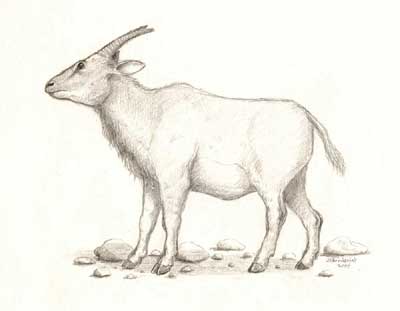 In 1909, Dorothea M.A. Bate of the London Natural History Museum gave Myotragus balearicus its formal description as a new species in a scholarly publication. Miss Bate had discovered bones of this ruminant during her wanderings through the Mediterranean (that also took her to Crete, Cyprus, and the Levant). She immediately noted that the skeletal evidence had characteristics found in bovid ruminants, such as cattle, sheep and goats – notably the presence of horns – but that it also possessed an ever-growing incisor tooth much like the one found in mice and other rodents. Bate announced that she had discovered a new species and coined its name Myotragus (from the Greek, Myo-mouse; tragus-goat).

The cave of Muleta (Cova de Son Muleta), halfway between Deià and Sóller has been particularly fruitful to the study of the mousegoat since it has yielded the remains of some 3500 mouse-goat specimens. The cave, discovered by William Waldren and colleagues, had acted as a natural trap: the animals would enter, fall down a vertical shaft to their death, and become heaped up on top of their unlucky predecessors. The bones from the cave of Muleta represent one of the richest samples of any extinct island faunas from the Pliocene and Pleistocene. It is thus of great importance for our understanding of the endemic evolution of island mammals in general.

The mouse-goat is particularly interesting since it was the only “large” mammal to inhabit Mallorca until the arrival of the first Neolithic seafarers. Indeed, apart from birds, lizards, frogs and bats, the only other vertebrate fauna of the Balearic Islands was a dormouse and a variety of shrew. There were no other mammals.

Such an unbalanced mammal fauna was the typical situation on Mediterranean islands during the aforementioned periods, and has been the normal situation on islands elsewhere too. ‘Naturally’, island faunas are always rather impoverished as a result of their isolation – owing to the difficulties with which the islands are reached, and as a result of strong competition between the colonizers. Moreover, rarely do predators reach an island, with the result that the animals that live on it can evolve without developing defence mechanisms or defensive instincts. The mouse-goats were utterly unaware of the danger that the newly arrived Neolithic human intruders would come to pose, as we shall later discuss.

The question of how Myotragus got to the islands in the first place has an ecological answer. Shortly after six million years ago, the Mediterranean Sea went through an ecological crisis known as the Messinian Crisis. For some reason, the straits of Gibraltar closed and the entire Mediterranean basin dried up because river discharges could not catch up with evaporation. The higher parts of the basin became land and large parts turned into saline deserts. Thick formations of salt and gypsum formed and only the deepest basins remained filled with a salty brine. Islands thus became connected to the mainland or to each other, allowing terrestrial fauna to move to and fro, only restricted in their movements by inhospitable salt plains.

Myotragus is such an interesting animal because it is one of the very few bovid ruminants to be found in an island environment. The only other known examples are from islands off Southeast Asia, such as the dwarf cattle or Anoa (Bubalus depressicornis) from the Indonesian island of Sulawesi (Celebes). However, deer (also ruminants, but carrying antlers instead of horns) are more common on islands, and several fossil deer species are known from Sardinia, Crete, and Karpathos in the Mediterranean Basin. In addition, Myotragus is a prime example of a mammal that underwent island evolution.

In the absence of mammalian predators and competitors it could evolve from a normal Alpine chamois-like animal to a small, stocky, slow-moving and probably rather clumsy looking goat. From early in its evolutionary history, its members became extremely short, lowering the centre of gravity so that it was more stable while climbing the Mallorcan rocks.

Among the sample from the cave of Muleta, William Waldren also discovered injuries in some skulls, indicating that – probably – males had occasional fights. Another function of the horns might have been a defence facility against avian predators: there were no tigers or wolves on the island, but large birds of prey were a constant danger, especially for the rabbit-sized young.

In its peculiar insular mode of evolution, Myotragus can be compared with the other ‘large’ island mammals. The dwarf elephants known from Crete, Malta and Sicily, and also from Indonesia and California, the dwarf hippos from Crete and Cyprus, and the small Cretan deer all fit in the same evolutionary pattern: that of diminishing sizes. Moreover, in the extended range of its bodily sizes, Myotragus fits in the same evolutionary pattern as do the famous Darwin’s finches from the Galapagos Islands, the mentioned Cretan deer, and even the cichlid fishes from the African great lakes. It is the pattern of genetic drift, leading to a greater variation in physical characters and, ultimately, to new species. If we fully understand Myotragus, we fully understand island evolution. Therefore, it is of great importance that Waldren’s collection of Myotragus material is being preserved and studied.

The extinction of our little friend probably came rapidly. Palaeontologists like to refer to this phenomenon as the ‘Blitzkrieg Model’, after the German expression for a quick and effective invasion and occupation of foreign territory. The ‘dodo effect’ is probably a less history-biased phrasing. This enigmatic bird, also rather clumsy, slow moving and highly adapted to its own island, was first described in 1598 by Dutch sailors. At that point, it was being used as livestock and meat supply. It became extinct in less than a century after its discovery.

One reason for its rapid demise was certainly the sailors’ appetite. But more important was the vulnerability of the animal itself, a vulnerability that is characteristic of all isolated island species. Therefore, we can be quite certain that Myotragus had no physical, behavioural or instinctive methods to defend itself against the first Neolithic settlers.

Three questions remain: when did these first settlers arrive, how and for how long did these human intruders interact with the animal, and when did Myotragus finally become extinct? These questions are contentious and have led to sometimes bitter discussions among the scientists involved in research of the Balearic prehistory. To answer these questions, we need to amass more examples of properly excavated material: we need well-identified material and unequivocal Carbon-14 dating.

However, our present thinking is that humans arrived on Mallorca around 5000 years ago, maybe even somewhat later. The Valldemossa – Deià – Sóller coastal regions of the island of Mallorca are rich with Neolithic remains including megaliths, rock-shelters (or abrigo), open-air settlement and ritual sites, many of which were under investigation by William Waldren and his staff with the aid of Earthwatch Institute digging teams.

Moreover, by examining Myotragus as just one of many vulnerable island species, we can be quite certain that its extinction occurred within a short period after the first Neolithic people arrived. Intensive hunting facilitated by the animals’ innocence, human disturbance to its ecosystem, the introduction of predators (dogs), plus our introduction of food competitors (pigs, sheep and goats) and other such influences must have led to a quick extinction. The parallel with the dodo is not only academic: it might have occurred within the time-span of a few centuries.