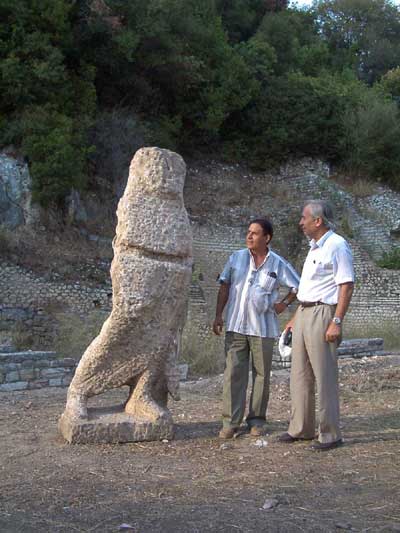 Muzafer Korkuti, Director of the Institute of Archaeology in Albania since 1998, is a thoughtful scholar who modestly conceals a fascinating education of the kind none of us are likely to have again. Interviewed over lunch, he was at first shy to describe how he became an archaeologist and how his career unfolded, and only after an hour, did he become more strident and confident as, I think, he began to appreciate the patterns emerging in the story he was telling. On the other hand, I was not in the least surprised by him because he is the rarest of archaeologists – a product of Stalinism and a student in Leningrad, who spent ten months in China during the Cultural Revolution, studying and on excavations, and has more recently co-directed two major projects with senior American archaeologists.

We talked over lunch in one of Tirana’s fashionable Italian restaurants following a book launch in the Academy of Sciences. MK, as he is often known, was ebullient. Fourteen books on Albanian archaeology were published in 2004, mostly by members of his Institute. The launch in the Academy of Sciences had been an occasion for this normally reserved man to effusively blow his trumpet. The following day, what is more, the government would designate nine new archaeological parks. Archaeology is thriving in Albania, he ventures. His sense of pride and amazement is palpable.

Muzafer Korkuti was born in southern Albania sixty-nine years ago. The republic was little more than twenty years old, and gravely impoverished in the aftermath of the end of Ottoman dominion. He had a desire, he said, to work with ‘things’ that he could touch, and yet he confessed to a pleasure in cerebral disciplines such as mathematics and physics. So, it was no accident that in 1955, as befitted the communist planning he was first an elementary schoolteacher in a village called Fterë in the Adriatic coastal district of Vlora, and then the school’s director. On New Year’s Eve in 1956, his life changed forever. Summoned with his brightest students to the Palace of Brigades in Vlora, they made a presentation to Enver Hoxha, Albania’s quixotic communist dictator. As MK put it, filled with the spirit of socialism, they presented themselves ‘with emotion and affection’. A year and a half later, MK was summoned to Tirana to study whatever he wanted at university. At first he thought of being a physicist, then he appreciated the presence of the Soviet archaeologists in Albania, and attracted by the prospect of fieldwork, spent three happy years training as an archaeologist. At Apollonia, working alongside the Soviets, he found a marble bust of Demosthenes.