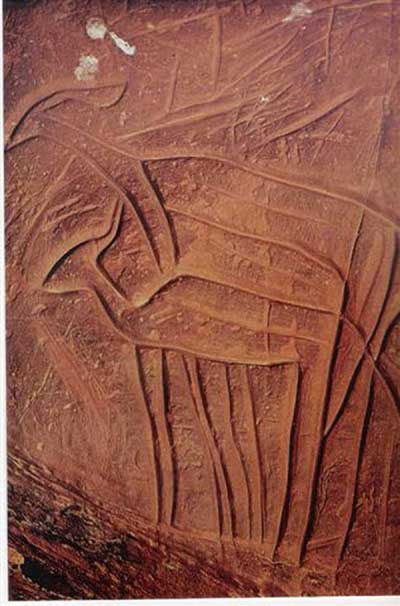 Morocco is a land rich with rock art: to date, over 300 sites have been catalogued. The vast majority contain engravings, with as yet only a few dozen known with paintings. It was therefore very exciting, a few years ago, after a two hour drive in a Land Rover over very sandy terrain in the Moroccan near-desert, to find myself looking into a rock shelter full of painted images!

Expecting to find an open-air site with engravings, I was ill prepared for photography in a low, dark semi-cave of Aouinate. Nonetheless, in the event we were able to record about 100 red-ochre paintings. The most striking scene – visible when lying on one’s back looking at the cave roof less than a metre away – consisted of a line of ostriches and a giraffe following two archers (each with penis and testicles), holding hands. The two archers faced two other similar figures, one sexed and carrying a bow. No other rock art site in Morocco has paintings of this type.

These human figures, with their oval heads, prominent buttocks and powerful thighs, recalled at once the 2nd or 3rd millennium paintings of the central Sahara. However, two painted chariots, thought to have been introduced into Morocco much later, were a disconcerting element among these fat-bottomed figures. The date of the paintings therefore remains open.

There are hundreds of thousands of ancient images engraved or painted on rocks in the Sahara. By studying these images it should be possible to see what solutions they had adopted and to learn from their experience. Teams were therefore asked to look at engraved and painted images “with new eyes”.

A three year project was thus drawn up, involving archaeologists and geologists from Morocco, Algeria, Egypt, France, Italy and Tunisia. It aimed to study the rock art of the Sahara to discern adaptations to climate change; and secondly to preserve this important element of the world’s cultural heritage for future generations. This second objective was particularly urgent because of the increasing destruction of the rock-art images by natural and human action. The involvement of local populations at all levels was considered essential by all participants in the project.

Sahara to discern adaptations to climate change; and secondly to preserve this important element of the world’s cultural heritage for future generations. This second objective was particularly urgent because of the increasing destruction of the rock-art images by natural and human action. The involvement of local populations at all levels was considered essential by all participants in the project.

At the very end of our stint in south Morocco, we studied a site which showed that the people here, in addition to engraving cattle similar in style to nearby sites, were also engraving Barbary sheep. The Barbary sheep is known for its drought-resisting capacities and on this particular site seems to have taken the place of the antelope, a previous favourite animal for the larder. This is an animal seldom found on the earlier Moroccan rock art sites, and its presence made me wonder if we were witnessing an adaptation to increasingly dry conditions. This is certainly an idea that I plan to follow up.

Though I have specialised in rock art, I have also managed to be part of a wide variety of digs. In the vicinity of Casablanca in the North West, I helped to excavate a number of sites including the highly significant Lower Palaeolithic site of the Thomas quarry. There, the oldest material, including well-flaked hand axes, was dated to about a million years ago; with human remains dating back to around 300,000-500,000 years ago.

However, to my mind, more exciting and spectacular was the neighbouring quarry site of Oulad Hamida, which was packed tight with animal bones. There, an unusual feature was the numerous rhino remains, including upsidedown skulls. It would seem that the locals had a distinct taste for rhino meat – though they were certainly incapable of doing anything other than lie in wait for a young, sick or old beast. Dating on the rhino tooth enamel showed the site was occupied about 600,000 years ago. As we worked, the whole area was being in-filled with building rubbish, which added some ‘excitement’ to the dig: we were constantly interrupted by warning shouts from above that dynamiting was about to take place, causing yet another slab of cliff to come down.

Moving to the Atlantic coast in southern Morocco, we also recently recorded some 25 monuments rising above the plain over a distance of about 20km overlooking the River Chebeika. The monuments included tumuli with long ‘arms’ or antennae often curving out over 100m, stone platforms, flat circular areas defined by small smooth stones placed side by side with a loose infilling of pebbles, crescents, circular or ellipic stone-bordered enclosures with a central corridor leading to a tumulus, and variations on all these themes. Without excavation, it is impossible to be sure that these structures are funerary and certainly impossible to give them a date, though they are clearly prehistoric.

And so, from my archaeological start, working on the prehistory of the wet Inner Hebrides, I have found myself working on equally stunning terrain, but many miles away in Morocco. As my work continues, I remain struck by the fascination of our prehistory and the ways by which we can learn from the past.