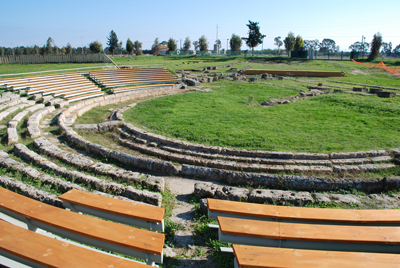 The fate of the inland cities of Southern Italy depended to a considerable extent on the fortunes of the Greek colonies springing up along the coast; and for Botromagno in particular, on those of Metapontum near the mouth of the Bradano River. The greatest of these colonies was Tarentum (modern Taranto), founded in the 8th century BC with a superb harbour right on the instep of Italy’s heel. Metapontum (modern Metaponto) lay 30 miles along the coast to the west. This colony was never as important as Tarentum, and was also overshadowed by its westerly neighbour, Sybaris. Despite lacking good harbourage, Metapontum grew rich off the fertility of its land. This agricultural prowess was proudly displayed as an ear of wheat on the city’s abundant coinage. Such material wealth, however, pales before its intellectual riches. Pythagoras settled here in the 6th century BC, after fleeing political upheaval in the colony at Croton, and it was at Metapontum that he undertook his greatest work. Yet Pythagoras’ theorem was to endure better than his adopted home, and by the late Roman period Metapontum had withered away to nothing. Why?

The rot set in during the 3rd century BC. Metapontum, like most of the Greek colonies, eyed the expansion of Rome with considerable trepidation. Thus, when Hannibal invaded, its citizens quickly succumbed to the temptation to embrace him as a saviour. Livy records that they declared for Hannibal after the Battle of Cannae, a move that swiftly saw them saddled with a Roman garrison. When this was withdrawn to bolster the garrison at Tarentum in 212 BC, the Metapontians seized their chance to throw off the Roman yoke and invited in a Carthaginian garrison. But Metapontum had acted prematurely yet again, and when Hannibal’s brother was defeated at the battle of Metaurus a mere five years later, the Carthaginians were compelled to withdraw. Hannibal transferred the city’s citizens to friendly territory in the toe of Italy at Bruttium, in an attempt to spare them from Roman reprisals.

Presumably, this means that Metapontum was substantially deserted by the end of the 3rd century BC. Both the historical and archaeological records indicate that the settlement limped on, with Cicero (106-43 BC) visiting the town. But by Pausanius’ day in the 2nd century AD it was in a very sad state, with little more than its ruined walls surviving. Thus, at the height of the Pax Romana, when towns across the Empire were flourishing, Metapontum simply faded away. But its demise may have been speeded by more than just political disasters: it appears that the groundwater was rising, and the land was becoming swampy. The public monuments were weakened by the growth of the waterbearing stratum, with the sturdiest elements reused to produce lime or build crude houses and tombs. Did malaria also play a part?

The collapse of urbanism at Metapontum has spared the site from the depredations of Medieval or, indeed, modern successors. Today, there is only a small village on the site – together with a lido on the coast, now several miles distant. Its archaeological potential remains largely untapped, as only 2% of the site has been investigated. An archaeological park does, however, encompass a small but important part of the centre of the city. The finest surviving temple, however, lies outside the city limits. Popularly called the Palatine Tables, this is an elegant Doric temple of the 6th century BC dedicated to Hera. Does it owe its survival to being some sort of sanctuary, which thereby evaded the destruction of the town itself?