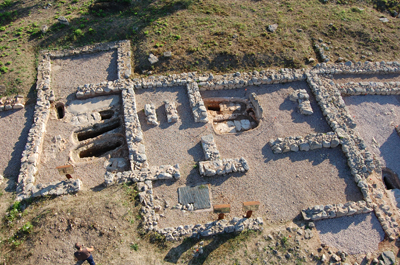 During the Roman Empire, Mallorca enjoyed a stable, prosperous career centred at the cities of Pollentia in modern Alcúdia to the north, and Palma, the current capital, in the west. Roman consul Quintus Caecilius Metellus conquered Mallorca between 123 BC and 121 BC, although the cities developed during the 70s BC after the Sertorian wars ended. Thus, there was a military and settler component to the islands. It was also the spot to which unwanted politicians were banished – one such being Publius Suillius, related by marriage to and mentioned by Ovid, who was exiled to the island during Nero’s reign on charges of corruption.

And then the Vandals appeared in the 5th century. They first came just to pillage in 425, but then stayed and ruled the entire archipelago from 455. Originally one of many Germanic tribes that fled westward to avoid attacks from the Huns, the Vandals in the 5th century quickly became one of the most powerful forces in southern Mediterranean. After various incursions into the region, the Vandals settled in southern Spain between 422 and 428. From there they ventured into northern Africa where they founded a kingdom in 442, and began military expeditions to Sicily, Sardinia, Corsica, and the Balearics – taking control of the latter immediately prior to sacking Rome in 455. From their base in Carthage, in modern-day Tunisia, the Vandals created a network of strongholds in the Mediterranean – including Mallorca, Corsica, and Sardinia – to impose their will on the conquered Romans.

The Vandal conquest endured until 533 when Justinian I, emperor of the Eastern Roman Empire based in Constantinople, began a quest to recapture the former Roman territories in the west and sent a force to evict the Vandals, led by the general Belisarius. After routing the Vandals around Carthage and freeing the city of its foreign occupiers, part of the Byzantine fleet did the same to the Mediterranean islands. The Byzantines then conquered parts of south-eastern Spain, but lost them to the Visigoths in the early 7th century. With the Iberian peninsula lost, the Balearics became the western-most edge of the Byzantine Empire. Historians put forth the idea the archipelago belonged to the Mauretania II province, administered by Septum – modern-day Ceuta – a Spanish city on the Moroccan coast.

Several of the existing archaeological sites on the Balearic Islands dating from the Byzantine era suggest a military use. In the forum of Pollentia, archaeologists discovered that the Byzantines used pre-existing structures such as the Capitoline Temple to build a fortification at the highest point of the city. Likewise, at Can Pins on the nearby island of Formentera, archaeologists uncovered a square fort with towers at each corner, a characteristic that has led scholars to compare it to the Byzantine strongholds in North Africa. But while the architecture suggests proximity to Northern Africa, the mosaics found at Son Peretó display artistic styles closer to the traditional schools in Constantinople.

Religion played an important role as well. The Byzantine churches on the islands thus far studied and excavated include Son Bou (Alaior), Cap des Port (Fornells), Fornàs de Torelló (Maó), and Illa del Rei (Maó) in Menorca; and Cas Frares (Santa Maria des Camí), Son Fradinet (Campos), and Son Peretó in Mallorca. The study of these basilicas and excavation work has led archaeologists to two arguments: that these rural parishes acted as gathering points for dispersed communities, or that they were established to stamp out the remaining pockets of Paganism and replace it with Christianity.