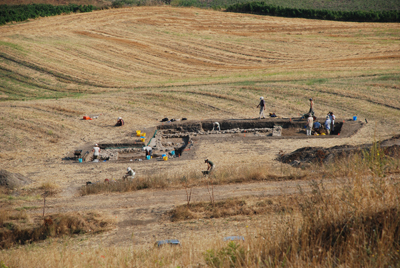 Throughout most of Italy, the 2nd and 1st centuries BC were a time of increasing prosperity. Towns sprang up and flourished, while the countryside grew ever more affluent. There is only one blot on this picture of rude economic health: the area of southern Italy we are examining. Growth appears particularly stunted in the vicinity of Gravina. Although close to the Via Appia, survey has revealed few sites dating to the opening centuries AD, and the absence of a major economic centre is equally perplexing. The nearest Roman town, Venusia, lies 40 miles to the north west. Now, new research has provided an explanation: the area appears to have been a vast Imperial estate.

Alastair Small and his team from the University of Edinburgh have been excavating a tile works in open countryside at Vagnari (pronounced Vann-uri) since 2000. In 2001, the archaeologists discovered a broken tile with a stamped inscription in the top soil over one of the kilns. Frustratingly, only a portion survived, but two lines could be made out reading GRA along the top and CAES underneath. This was likely to be the name of the officinator or manager of the tile works: but what was the full text?

When they took the tile back to Gravina and showed it to some local archaeologists, one of them said: ‘I wonder if Antonio has anything similar?’ Antonio, it transpired, is a local businessman, and fieldwalking whiz, who is often to be found pacing the farmland of the Gravina area gathering n the ceramic harvest. He saw the tile and said ‘Yes, I think I have something similar’. Rummaging in the loft where his bulkier finds reside quickly yielded another stamped tile, which he had found 11km away. This time the left end was broken off, but by combining the two tiles, the stamp can be read in its entirety as: GRATI CAESARIS. This means ‘of Gratus, of Caesar’, indicating that the tile was made by Gratus, a slave of Caesar. Gratus is a well-attested slave name and this, coupled with absence of the tria nomina – three names – of a Roman citizen, makes it likely that he was not freeborn. The suggestion that Gratus was property of the emperor is even more exciting. The use of ‘Caesaris’ can be dated approximately to the first half of the 1st century AD, for only Augustus and his immediate successors proclaimed their descent from Caesar in this way. From the advent of the Flavian dynasty onwards (AD 69), emperors simply styled themselves AVG, in honour of Augustus himself.

In sum, this implies that Vagnari was an early Imperial estate. Such landholdings were not managed by the state – that is, by the Senate for the people of Rome – but by the emperor as a ‘private’ citizen and for his own enrichment. The emperor held many estates throughout the Roman world, sometimes confiscated from senators who had transgressed, more often confiscated from tribes or cities that had transgressed. Emperors needed lots of money to satisfy the many demands made on the Imperial purse, and their estates provided the source of these funds. If Vagnari did indeed become a Roman Imperial estate, it was the lowest of the low. In Arnold Toynbee’s terms, a powerful expression of Hannibal’s legacy.