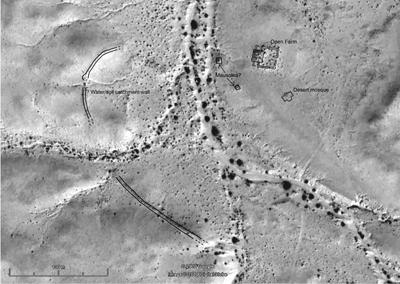 At the time of writing, the Libyans are engaged in bitter civil unrest. Battles between the rebels and the incumbent Gaddafi regime in Tripoli have ebbed and flowed around the North Libyan shores of the Gulf of Sirte. The struggle echoes past warfare, both ancient and modern, fought over the same territory, as revealed in a major archaeological survey in the Sirte Basin.

Between 2007 and 2009, we documented hundreds of previously unknown sites and artefacts of all periods – from Middle Palaeolithic to the 20th century. Yet, in most periods, it is the frontier character of the region, both politically and economically, that stands out most clearly.

Largely made up of featureless desert, a rare early 19th century visitor trudging along the edge of the Gulf of Sirte, complained that ‘few parts of the world will be found to present so truly desolate and wretched an appearance as its shores in this neighbourhood. Marsh, sand, and barren rocks alone meet the eye and not a single human being, or a trace of vegetation, are to be met with in any direction’.

Despite its ‘wretched’ and ‘desolate’ appearance, archaeologist Richard Goodchild’s work in the late 1940s and early 1950s demonstrated that its coastal route was in regular use in the Roman period. Forts, roadside settlements, and other fortified posts punctuate the coastline of the Gulf of Sirte, uninvestigated and largely untouched. On the east side of the Gulf of Sirte lies the remains of a major Greco-Roman port at Mersa Brega (ancient Kozynthion), an important Greek and Roman settlement at Ajdabiyah (ancient Corniclanum), and a second smaller settlement, with impressive Byzantine fortifications, a few kilometres further east at the site of Boreum. Goodchild identified copious non-local pottery that indicated thriving maritime and terrestrial trade routes. Classical texts, plus travellers’ accounts, also mention ancient sulphur and gypsum quarries in the region, and suggest the likelihood of ancient salt production along the coast. The fortification of many of these sites – particularly in Late Antiquity – speaks of a perceived serious threat. This was a zone that was more desirable than first meets the eye.

Indeed, while current news reports focus on battles over the area’s oil towns, they inevitably tend to forget that people have fought over the Sirte Basin for millennia. In pre-Roman times, it had become a turbulent military buffer zone that formed a boundary zone between the two great centres of ancient Libyan urban civilisation: Punic Tripolitania to the west and Hellenistic Cyrenaica to the east.

Moreover, if the Classical texts are to be believed, it was once also fairly well occupied: Herodotus (c.484 BC – 425 BC) and his successors observed that the area was occupied by two significant groups of local people, or tribes, known as the Macae and the Nasamones. Of these, most was written about the Nasamones, said to be a powerful tribe based in the oasis of Aujila just south-east of the Sirte basin and one of a string of desert oases extending to the great Siwa Oasis in the east. While we are told that they exploited the resources of the southern and eastern coasts of the Gulf of Sirte, the ancient sources mostly seem to describe a pastoralist society, rooted in the desert. As Herodotus tells us:

They [the Nasamones] are a numerous race, who, in the summer, leave their flocks behind by the sea and go up to the region of Aujila togather the fruit of the date-palms, which grow in great numbers, very large and are all fruit-bearing; they hunt the wingless locusts, and they dry them in the sun and then pound them up, and after that they sprinkle them upon milk and drink them.’ (Histories, II, 32-33)

Yet to outsiders, the Nasamones were also renowned as ruffians looting the many ancient wrecks that stranded in the treacherous shallows of the Gulf of Sirte. These ‘barbarians’, would later become the target of repeated Roman ‘campaigns of pacification’ (in 20 BC, 15 BC and AD 85-86). References to tribal assaults on Hellenistic Euesperides (near Benghazi ) and the subsequent Roman campaigns against them indicate their unwillingness to be brought under the centralised control of the coastal city states. The Classical texts were less forthcoming about the Macae on the west (Punic) side of the Gulfs. But at least they did record these people – archaeologists, however, had not.