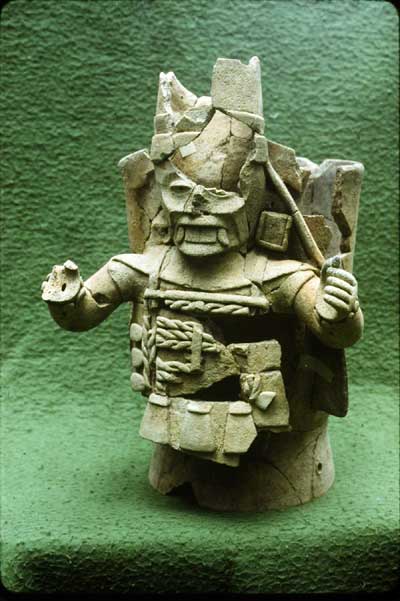 Early Maya scholars articulated a vision of catastrophic cultural decay. It was thought that some widespread calamity – war, famine, plague, or the like – quickly engulfed the entire Maya world at the end of the era known as the Classic period (c. 250 to 900 AD, see timeline). As archaeological knowledge about the Maya grew, however, such ideas proved too simplistic. Instead, archaeologists identified a myriad of reasons for the abandonment of Maya cities, varying from region to region and even from site to site, and extending over a much longer period.

Collapse of the Maya?

So did the Maya really undergo a comprehensive collapse in the 9th century as was previously assumed? Early archaeologists termed the time after the Classic period cultural zenith of the Maya the ‘Decadent Period’, a name that reflects their perception of a culture in ruins. In fact, ever increasing evidence shows that some Maya sites continued, and that new ones emerged in the period archaeologists now call the Postclassic (c. AD 900-1540). Though the later sites are admittedly rarely as spectacular as those of the Classic period, there are exceptions. One such is the stunning site of Lamanai in northern Belize.

Archaeological excavations at Lamanai ran from 1974 to 1986 under David M. Pendergastof the Royal Ontario Museum. During those seasons, Pendergast investigated most of the major Precolumbian monumental pyramids and major building complexes that are now visible in the site core, as well as smaller buildings and the Spanish Colonial churches. Pendergast’s work established the amazing longevity of the site, and its importance in northern Belize. Most of the major buildings excavated by Pendergast have now been consolidated by the government of Belize and the site and its museum have become a popular, albeit remote, destination for visitors.

In 1998, new investigations were initiated by Elizabeth Graham of UCL. Graham is interested in what she has called “critical periods of transition” at the site, including the changes that occurred between the Late Classic and the Postclassic, and the profound changes associated with Spanish colonization. Since 2003, Graham and Scott Simmons, from the University of North Carolina, Wilmington, have served at Lamanai as co-Principal Investigators, and Simmons’ research has focused on the production of copper at the site, another fact that makes Lamanai a special place in the Maya world. Since joining the project in 2002, my role has been to focus on stylistic analysis of the pottery. Linda Howie of the University of Sheffield has been using scientific analysis (thin-section petrography and Neutron Activation Analysis) to add much needed detail to our knowledge of how the ancient Maya made pottery, including the sources of the clay. Along with research by several others at the site, our recent work is adding detail to our understanding of Lamanai’s social, economic, religious, and political organization through time.

As is the case in much of the Maya world, Lamanai rode from the Preclassic into the subsequent Classic period on a wave of monumental building construction that includes pyramid N9-56, built in the Early Classic period. It was adorned with large stucco masks and the dead were buried deep within the structure. One of the two tombs that have been excavated contained the remains of an elite woman; the status of women at Lamanai could be high, as it could be right across the Maya world.

The Classic period at Lamanai is, as elsewhere in the Maya lowlands, a period of spectacular achievement. This was a complex, literate, stratified society governed by divine kings, priests, and their administrators. Major regional centres like Lamanai were surrounded by a network of smaller towns and villages engaged in brisk trade and the production of everything from elegant polychrome pottery to granite grinding stones. People probably travelled in from these smaller sites, on foot and in canoes, on regular market days and for largescale religious celebrations. Nobles from distant sites would have visited Lamanai to create and maintain political and economic alliances.

The end of the Classic: a new beginning.

Archaeologists call the end of the Classic period the Terminal Classic (c.800-900). At this time hundreds of cities were abandoned across the Maya region. In striking contrast, the people of Lamanai continued to build and renovate structures like the massive Jaguar Temple (shown on the first page), a building that continued to be used and revamped for centuries. This is remarkable given that at the site of Colha, just 30 km to the northeast, elite people – associated with such monuments – were being decapitated and dumped into a pit and the site was in chaos!

Lamanai was a success, thriving right up until the arrival of the Spanish in the 16th century, while small-scale occupation continued through the colonial period as shown by Spanish accounts and the two churches at the site.

Within the collection, there are some wonderful imported pots, for example the highquality “Fine Orange” pottery that is produced in the Usumacinta River drainage of southeast Mexico, some 200 miles away. However, such imports are scarce – locally made vessels are far more common. Though vast amounts of pots may not have moved, people definitely did. The pots show that a great deal of stylistic copying and sharing was going on between people throughout the vast Maya lands.

Such connections were aided by Lamanai’s strategic location on the New River that would have provided a trade link between the Caribbean coast and the inland southern Maya region.

By examining the pottery, we can thus place Lamanai within a web of other Maya sites. So far, I have found that the pottery connects Lamanai with sites to the northern Maya lowlands – the area that boasts some of the most important sites of the Terminal Classic and Postclassic periods – and with the southern Maya lowlands – the original heartland of Classic Maya civilisation.

In some ways, the “collapse” of Maya civilization can be viewed as a social response to the large elite group whose demands for large scale architectural construction, tribute in goods, and service in warfare must have been an increasing burden on ordinary Maya from the Preclassic on.

This was not a total collapse, but primarily an elite collapse. It resulted in the discontinuation of much of the elite culture so beloved of archaeologists. However, it may have meant improvement in the lives of ordinary people, the vast majority of whom were farmers as the Maya are today.

Still, the fact that the people of Lamanai were using impressive burial vessels is also important. Burying such masterpieces with the dead shows that important people still existed in the Postclassic and that they continued to have access to very fine pottery. Concepts of the afterlife may not have changed all that much either, although it is interesting that Postclassic grave vessels were intentionally smashed (were people ‘sacrificing’ or ‘killing’ the pots?) rather than buried whole as in the Classic.

Politically and economically, Lamanai was probably the capital of Dzuluinicob, the surrounding region or province, in the Late Postclassic. Interestingly, this Mayan word translates to “Foreign people.” Trade goods, such as volcanic glass, copper, and imported pottery from across Mesoamerica suggest that the site was as a gateway or buffer zone between the Caribbean and the Petén due to its location on the New River.

This extraordinary pottery demonstrates high skill – and wealth – centuries after the socalled Maya collapse. The evidence demonstrates what David Pendergast has called “stability through change” – that is, the maintenance of ancient traditions along with the evolution of new ones through times of social upheaval.

And so, our work at Lamanai places the site not within a fallen land of despair and decay, but within an integrated and vibrant Postclassic society that we are now beginning to see for all of Mesoamerica. Lamanai demonstrates that Maya civilisation did not collapse entirely. This is not to deny that some sites – notably those in the old southern Maya heartland – failed to transform and then declined after a crisis in the Classic period. However, Lamanai is an example of how other sites transformed and flourished. But why they survived the chaos of the Terminal Classic, and how, is still unclear.