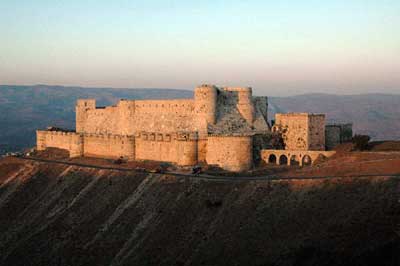 The deadly assault on Jacob’s Ford was launched at dawn, on Thursday 29 August 1179. The leader of the attack was the the Muslim warrior Saladin, b.1137?-d.1193 (known as Salah ad-Din in Arabic), the Sultan of Egypt and history’s great opponent of the Crusaders.

A massive 800 of the fortress’s garrison were killed and at least 700 were taken captive. Saladin’s troops poured through a burning breach in the walls. Meanwhile, the Christian garrison of élite Templar knights made a bloody but ultimately futile last stand.

In a final act of bravery the Templar commander mounted his warhorse and charged into the fray. One of Saladin’s lieutenants later described how “he threw himself into a hole full of fire without fear of the intense heat and, from this brazier, he was immediately thrown into another – that of Hell”. Saladin then set about razing the fortress to the ground, later claiming that he had ripped out the foundation stones with his own hands. The site was then abandoned, untouched, and ultimately forgotten for the next eight centuries.

But with its location now rediscovered, and archaeological excavations underway, it appears that the fall of this seemingly obscure fortress seems to have been a pivotal moment in the history of the crusades.

In 1178, the teenage Baldwin IV began building Jacob’s Ford. He fortified a strip of raised ground on the west bank of the River Jordan, beside an ancient ford north of the Sea of Galilee. With swamps upstream and rapids to the south, this ford was the only crossing of the Jordan for 50 miles and, as such, acted as a gateway between Latin Palestine and Muslim Syria. Baldwin IV hoped the castle would destabilise Saladin’s nascent empire and shift the balance of power in his own favour.

But Jacob’s Ford did not lie on the crusaders’ side of a literal border line, rather, in a frontier zone contested by both Baldwin IV and Saladin – essentially, a no-man’s-land between their respective realms. Moreover, Jacob’s Ford was just one day’s march from Damascus. Consequently in 1178, Baldwin IV was adopting an audacious, possibly visionary, strategy. His new castle was designed to be a defensive tool as well as an offensive weapon, aimed at severely inhibiting Saladin’s ability to invade the Latin kingdom while simultaneously undermining the sultan’s security in Damascus.

If completed, this fortress could thwart Saladin’s ambitions for an empire stretching into northern Syria and Mesopotamia. Baldwin took his new project at Jacob’s Ford exceptionally seriously, and committed practically the entire resources of his realm to its construction.

During that time, Saladin was fighting Muslim rebels in the north of Syria and did not have the manpower to launch an attack, so instead he sought to use bribery in place of brute. First he offered Baldwin IV 60,000 dinars and then 100,000 dinars if he halted building work and left Jacob’s Ford but Baldwin refused and by April the first stage of construction was completed.

The castle now had a formidable ten metre high wall -“an impregnable rampart of stone and iron”, as one Arab contemporary later described – and a single tower, but it was still a work in progress. And by late August 1179, Saladin was ready to launch a full-scale attack on Jacob’s Ford.

On Saturday 24 August he began an assaultbased siege, his intention was to break into the castle as rapidly as possible. There was no time for a protracted encirclement siege, because Baldwin IV was by now stationed nearby at Tiberias, on the shores of the Sea of Galilee, just a half day’s march to the south west. As soon as news of the attack reached him the king began assembling a relief army, so the siege was effectively a race – could the Muslims crack the stronghold’s defences before the Latin forces arrived?

Piecing together the 12th-century written records, and enriched by the archaeological evidence now being uncovered by Ronnie Ellenblum and his team from The Hebrew University of Jerusalem, we gain a vivid picture of what seems to have happened over the next five, grim days. Saladin began by bombarding the fortress with arrows from east and west – hundreds of arrowheads have been discovered on these fronts. At the same time, specialist miners, probably from Syrian Aleppo, were sent to tunnel under the north-eastern corner of the walls, working night and day to collapse the ramparts through the technique of sapping. Meanwhile, Baldwin IV was preparing to march from Tiberias. In the half-light of dawn on Thursday 29 August the king set out with his army to save Jacob’s Ford.

Unbeknown to him, at that same moment fires were being lit within Saladin’s expanded siege mine. Its wooden pit props burned and the passageway caved in, bringing down the walls above. With such a colossal breach the Latin garrison was all but beaten and the bloody sack followed.

Human skeletal remains unearthed within the fortress bear witness to the ferocity of the assault. One of the skulls showed evidence of three separate sword cuts, the last of which split the head and crushed the brain. Another warrior’s arm was chopped off above the elbow before he was dispatched. With much of the castle in flames, Saladin slaughtered over half of the garrison, amassing a mountain of plunder, including 1,000 coats of armour. By noon, racing northwards, Baldwin IV got his first despairing glimpse of smoke on the horizon – evidence of the destruction at Jacob’s Ford.

He was just six hours too late. In the two weeks that followed, Saladin dismantled the castle of Jacob’s Ford, stone by stone. Most of the dead, along with their horses and mules, were thrown into the stronghold’s capacious cistern. This was a rather ill-advised policy, because soon after a “plague” broke out, ravaging the Muslim army and claiming the life of ten of Saladin’s commanders. By mid-October, with his primary objective achieved, Saladin decided to abandon the seemingly cursed site, and Jacob’s Ford became a forgotten ruin. With the loss of Jacob’s Ford, Baldwin’s plan to stem the rising tide of Islamic Jihad foundered.

King Baldwin’s fortunes waned, increasingly debilitated by leprosy, his reign was now stained by bitter defeat, and Baldwin’s grasp on the throne faltered. He died in 1185, aged just 23, his hopes of defending the Holy Land in tatters. In contrast, with the kingdom of Jerusalem destabilised and his hold over Damascus secured, Saladin flourished, uniting the Muslim world between the Nile and the Euphrates and encircling and isolating the Crusader kingdom. In 1187, he met one of Baldwin’s successors in pitched battle, crushed the Latin army and went on to recapture Jerusalem for the Muslims. The Holy City was to remain in Muslim hands until the 20th century.