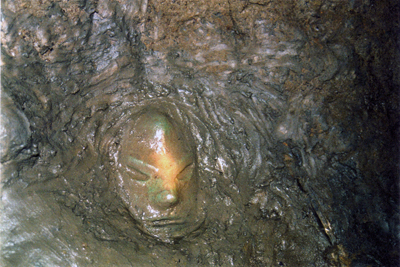 About ten years ago a collector of ancient Indonesian art contacted my husband and me to ask our opinion on a group of masks cast in an odd green metal in his possession. Some of these masks, he said, had been recovered from an underground temple in a remote site called Gua Made, north of the Brantas River in East Java.
I was immediately sceptical, and became steadily more so when the collector announced that ‘the masks are more than 3,000 years old’.

This date was based on thermoluminescence (TL) analysis of a terracotta brick from the ‘underground temple’. Assuming a temporal association between the masks and temple, the collector went on to propose that both could be the product of a lost civilization. Sounding like the plot of a pulp archaeological thriller, it contained the ingredients of a classic mystery: amazing ancient masks made from a mysterious metal, found in an exotic underground ‘temple’ that was sacred to a forgotten culture. All that was missing was publicity.

Not anymore. A recent article by A M Steiner and M Vidale in the pages of the renowned Italian magazine ARCHEO, supports dating the green masks to the early 1st millennium BC. They subscribe to the notion of a lost civilization, observing that the discovery of the masks and their date rewrites the archaeology of Island Southeast Asia, ‘opening a new, unexpected page of the fascinating book of the Eurasian lost past’.

To many authorities on the archaeology of Southeast Asia, this date seems far too early. It was a thousand years later that a great ‘classical’ civilization arose, based on Buddhist ideals. Could these new discoveries really antedate this civilization? Or was there another explanation? These questions came to concern me personally when Italian diplomatic authorities in Indonesia took an interest in the Gua Made masks. This led to the Italian Institute for Africa and the Orient (IsIAO) appointing me to direct an excavation campaign at the site. In July 2007, therefore, in full agreement with all the relevant Indonesian authorities, I began my first field season at Gua Made.

The discovery of the site is controversial, and various witnesses have provided differing statements about the circumstances. The facts, so far as they can be established, are these: following initial looting, two short excavations were conducted by the Bureau for the Archaeological Conservation of East Java (BACEJ). Funded by the collector who acquired the masks, these ran for six days in 2001, and two weeks in 2006. In the process, four vertical shafts were emptied. Covered by brick vaults, these shafts were connected by corridors cut through the bedrock at a depth of about 7m below ground level. Finds included imported glazed pottery, Chinese copper or bronze coins and, of course, the striking green masks.