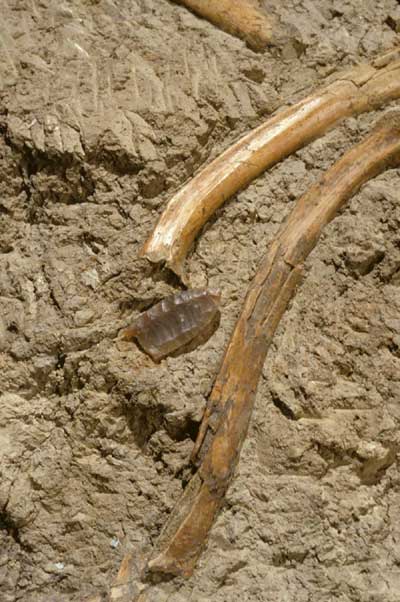 In the evening of August 27th, 1908, a late summer rain began to fall over Johnson Mesa in Colfax County, New Mexico. As the storm grew violent and the river rose rapidly, a frantic message was sent to warn residents of the small village of Folsom, a dozen miles downstream, of the advancing tide of water. By the time the floodwaters reached the town they were half a mile wide and at least five feet deep. Rolling walls of water swept through the town, destroying property, carrying away livestock, and killing seventeen men, women, and children.

This tragic event was not only pivotal in the history of the village, but also in the history of American archaeology, for when the storm waters had subsided, they revealed bones eroding out near the base of an arroyo (gulley).

The bones were found by George McJunkin, a former slave, who worked as the foreman at the Crowfoot Ranch, tending cattle and breaking horses. Realising these were not cow bones, McJunkin recounted his discovery to his friends, including Carl Schwachheim, a blacksmith who shared his curiosity for natural history.

Schwachheim was intrigued by what he heard. Yet it was not until 1922 that he visited the site. He recorded the event in his diary – which was fortuitously tracked down by Meltzer after a long search for Schwachheim’s living relatives. Of the event Schwachheim wrote:

DECEMBER 10, 1922
Went to Folsom and out to the Crowfoot Ranch looking for a fossil skeleton. Found the bones in an arroyo 1/2 mile north of ranch & dugout nearly a sack full which looks like buffalo & Elk. We only got a few near the surface. They are about 10 ft down in the ground.

Life evidently moved at its own pace in New Mexico in those days. More than three years were to pass before Schwachheim took the bones to the Colorado Museum of Natural History in Denver, where Harold Cook, the Museum’s palaeontologist, identified them as coming from a previously unknown and apparently extinct species of bison which he believed to be of Pleistocene age. Jesse Figgins, Director of the Museum, needed fossils suitable for display, so excavations began in May 1926 with the aim of retrieving a mountable bison skeleton. They succeeded and this skeleton was on display in the Museum until the 1990s. Schwachheim was the principal and often sole excavator at the site, and after a couple of months he found the first stone projectile point:

JULY 14, 1926
Found part of a broken spear or large arrow head near the base of the fifth spine taken out. It is about 2 inches long & is of a dark amber colored agate & of a very fine workmanship. It is broken off nearly square & we may find the rest of it. I sure hope we do. It is a question which skeleton it was in, but from the position of them it must have been in the skeleton of the smaller one & just inside the cavity of the body near the back. It was found 81/2 feet beneath the surface with an oak tree growing directly over it 6 inches in diameter, showing it to have been there a great length of time.

The discovery was reported to Figgins in Denver, who urged the crew to be more careful and to try to find a point in place. The following summer, Schwachheim did indeed find another stone projectile point, this time squarely between the ribs of one of the bison. His diary, which includes sketches, reads:

AUGUST 29, 1927
I found an arrow point this morning it is of clear colored agate or jasper. It is not exposed the full length but it is hollow on the sides and looks something like this. The point was near a rib in the matrix. One barb is broken off. Since noon Mr Blair found another not in place but in the loose dirt; it is much the same shape 1 inch wide at break and 3/4 at base. … These are not of the notched points but are the link between the spear or lance and the notched point of a later day. Sent a letter to the boss today.

On receipt of the letter, Figgins immediately sent telegrams to all the major museums in the country, inviting the leading archaeologists and palaeontologists of the day to come and see for themselves.

Responding to the call were Barnum Brown, vertebrate palaeontologist at the American Museum of Natural History; Frank Roberts, archaeologist at the Smithsonian Institution; and A.V. Kidder of the Carnegie Institution of Washington: all agreed the point and the extinct bison bones were contemporary, testimony that humans had been present in America by at least the latest Pleistocene. Kidder put the age at 12,000 years ago. As Meltzer later showed, that was too old by 1500 years, but was an excellent estimate in those pre-radiocarbon days.

Folsom was the latest in a very long line of sites to be offered as evidence of a Pleistocene human presence in the Americas. The possibility that the arrival of people in America might be geologically ancient was only seriously considered after 1859-60 when the discovery of stone tools associated with the bones of extinct animals in England and northern France established a deep human antiquity. (It should be remembered that right up until around this time, most westerners accepted that the world was created in 4004 BC – a date codified by the 17th century scholar the Archbishop James Ussher.)

The shock wave of Europe’s deep antiquity quickly reached America, and by the 1870s, stone artefacts seemingly akin to European Palaeolithic tools were reported from gravels of apparently Pleistocene age at Trenton, New Jersey. Over the next decade, many ‘American Palaeolithic’ artefacts were reported from surface and buried contexts at other sites, their presence taken as proof of prehistoric people living there tens of thousands of years ago. The artefacts so readily resembled European Palaeolithic tools of undeniable antiquity they were assumed to be just as old.

By 1889, the evidence for an American Palaeolithic was almost universally accepted, yet scarcely a year later it came under fire, when it was suggested that the stone tools appeared crude because they were in fact unfinished, not ancient. As the dispute rumbled on it became clear that it could only be resolved by looking at geology, but geology was providing little guidance. There were questions about particular artefacts – whether they had actually come from a primary context, and about the age of the deposit in which they had been found. In these days before radiocarbon dating, ascertaining the antiquity of a site required firmly associating human artefacts or remains with reliable geological markers of the Pleistocene, such as an extinct fauna. Scepticism did not just exist for its own sake, but emerged when there were repeated cases which failed to withstand scrutiny.

Yet for all its ambiguity and bitterness, and after defying resolution for more than half a century, the controversy over human antiquity in North America simply vanished at Folsom in the autumn of 1927. This was clearly a late Pleistocene age site. The antiquity of its artefacts was undeniable, and their context was unimpeachable. The stone points found lodged in the skeletons of extinct bison could only have become embedded when the animal was still alive; there was no chance this could be a fortuitous association.

Previously, people had argued that there simply had not been enough time depth to American prehistory for native peoples to have independently developed agriculture and civilization, and hence they would have had to have received the impetus from the Old World. Folsom silenced those arguments. Folsom also taught archaeologists how to find more sites like it: look for bones of extinct animals in gulley channels and ancient lake beds, and then carefully search these deposits for associated stone artefacts. In the following decade, numerous comparably aged sites and indeed some that were older (Clovis) with associated mammoth remains, were found on the Great Plains and in the Southwest.

Meltzer’s reinvestigation of Folsom has enabled him to create a vivid snapshot of an event that took place there 10,500 years ago. One autumn day, a group of hunters was passing through the landscape of grassland interspersed with small gallery forests of spruce, pine, juniper and oak, when they came across a herd of about thirty bison. The hunters set about organising a hunt. The bison were herded up the valley and into a tributary flanked by walls three to four metres high, where they became trapped, and there they were killed with stone-tipped spears. The hunters stayed for a few days while they butchered the bison, and assembled transportable packages of carcass: ribs, vertebrae and upper limbs. Then, before winter set in, they collected up their gear and the bundles of meat, and left.

It does not appear that they ever returned to the place. The discarded bits of bison carcass, the lower limbs, mandibles and skulls, lay on the surface long enough for the soft tissue to decay and for weathering and root-etching of the bone surfaces to begin. Within a few years all traces of the kill were covered in silt; within a few centuries it was protected by a layer of shingle shale; within a few millennia it was buried beneath thick pond and fluvial sediments.

As Meltzer concludes: “There the bonebed remained, essentially intact, until a townbreaking flood over 10,000 years later brought an astute cowboy out to check his cattle and fence lines, and to spot something unusual in the bottom of the arroyo, near where he broke wild horses. The irony, of course, is that, however fleeting, ordinary, and even inconsequential this episode may have been in the lives of the Folsom hunters who killed those bison some 10,500 years ago, their actions would have a profound impact on the development of American archaeology.”