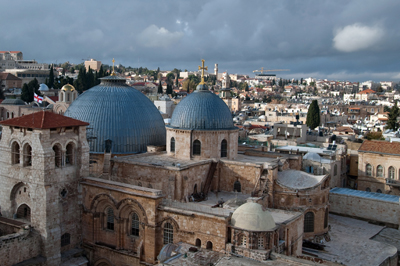 In the morning of 15 July 1099, the starving knights of the First Crusade broke through Jerusalem’s defences and stormed the Holy City. Their victory was bloody, and its legacy profound: the foundation of a new Crusader Kingdom of Jerusalem that endured for almost two centuries. While the capital shifted between Jerusalem, Tyre and Acre as the fortunes of the crusaders ebbed and flowed, this period saw the erection or reconstruction of hundreds of churches, producing an unprecedented flowering of ecclesiastical architecture.

Studying these places of worship is not straightforward. Many of the great crusader churches have been rebuilt or restored out of all recognition. The Pope appointed the Franciscan friars as guardians of the holy places in the 1300s, and over the past centuries they have been zealous in performing their duties. In recent times they have frequently sought to prove the identification of suspected church sites by undertaking excavations, at first somewhat crudely but with ever increasing finesse. After concluding their investigations, however, new churches were erected over the remains, ready to receive the steady stream of modern pilgrims. Many other holy sites and churches remained in the hands of local Orthodox, Jacobite and Armenian Christian communities that still occupy them today, while some have been converted into mosques or simply demolished.

Seek and you shall find

The 19th and 20th century pursuit of former church sites echoes the original Late Roman quest to pin down the many sites named in the Bible. In Jerusalem itself, a score of holy places was originally located by the Empress Helena, mother of the Emperor Constantine and patron saint of archaeologists. She travelled to the Holy Land around AD 313 and doggedly pursued the numerous sites associated with Jesus’ life and ministry, discovering – according to tradition – the True Cross along the way.

One of the first and certainly one of the most important of the sites that was identified by local Christians around this time was Golgotha, the famous ‘green hill’ where Jesus was crucified, and the nearby rock-cut tomb in which he was buried and resurrected. An existing Temple of Venus on the site was torn down, revealing the True Cross lodged in a cistern. The Church of the Holy Sepulchre (or Resurrection, as it is known to eastern Christians) was founded around the tomb, making it one of the most sacred places in Christendom, and the ultimate goal of all pilgrims and crusaders to the east. A great church was begun by Constantine I and completed in the course of the 4th century. The original religious complex consisted of two separate buildings: a five-aisled basilica facing the site of Golgotha and, separated from it by a peristyled court, a massive rotunda built around a marble aedicule (shrine) enclosing the tomb in which Christ was laid to rest after being taken down from the cross.