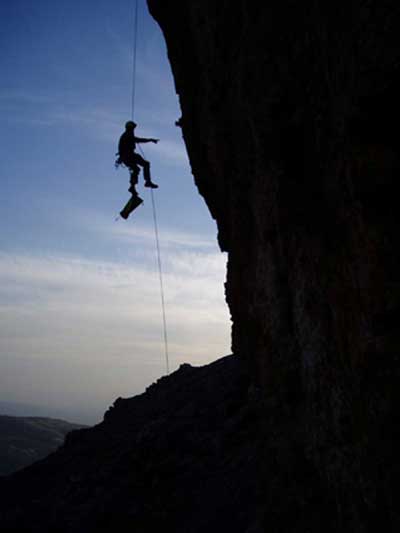 The highlands of northern Jordan are cave country. In nearby Israel, such caves produce a rich archaeology – especially of late prehistoric Copper Age burials. Are there similar cave burials in Jordan? Unfortunately, exploring caves is not included in the standard archaeological syllabus. Here, Nicholas Seeley reports on how archaeologists linked up with caving professionals to reveal the hidden past.

Burials are generally a good source of information about ancient societies. In the Levant, burials were often made in caves as well as in open air cemeteries. Many Copper Age – or Chalcolithic – cave burials have been discovered in Israel and Palestine. Are similar burials to be found in Jordan? In 2006, Dr Jaimie Lovell – the Amman Research Officer at the Council for British Research in the Levant in Jordan – founded the Ritual Landscapes Project. Her aim was to locate natural caves that might have been the sites of Chalcolithic burials.

This Chalcolithic period (c.4500 to 3800/3600 BC) is a fascinating turning point in the prehistory of the Near East. It bridges the gap between the Neolithic, when wandering bands first developed settlements, and the Bronze Age cities of the 3rd millennium. Major changes in social organization, metallurgy, farming and trade were all underway in the region during this period. The Chalcolithic period in the Near East began earlier, lasted longer and yielded more significant finds than the corresponding Copper Age in Europe.

Consequently it has left a treasure trove of evidence for archaeologists.

To date, most Chalcolithic burials have been discovered in Israel and Palestine, where construction and development are constantly uncovering new caves and previously unknown sites. Moreover, 50 years of cave exploration has turned up hundreds of spectacular late prehistoric artefacts.

In Jordan, to the East, the geology is the same but the situation is very different. The Hashemite Kingdom of Jordan is a small country, with a population of just over six million, much of which is concentrated in the capital, Amman. While the country’s urban centres are undergoing rapid development, both physical and social, the outlying areas remain rural, undeveloped and increasingly poor.

Many of the caves found in Israel and Palestine are part of a limestone belt called the Bina formation, which continues under Jordan’s rugged uplands where it is known as the Wadi es Sir limestone. But without the constant building of roads and settlements that characterizes its western neighbour, many prehistoric sites in Jordan have simply remained buried. Additionally, the lack of a tradition of outdoor recreation and ‘adventure caving,’ means that Jordan’s caves are largely unexplored.

While Chalcolithic settlement in Jordan is well studied, few burials have been found. Are many more late prehistoric sites concealed under Jordan’s hills, just waiting to be discovered? Jaimie Lovell and her Ritual Landscapes Project team set out to find the answer.

The first challenge the project faced was actually finding the caves in a relatively uncharted landscape. Geology provided the first clues: Jordan’s Natural Resources Authority was able to provide maps of the major fault lines in the Wadi es Sir formation, and the project’s archaeologists chose to concentrate their search in those areas. They also focused on the formation’s two major valley systems, Wadi Kufrinja and Wadi Rayyan, which were likely to have been routes used by prehistoric people who moved primarily on foot (wadi is the Arabic word for valley). In addition, the group searched the nearby uplands where Jordan’s one well-known cave system, Zoubia, is located.

But the lion’s share of the cave-finding was done in a pickup truck, driving from town square to town square in the early mornings, asking the old men who congregate on pavements or in front of mosques for stories of caves up in the hills.

Such local people have greatly helped the project : some have guided the project to little known caves and rock shelters that have held some of the most interesting discoveries.

Others have sent the team on wild goose chases – sometimes literally. As Lovell remembers: ‘I was occasionally advised to explore goat sheds and garbage dumps. Once, I was sent to a cave with a whole load of chickens and geese. As I came out the bemused owner said, ‘do you want some eggs?” Indeed, modern re-use has destroyed the archaeological record in some caves. Others have been filled with debris from building or plugged with concrete to keep children and animals from wandering into them. The worst problem may be treasure-hunting, since local folklore abounds with stories of buried gold left by Romans or fleeing Ottoman viceroys.

Additionally, the complexity of the highland landscape means that an archaeologist could be standing two feet uphill from a cave mouth and not see it. To guide the surveying group on a cliff or hill it was often necessary to install a lookout on an opposite hill. Armed with binoculars, a walkie-talkie and a trusty thermos of tea, the lookout would spot the cave and alert the unsuspecting archaeologist.

However, finding the caves was easy compared with navigating their interiors. When Lovell designed the project she had never been in a cave – aside from the occasional sanitized tourist cave. To learn the ropes, she took research leave in the UK for caving lessons.

Only then did she realise how much skill would be needed for her project. So, in a canny move, she recruited her professional caving instructor, Adam Evans, onto the team. Evans brought his colleague Michael (‘Frag’) Last.

The two men are passionate about caving and climbing and are co-founders of Outdoor Instruction (www.outdoorinstruction.co.uk) an adventure sports company based in the Peak District National Park in Derbyshire. Finally, Henry Rockliff, a young ‘exploratory caver’ from the Sheffield area, joined the group, bringing the total to three skilled cavers. Their job was to help find the sites, go in first, and then figure out how to help the archaeologists get into the caves, get their work done and get out – alive.

Unlike caves in the UK and Europe, which are often heavily travelled, Jordanian caves are unmapped and filled with unknown hazards. In known caves, cavers choose the route to match the skills of the group. In unexplored caves, cavers often have no choice except to climb, crawl or abseil through whatever they find in front of them. Cavers need to know not only how to explore safely, but how to improvise and innovate while doing so.

It was entirely thanks to the expert cavers that the archaeological team could enter many of the most archaeologically fruitful caves. Unsurprisingly, the most interesting finds often came from the most inaccessible places, where dangerous terrain provides artefacts some protection from treasure hunters, vandals and casual explorers. For example, one cave near Rasun containing large collections of Neolithic and Iron Age artefacts could only be entered by abseiling down a 15m vertical shaft.

Similarly, the most interesting find of the expedition, a pair of copper or bronze axe heads, was hidden on the far side of a 5m long ‘squeeze’, or crack, barely more than 30cm high and 70 or 80cm wide, in a muddy hole the team came to dub ‘Copper Cave.’ To get past the squeeze, the explorers had to crawl head first, pushing their packs and equipment ahead of them.

To date, the Ritual Landscapes Project has located 126 sites, including 39 cave systems that were linked to finds of archaeological material. Thirteen sites containing late prehistoric material were surveyed in greater detail, as well as a few that contained material from other periods but appeared to warrant further investigation. The axe heads found in ‘Copper Cave’ were, by far, the team’s most significant find. Their discovery came unexpectedly, at the end of a frustrating week in November 2006 during which nearly nothing at all had been found.

They were found half-buried in the thick muck of the cave and surrounded by green copper oxides that were clearly visible to the archaeologists as they came out of the narrow ‘squeeze.’ With the assistance of the local antiquities department, the artefacts were removed and taken to a conservator. Though heavily corroded, they bore clear similarities to those discovered in the Palestinian Territories in the famous Nahal Qanah cave, alongside sculpted coffins and gold ingots. Like the Nahal Qanah axes, the Jordanian ones appear to have had a ceremonial or display function rather than being functional tools or weapons.

The cave in which they were found is narrow, damp, difficult to enter and appears to have no chambers or side passages, making it seem unlikely it was ever used as a habitation. Thus Lovell suspects that the artefacts were likely to be associated with either a burial or a cache of supplies or wealth. The survey also recorded pottery, small bones (as yet unidentified) and polished pebbles that could imply burial in the cave.

Finds at the other sites have included pottery, bone shards, grinding stones and small segments of what were probably box-shaped stone coffins – the latter, unfortunately, too common to be easily attributable to any period. Of the datable objects, many appear to be from the Chalcolithic and Early Bronze Ages; other concentrations date to the Middle Bronze Age, Iron Age, Islamic periods, and the modern era. Roman finds were more prevalent in rock-cut or modified caves.

Though the team has found much of interest during their Jordanian survey, the archaeologists are sure much more remains to be found – not least because many far grander and more elaborate artefacts have been discovered in Chalcolithic burial caves in Israel. The Ritual Landscapes Project has demonstrated that Jordanian caves were being used in the same way as those in Israel.

If Jordan’s caves are properly excavated, major discoveries are possible, even likely. There have been other benefits to this project too, as a number of groups in Jordan have learned about the project and taken an interest in preserving and protecting their country’s underground landscape.

Lovell and her colleagues’ pioneering work has shown that cave archaeology can be done in Jordan, and that more secrets may lie waiting to be found in the Jordanian cave systems.