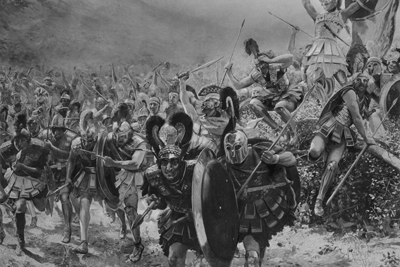 Most people today probably think Marathon has something to do with the Ancient Greek Olympics. In fact, there was no marathon race at the Olympics. Nor is there any reliable ancient account for a run from Marathon to Athens (a distance of 26 miles) to bring news of the victory of 490 BC. What the ancient historian Herodotus actually records is a run by Pheidippides from Athens to Sparta to summon aid before the battle – a journey of roughly 150 miles.

The Marathon run is one of many myths and uncertainties that shroud the truth about the battle. When exactly did it happen? How big was the Persian host? Did the armies fight parallel to the sea or across the width of the plain? How long did the fighting last?

The problems are compounded by the longevity of the myth-making tradition. Just as the Battle of Britain has become encrusted with legend and cliché in the past two generations, so the story of Marathon was told and re-told as part of a nation-building myth in 5th century BC Athens. Many of our ‘contemporary’ sources are nothing of the sort. They may have as little to do with historical reality as a modern politician invoking ‘the spirit of the Blitz’.

If ancient historians struggle with paltry, spiced-up, and mutually contradictory sources, archaeologists can only be depressed by the state of the battlefield today. It is virtually impossible to take a ‘landscape approach’ to understanding what might have happened. The ancient landscape has been transformed by deforestation, silting, and urbanisation.

Consequently, a visit to the battlefield is uninspiring. You drive first through Athens’ outer suburbs and edge-of-town industrial sprawl. Then you cross the hills separating the wide plain around Athens from the narrow coastal strip that lines the Bay of Marathon. As you descend towards the sea, you again enter a congested concrete town, one which spills out across the former battlefield immediately to the north.

The burial mound of the 192 Athenian dead sits in a scruffy, low-lying park hemmed in by nearby suburbs. There are no views, no panoramas of the battlefield, no battlefield walks that traverse the lines. The urban clutter combined with the drying out of the plain and its gradual expansion seawards preclude any overview of what might have happened where.

Yet this battle matters. The Athenian victory 2,500 years ago was the founding event of western civilization. Had it been lost, had Free Greece been absorbed into the Persian Empire, the implications for human history would have been massive and immeasurable. Imagine no Aeschylus, no Parthenon, no Plato, no Alexander. Imagine later no Byzantium, no Eastern Christianity, no Crusades.