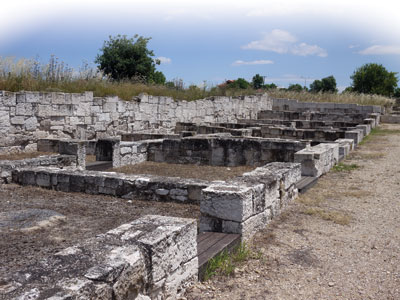 The great Athenian orator Demosthenes, who spoke the purest Greek and who is therefore much studied, spent half his life and many of his best speeches railing against Macedonia, the big brother to the north who was constantly threatening to sort out the unruly Athenians. Yet, whereas Athens was supposedly a democracy, Macedonia was unashamedly a kingdom – and under Philip II and his son Alexander, a very successful one. But how did a kingdom operate, and how did it differ from Classical Greece?

An obvious difference lay in its geographical structure. Classical Greece was based around cities, the polis: the city and its surrounding territory. Macedonia, on the other hand, was a much larger kingdom, comprising a number of different cities – two of which vied to be the capital. The old capital was Aegae, modern Vergina, where the kings were all buried. We have already looked at the burial of Philip II, the grandest burial of all (CWA 50). Then in CWA 51 we went on to look at the rest of Aegae: the huge palace built by Philip II, and some of the other tombs that made up the city.

There was, however, another ‘capital’: Pella was the commercial capital, the place where Philip II and Alexander the Great were born. Today, modern Macedonia is dominated by the great Medieval town of Thessalonika, the second town in Greece and, in the Middle Ages, second only to Constantinople as the queen of the Aegean.

Vergina lies 50 miles to the west, along the old Roman Via Egnatia and the modern motorway. Pella forms the third point of the triangle above Vergina to the west and modern Thessalonika to the east. Today it is 20 miles from the sea, but in Classical times it was a maritime town on a huge inlet of the sea, now long since filled in; today, it is the bread basket of Greece.

Mosaic magic
Archaeologically, the features for which Pella is best known are the pebble mosaics. The art of mosaic was perfected by the Romans, who learnt to make mosaics of tesserae – small stones cut to shape; but mosaics had already been used by the Greeks, though rather than tesserae, they used pebbles. Most of the resulting mosaics came out in black and white, but occasionally they used coloured pebbles too.

The finest examples of these are found at Pella, where a number of rich houses have been excavated in the blocks south of the agora. The finest of these represents the abduction of Helen, where Theseus has seized Helen and is about to carry her off in a four-horse chariot, and is signed by the mosaicist responsible for the composition, Gnosis.

Another large house, known as the House of Dionysus, consists of two parts formed around two central peristyle courtyards. In the southern part of the house are two andrones (banquet rooms) with the famous mosaic of a lion hunt, now in the museum.

In the centre of Pella was the agora, or market place. This is currently being excavated and restored courtesy of the EU, indeed some would say that it is being over-restored. But excavations are revealing a row of buildings with a workshop at the rear, and a shop to sell the goods at the front.

On the far side of the agora was an administrative complex, housing the city magistrates and certain cultic functions. The south-west section housed the public archives. Here, in a two-storey building with a central courtyard, public documents were transcribed, sealed, and stored. Archaeologists found scores of clay seals from the public documents which had fallen from the archives above on the second floor. They also found broken pens and ink wells, along with stores of clay and stone stamp seals. A popular image used on these seals was that of a grazing cow – which also appears on coins. The inscription ‘Pella exchange’ on another seal is indicative of the commercial activities carried out in the complex.

However, the agora at Pella is, to some extent, misleading. Whereas in a Classical Greek city the agora was not only the commercial centre but also the political centre, being surrounded by the law courts and the offices of the town council, Pella was part of a kingdom, and so the real centre of the town lay in the palace on the higher ground north of the agora.

The palace has five separate units, each with a large central courtyard surrounded by buildings erected on terraces stepped into the hillside. These units, each of which has four to five buildings, communicate with each other via gates, flights of steps, and galleries. On the south side, facing the agora, was a monumental colonnade. Unlike at Vergina, here at Pella the palace was the administrative centre as well as a grandiose royal residence. The royal household lived here along with various administrative, military, and financial services with their suites of handsome banqueting rooms and baths. There were also archives and libraries, the royal mint, and rooms for cultic purposes. For keeping fit there was a palaestra, or wrestling ground, and the portico of a gymnasium.

The original core of the palace was built towards the end of the 5th century; but most of the architectural remains discovered date to the Hellenistic period.

Collecting the best
A splendid new museum has just been opened at the site which contains many of the treasures and, unlike at the Vergina museum, one is allowed to take photos of the exhibits.

Many of the finest pebble mosaics have been conserved and laid out. However, for me the finest exhibit was many an archaeologist’s delight: a potter’s shop, which had been overwhelmed in a catastrophe, was discovered still filled with complete pots. All the pots were excavated and put on display for our inspection. Alas, they were no longer for sale as they would have been 2,300 years ago.

I was also fascinated by a case devoted to finds from the sanctuary of the god Darron. Darron was a local, rather minor god – of healing – but, nonetheless, still surviving right down to the 1st century BC, despite the onslaught of the Olympian deities from Greece. Interestingly, the artefacts from his shrine differed little from those found at the shrines of the Olympian gods.

Macedonian rulers wanted the best for their kingdom and were prepared to pay top prices to get it. The great Greek painter Apelles was lured away to do his best work at Pella, none of which, alas, has survived. The playwright Euripides spent his last days in Pella writing one of his most surreal plays, The Bacchae, where fierce women, tricked by the vengeful Dionysus, tear the king Pentheus limb from limb.