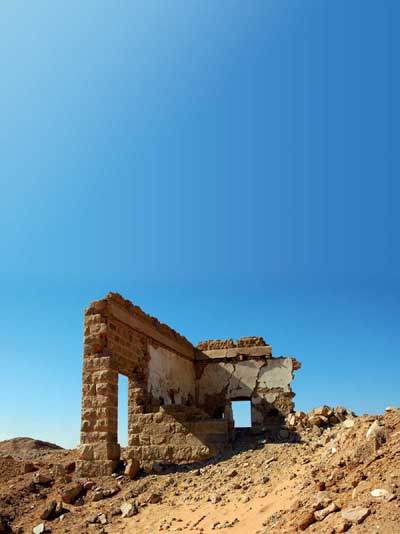 The CWA-backed dig, the Great Arab Revolt Project, is now in its second season. In November 2007, we returned to Jordan to excavate more sites associated with Lawrence of Arabia’s war against the Turks. Lisa Corti and Anna Gow were among the volunteers on the 25-person field team. This is their account.

Silence. The wind picks up a handful of sand and throws it against the walls of the ruined Late Ottoman railway station at Aqabat-Hijaz, in whose shade 25 archaeologists stand and reflect. It is 11 o’clock on 11 November 2007: Remembrance Day, and the last day of the second season of the Great Arab Revolt Project (GARP) in Southern Jordan. Eighty-nine years are blown away with the dust across the desert. For this is one of the places where Arab fought Turk in Lawrence of Arabia’s war, a place now being investigated by the new archaeology of modern conflict.

Continuing investigations begun last season, work focused on the vast, beautiful landscape of Wadi Rutm, and on the flat-topped hill on which the Ottoman Army camped, looking down on the Hijaz Railway as it snaked its way through the sand dunes on its passage to Medina. The top of the hill is studded with circles and squares laid out in stone blocks – the weights around the edges of former military tents. Our task was total excavation to create a full record of the entire camp.

The ‘tents’ were cleaned and planned by excavation teams. More tent pegs, both wooden and metal, were found. Altogether 17 standard tent-rings, 6 tent-squares, and one large tentring were documented. Many of the tent-rings had postholes in the middle, indicating bell tents, whereas the squares did not, implying ridge tents.

During our time on the plateau we managed to answer two key questions left hanging last year: where did the Ottoman soldiers cook, and where was their latrine. The ‘cook-house’ – a small rectangular pit lined with two courses of large stones – contained considerable amounts of charcoal and animal bone (thought to be sheep). The latrine, located at the north end of the hilltop well away from any of the tent-rings, had been dug inside an existing stone-circle, the base of its steeply tapering profile bearing telltale dark stains.

One stone circle proved more elusive. It was obvious from the start that this feature was different, with its sturdily constructed two courses of large ashlar cut stones that were clearly not from the immediate vicinity. Why would Ottoman soldiers have transported these to the top of the plateau, when all the other tents had been weighted down with smaller stones found, if not on the plateau, then nearby? After excavating about half a metre of wind-blown sand, we discovered a concrete-like surface apparently made from a lime-based material visible in local outcrops. Lying on this surface was a rectangular rock placed exactly in the centre of the circle. The feature, moreover, was located on the edge of the plateau, looking over the traditional caravan route through the wadi. Everything pointed to this being a megalithic structure of prehistoric date. Was it then re-used by the Ottoman soldiers camped here? We found no evidence, but it is hard to believe that such a well-built structure would not have been.

During excavation we revealed a robber pit dug near the centre of the megalithic circle no doubt by local Bedouin, convinced that the Ottomans buried their gold in the desert before their final retreat. Having cleaned and photographed the stone circle, we returned two days later to draw the structure, only to find that the pit had been extended. It appears that the legends are as strong as ever – we had been watched, and our work had been interpreted as that of well-informed and highly-equipped treasure-hunters! GARP archaeologists, just by their presence, had stirred up the modern fallout from the very conflict they were investigating.

While the excavators worked on the Ottoman camp, others explored the wider landscape of the wadi. High up on the north-eastern escarpment, the GARP surveyor plotted a fort built of drystone breastworks, an associated military camp, a series of outworks formed of trenches with parapets, and a mule-track leading up to the complex from the wadi. To the northwest, further up the wadi, the GARP metal-detectorists were scanning other tent-ring sites.

The first, of only a b o u t half a dozen rings, yielded nothing and remains a mystery. The second, much larger, located next to the former Batn Al-Ghoul station, the next up the line from Wadi Rutm, provided the richest finds of the season from just an initial sweep. As well as the usual Ottoman uniform buttons and rusted ration-tins, the detectorists found a well-preserved wooden tent-peg still with rope wrapped around it, and, the find of the season, a large portion of the front of an Ottoman army tunic, complete with a roll of tobacco papers still in the front pocket!

Above this large encampment, high on the Batn Al-Ghoul escarpment, the team found a fortified complex with commanding views down the length of the wadi. An inner building complex with loop-holed walls was protected by intermediate walls and an outer perimeter wall. The fort’s size and strength, and its location directly above the railway line as it winds down into the wadi, mean that this is likely to have been the Ottoman command-and-control centre for the entire area. The local Bedouin tradition is that the commanders and their cavalry were stationed in the fort. An initial detector sweep yielded buttons, coins, cartridges, and a horseshoe. The fort is another in a growing number of sites in and around Wadi Rutm which represent an intensively militarised landscape and a hardfought war.

The final task of the project in the 2007 season was a rescue mission to record the remains of Aqabat-Hijaz station. We have no way of knowing how much of the station will remain even next season. The entire site – the station buildings and the surrounding breastworks and blockhouses – are under sustained attack by bulldozers, almost certainly driven by treasurehunters. So we spent a day clearing and planning the standing remains to create a basic record of what once stood here – true rescue archaeology in action.

Here, too, we held our minute’s silence, ‘so that,’ as King George V decreed, ‘in perfect stillness, the thoughts of everyone may be concentrated on reverent remembrance of the glorious dead’. For us, it felt particularly poignant, a chance to reflect on the purpose of our work, and on the lives we were trying to uncover, a few of which may have been lost on the very ground on which we stood. For – as the discovery of cartridges, shrapnel, and a cache of grenades lined up along a breastwork ready to throw indicated – Aqabat-Hijaz station had once been a battlefield.