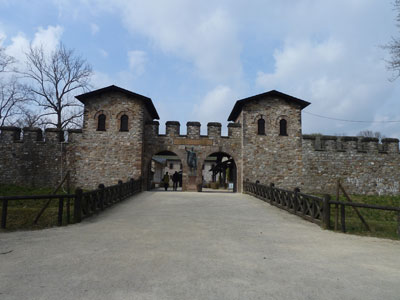 Our ideas about what a Roman fort should look like are being overturned, or at least being severely challenged, by recent reconstructions at the Roman fort of the Saalburg in Germany, as Andrew Selkirk reveals.

The Roman frontier in Germany is not as well-known as Hadrian’s Wall because it was not built so stoutly, and has therefore not survived as well. Nevertheless there is in Germany a Roman fortification known by the Latin name as Limes (‘limit’). It was built at much the same time as Hadrian’s Wall, but was very much longer – covering nearly 560km (350 miles) in its heyday – and was given up in around AD 270, following the German invasions, when the frontier was drawn back to the Rivers Rhine and Danube.

The Limes cut off a triangle of land between the Rhine and the Danube, including the modern town of Frankfurt, which for nearly 200 years was part of the Roman Empire. Since it ran through two different provinces, the governors of each province had differing ideas about how to replace the original timber palisade when it rotted. Whereas in the western part (Upper Germany) it was rebuilt as a bank and ditch, in the eastern section (Raetia) it took the form of a rather unimpressive stone wall.

Since the western part was built mostly of earth and timber, the course was largely lost. In the second half of the 19th century, it was rediscovered, at first by various amateur groups but then the great German historian Theodore Mommsen began to take an interest.

He persuaded the German government to set up a Reiches-Limes-Kommission to study the Limes. However, in the 1890s the German Emperor Kaiser Wilhelm was in the habit of spending the winter in his favourite spa town of Bad Homburg, just north of Frankfurt, where the study of the Limes was in full swing.

In particular, one of the auxillary forts – the Saalburg – was being excavated by a local archaeological society, and he was impressed. This, he thought, would be a fine symbol to link his German empire with the Roman Empire. Would it not be an idea to rebuild the Roman fort at the Saalburg that the excavations were rapidly uncovering? If you are an emperor, a project like this is easy. You simply whistle up your army and tell it to rebuild the fort as instructed by the archaeologists.

The army came in and got to work: the ditches were dug out, and all the walls and gates of the fort were reconstructed. At the main south gate, he erected a splendid statue of the emperor Antoninus Pius, with an inscription in Latin saying that the fort was rebuilt by the Emperor Wilhelm in memory of his father. The statue that we see is of Antoninus Pius, but what we are meant to understand is that this was really a Roman ancestor of Kaiser Wilhelm.

Having completed the walls round the outside, a start was made on rebuilding some of the interior buildings. The obvious place to start was on the principia, the headquarters building that stands in the centre of the fort and faces the visitor coming in through the main gate. This was a courtyard building. On the south side, facing the entrance, was the great basilica or assembly hall/drill hall, and which demonstrates just how surprisingly large these buildings were. This led through to the central courtyard, divided by a cross passage in the middle, and on the far side a row of offices with the aedes at the centre – the shrine where the military standards were kept.

To the right of the entrance, two granaries were rebuilt and have been laid out as the site museum with a magnificent display of some of the numerous articles that were found in the course of the excavations. Behind them, a single barrack block has been reconstructed that is now used as the taberna, or eating house, a restaurant for visitors to the site, where both Roman and modern foods are offered.

Reassessment
Recently, however, a further major building has been reconstructed: the Saalburg has become a major centre for research on Roman Limes and offices were needed for the researchers. So, why not reconstruct the praetorium, the commanding officer’s house, but reconstruct it so that it can serve as modern offices as well? In the interior, certain compromises have been made. It was a courtyard building and the cloisters that ran round the courtyard are a little too draughty for modern tastes. Therefore they have been enclosed with a glass structure.

The big controversy, however, has blown up concerning the outside of the building, which has been rebuilt entirely differently from the rest of the fort. When the Saalburg was originally reconstructed, the Kaiser wanted it to be built of stone, and for the stone to be left undressed, rather than be plastered over – giving the fort a somewhat bleak appearance.

Since the Saalburg inevitably became the model for forts throughout the empire, most subsequent reconstructions have been carried out using bare stone and leaving the same finish. But is this really how Roman forts were built in Antiquity?

Evidence has been accumulated that outside walls were normally plastered, and painted with lines to imitate proper cut-stone (ashlar) construction. It was decided, therefore, to reconstruct the praetorium in this way. It gives the visitor quite a shock on entering the fort to see the headquarters building ahead and the granary to the right, both in bare stone, and then to see the commanding officer’s house in a gleaming ash colour on the left.