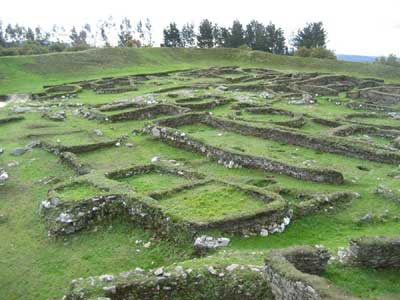 The region of Galicia occupies a wet and wind-blasted corner of Atlantic Spain. Life there has traditionally been tough. Now however, the region is leading the way in Spain in conserving and presenting its archaeological sites. David Miles, Chief Archaeological Advisor of English Heritage reports.

Only 150 years ago travellers described Galicia as backwards and faminewrecked. For many, departure by sea was the obvious, desperate solution to escape the poverty. About two million left in the 19th and 20th centuries – so much so that Argentina’s Buenos Aires is often said to be Galicia’s largest city, while the Cristobal Colon cemetery in Havana its largest burial ground. The Galician nationalist Alfonso Daniel Castelao said ‘the Galician does not protest, he emigrates’.

But while many leave Galacia, others visit – if only briefly. The area boasts Europe’s first great tourist route. It was a stroke of genius when someone, in the 9th century, decided to claim this far-flung, poverty-stricken corner of Spain for the tomb of the apostle St James. Thus by the 12th century GALICIA: Archaeology’s reign in Spain pilgrims were trudging and sailing from all corners of Europe into what was Christendom’s most important shrine after Rome and Jerusalem. Dante even defined a pilgrim as someone who went to the House of Galicia. St James was killed in Judea on the orders of King Herod Agrippa in AD 44. According to legend his body was transported across the Mediterranean on a boat navigated by an angel, through the Strait of Gibraltar and up to the sea loch or ria marked by the great rock of Padron. The body was buried in a wood and then forgotten for about eight centuries. Conveniently the saint came to light as Christendom began its fight back, the Reconquista, against the Moors who had occupied much of Spain. Mounted on a white charger, Santiago ‘Matamoros’ ‘the Moorslayer’ was said to have led the Spaniards to victory at the Battle of Clavijo in 859. And, fortunately, he put in a decisive appearance on many other occasions. When Spanish troops entered Iraq in 2004 – much to the disapproval of most Spaniards – their uniform bore the red cross of the Moorslayer. Spain’s diplomatic skills left something to be desired.

However, the role of Santiago has tied Galicia effectively to greater Spain so that in spite of their strong sense of local identity, language and culture – which includes a celtic link as we shall discuss later – Gallegos also see themselves as a fundamental part of Spain and Spanish history.

I went to Galicia to see how the regional government, the Xunta, was leading the way in Spain in conserving and presenting their archaeological sites. It is important to appreciate that Spain has one of the most devolved systems of government in the world. Under the harsh 36 year rule of General Franco, himself a Galician, Spain was the most isolated and inward looking state in western Europe. When he died on 20 November 1975 Spain had to consider how to navigate the dangerous waters from dictatorship to democracy without the helping hand of St James’s angel.

After decades of brutal control from Madrid the Spanish regions were desperate for, and demanded, a greater degree of local control.

The pragmatic solution was what the Spanish termed the estrado de las autonomias, regional autonomies but with variations adapted to local circumstances. So regional administrations have varying powers: the Basque country, Catalonia and to a lesser extent Galicia for example, run their own police forces and television channels. Since 2002 the Autonomous Communities, the Xuntas, have become responsible for health services and control a large proportion of local taxes. Most museums are run by the regional Xuntas and four of them maintain Archaeological Services.

The debate still rages in Spain about the success or failure of regionalisation. There are clearly some problems, with 17 different governments and legislatures. Most obvious are the variations in standards in many areas, like education and heritage, across the country.

However, even on a brief visit the competitive spirit between Xuntas was easy to observe. And regional heritage is clearly a growth area. This is part of a changing attitude. For the past 30 years the Spanish have radically transformed themselves and their country. They have embraced the cult of the new; what they term ‘huida hacia delante’ – running away forwards.

Anything old is often seen as slightly musky and sordid and unworthy of attention. Not surprisingly the British architect Richard Rogers called Spain ‘Europe’s architectural hothouse’ as works of the high-priests of global architecture, Gehry, Foster, Isozaki and Spain’s own stars – Rafael Moneo, Calatrava and Miralles – built across the country. Spain has probably rebranded itself more successfully than any other country in the late 20th century.

But over the past 30 years much of Spain’s fantastically rich heritage has been neglected. Attitudes are changing though and Galicia is leading the way. The Xunta has established the Galician Archaeological Heritage Network or GAHN. This is based on four themes: megalithic sites, rock art, hillforts and the Roman World.

With a group of Spanish archaeologists led by Felipe Arias Vilas, Director General of the Galician Heritage Service, I went to see some of the progress. Although the networks cover most of Galicia each theme is centred on a major archaeological site or complex. Inevitably there has been an architectural competition for a new museum, educational and research centre at each site. These are integrated into historic landscapes where ecological and archaeological conservation is taking place and trails developed to encourage visitors to explore further.

In our short visit we focussed on the castros or Iron Age hillforts. The 5,000 or more stone defended hilltops are a defining feature of the Galician landscape. One of the largest of these – the San Cibrao de Las in the south has been chosen as the focus of the Hillfort Culture archaeological park. Inside its massive circuit of defences there are stone built complexes of round-houses, rectilinear buildings, workshops and courtyards.

The aim is not to create honey-pots. The Galicians are transforming many of their sites like the prominent castro of Viladonga, restoring buildings, clearing scrub and removing the dreaded eucalyptus. The granite landscape of Galicia is reminiscent of Cornwall or Western Ireland, yet much of it is blanketed by eucalyptus, originally planted for the now declining paper pulp industry.

The castro of Viladonga was still occupied when the Romans founded the city of Lugo (probably named after the Celtic god Lug) following the Augustan conquest of northern Spain. Lugo has one of the finest city wall circuits to survive from the Roman world. The city has seen better days. Its population and economy declined, many of its buildings rotted and were colonized by a shabby red light district.

We walked through the back lots gingerly avoiding the hypodermic syringes which littered the ground, artefacts of Galicia’s notorious drugtrade with South America. Yet Lugo is transforming itself before your eyes, clearing debris, exposing Roman buildings for display, restoring its old buildings for new occupants.

The link with the Celtic god Lug is interesting since the Celtic connection is a strong part of local identity. Indeed, while in Galicia, we heard music – made by bagpipes and drums – that sounded distinctly Irish. Giles Tremlett, author of Ghosts of Spain: travels through a country’s hidden past (Faber 2006) wrote ‘Galicians are probably not real Celts. But they would like to be.’ But what is a real Celt? Plenty of people in Ireland and Western Britain would label themselves Celtic – though no Briton, so far as we can tell, applied the term to themselves two thousand years ago. Celtic languages are not spoken in northern Spain today, though there are still lots of Celtic place-names, the identity ‘Celtic’ appears in tombstones of the Roman period and the genetic links are certainly close along the Atlantic seaboard. The Irish text The Book of the Invasions tells how Ireland was invaded by the ‘sons of Mil’, the so-called Milesians, from northern Spain. Perhaps some grain of prehistoric truth lies behind the legend.

Whatever the case, Spain’s archaeological heritage is phenomenally rich and largely unappreciated. For years Spain was culturally and politically isolated; then it suffered from amnesia.

Now it is developing its heritage at a spectacular rate, partly to emphasise its regional identities, partly to maintain and broaden Spain’s place as one of the world’s most popular tourist destinations. Galicia’s Archaeological Parks are each receiving about 8 million euros of investment.

It will be fascinating to see if with this bold and innovative approach Galicia can make a success of its past.