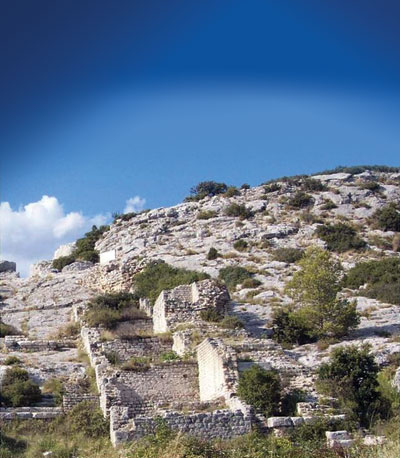 When they were built in the 2nd century AD, the great watermills at Barbegal, in the South of France, were at the very cutting edge of technology. Their revolutionary design, says Wayne Lorenz, enabled the Roman Empire to flourish, and endured unchanged until the 20th century.

It is hard to imagine what the local people thought when they saw the great watermills at Barbegal crank into action for the first time. Certainly it must have been an impressive sight: 16 huge waterwheels stretching downhill in pairs, the water being scooped up by each set and dropped down onto the pair in front, cascading from one pair to the next down until it finally reached the bottom of the slope where it drained away. Attached to each of the mighty wheels was the grinding mechanism that milled the grain into flour. This huge complex, built in the 2nd century AD just outside Arelate (modern-day Arles) in the South of France, marked a turning point in food production, enabling bread to be made on an industrial scale. Significantly, it represented a revolutionary advancement in design from small, animal-driven mills to powerful water-powered machines, a leap in engineering that held its own for nearly 2,000 years.

The milling of grain has been practised for millennia: traces of starch grains on Upper Palaeolithic hand tools suggest the practice of hand-grinding cereals dates to at least 23,000 years ago, and, indeed, some evidence suggests wild grass seeds were being ground into flour as early as 45,000 years ago. As society evolved, so more-efficient methods for grinding cereals were developed to increase the productivity necessary to feed a growing population.

Horse to water
The Romans relied primarily on animal-driven mills, such as those that can be seen today attached to the bakeries uncovered at Pompeii and Ostia. They were powered by brute force and gravity. Donkeys and horses provided the power, turning the millstones at low rotational speeds. Stones with a steep grinding
plane allowed gravity to carry the grain from the inside of the stone, where it was fed in, to the stone’s outside edge, where the flour emerged. These hourglass-shaped stones were common throughout the Roman Empire and ranged in diameter from 45cm to 64cm (18in to 25in).

Although this method was slow, it was efficient, and remained in use for a considerable time. The introduction of water power to replace animal power, however, ramped up the level of production.

The use of water power for milling by the Romans was recorded by Vitruvius in the 1st century BC, and a number of archaeological sites demonstrate the Roman use of water to power millstones. Just as with the Roman arch in bridge and building structures, Roman engineers did not actually invent the water-driven mill; but – again, just as they did with the arch – they exploited this hydropower technology much more widely than their predecessors, designing the new mills to take advantage of water that was already being transported via great aqueducts to their urban centres like Arelate.

Key to this new process was the use of a waterwheel and gearing to turn the millstone, the heart of the milling process. The millstone gradually evolved from the steep-sided animal-powered versions to become greater in diameter and squatter in shape, and, therefore, with a much-reduced grinding plane. Crucially, the millstones were driven by gears that greatly increased the rotational speed. Thus, the resulting centrifugal force, rather than gravity, was sufficient for the grain to pass from the inside of the millstone to the outside edge of the stone, which meant that much flatter stones could be used.

Barbegal watermills
Barbegal is a unique site in that it represents a transitional period in design from the early animal-driven mills to the water-powered machines, clearly demonstrated by the shape of the millstones, which are hybrid versions of the hourglass and flat designs.

The mills are located in the Roman province of Gallia Narbonensis, and operated from the 2nd through at least the 4th centuries AD. They were fed by the great aqueduct system built to bring drinking water from the local mountain range, Les Alpilles, to Arelate, but which was then later modified to provide water to both the city and Barbegal. Its site near Via Aurelia, a major highway in southern Gaul, was probably located on an inland marsh or waterway that connected with the Mediterranean Sea. The surrounding area was a prime agricultural region; indeed wheat and other grains are still grown here today – and feature in some of the great works of art by 19th-century Post-Impressionist Vincent van Gogh.

There were numerous installations of waterwheel-driven mills in the Roman Empire, but Barbegal was unique in that it had 16 water-powered millstones. As such, it is probably the largest known milling installation of its kind in the Roman era.

Barbegal millstones
The best-preserved Barbegal millstone is a bed stone that has a diameter of 76cm (2ft 6in) and a depth of 44cm (1ft 5in) at the axle. The diameter of this bed stone falls within the range of most rotary-powered millstones that have been discovered from Roman antiquity, which range from 55cm (1ft 10in) to 85cm (2ft 9in).

Other millstone fragments discovered in the area of the Barbegal site, and also now at the Musée de l’Arles, have specific design differences between them. Notches in the top of the runner stone were filled with lead to anchor metal fittings to an axle that was used to turn the runner stone.

Several of the millstone fragments have diameters that range from 66cm (2ft 2in) to 76cm (2ft 6in). Two other examples have much smaller diameters (48cm/1ft 7in and 54cm/1ft 9in) and have a different design, including the shape of their grinding-plane surfaces.

These millstone differences could have been intended by the Roman engineers to test varying designs in an effort to develop the most efficient millstone for water-powered mills. The technology regarding rotational speed and millstone shape that was engineered and refined at Barbegal may well have had a significant impact on advancing the knowledge of the mass production of flour: more could be produced with greater control of the product. Although there is no written record, knowledge obtained here was passed down from master to apprentice until the Industrial Revolution.

The millstones that have survived are of the basaltic rock type, which were chosen by Roman millers because of the small cavities, or vesicle texture, that provide the cutting and grinding edges needed for processing the grain. There are some questions as to their origin, but we do know that the stones do not come from the same quarry locations. Since the city of Arelate was located nearby, and it was an important port city in Roman times, the Barbegal millstones could have been brought in as ship ballast from various Mediterranean locations.