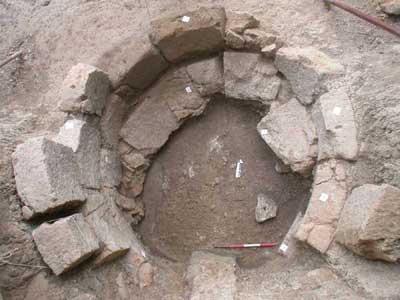 By the autumn of 398 BC the siege by an army from Rome, 16km due south, was taking its toll on Veii, wealthiest and most powerful of the twelve-member Etruscan League. For eight years, the robust walls encircling Veii had withstood the Romans’ attacks, but supplies could arrive only by night, and the city’s weaponry and willpower were flagging.

Normally the leaders of the Etruscan League convened only once a year, in springtime, at a shrine area called Fanum Voltumnae, for athletic games, religious rites, and discussions which concluded with the annual election of a federation leader, the praetor Etruriae. Some outsiders were welcomed to this Etruscan parliament, which normally included a few Roman merchants (they would then refer back to Rome) and delegates from such non-Etruscan territories as Falisca, which lay between seacoast Etruria to the west and the Sabines of the Tiber Valley to the east.

But following eight years of siege the exhausted Veii citizens were begging for the League to intervene in the city’s defence. To decide upon intervention, as historian Livy (Titus Livius) has recorded, League members were summoned to Fanum Voltumnae for an extraordinary council meeting. The question, in that specially convened autumn session, was whether the other Etruscan cities should make war against Rome to defend Veii, or continue to remain on the sidelines. Having taken council from the appropriate deities, the decision was made to abandon Veii to its destiny. Two years later the city fell to Rome.

This is one of five times when Livy mentions Fanum Voltumnae, but what Livy failed to specify was just where Fanum was situated. Over time the precise location of this centre of ancient Etruscan political life was lost, but its importance was such that, beginning some five centuries ago, historians including the Dominican friar Annius of Viterbo (circa 1432-1502) launched a search to find Fanum. A local boaster, Annius claimed Fanum had been situated in his own city of Viterbo, but others hoping to resolve the mystery brought the locale closer to Lake Bolsena, north of Viterbo. Indeed, one theorist put Fanum in the middle of that lake, on Bisentina Islet. There the matter rested, until now.

The word fanum means ‘shrine’, and it is known that this most central of Etruscan shrines stood in a sacred grove. The shrine was dedicated to the supreme god of the Etruscans, Veltha (also spelled Volturna or Voltumnas and, under the Romans, Vertumnus, described by Varro as the Deus Etruriae princeps). Veltha was the youthful god of the seasons, of abundance and hence of fecundity, and through the association of Vertumnus with the Etruscan god Tinnia, Veltha has also been compared with Jove.

Why would the location of a shrine with unique political significance have been lost? ‘Fanum was presumably so famous that Livy felt no need to mention its location simply because everyone knew where it was,’ suggests Professor Simonetta Stopponi of the University of Macerata, an Etruscologist.

Although definitive proof is lacking, Stopponi believes that a solution to the mystery is at hand. In the year 2000, a team of archaeologists under her direction, with the stamp of approval of Italian cultural heritage authorities and funding from the Monte dei Paschi di Siena Bank, launched annual summer campaigns excavating a promising, three-hectare site due west of the tuff plateau of Orvieto. The fieldwork team includes graduate students from the University of Arizona as well as from Italian universities, including that of Viterbo, from Spain and from Mexico.

The site was and is at a natural crossroads in a plain at the foot of Orvieto: a major connecting route ran through the Tiber River valley north toward Etruscan Chiusi and Arezzo and south toward Veii, just as major railway and highway routes do today. Eastwest roads lead seaward through hill country (again, as they do today) toward the Etruscan centres of today’s Bolsena and the key seaports of Tarquinia and Cerveteri, ancient Caere, and inland toward Perugia.

Not coincidentally, says Stopponi, the area under excavation is to this day called Campo della Fiera – Fairgrounds Field. ‘First under the pre-Etruscan Villanovans and then the Etruscans, the area we began excavating was in use, as pottery shards show. For the Etruscans it served as an animal fair,’ Stopponi says, ‘where Roman merchants would participate, then refer back to Rome what they had seen.’ The area continued as a market fairground for animals and produce throughout the middle ages, or until the Black Plague struck in the 1340s. Alongside the site, running approximately parallel to it in a straight line, is a medieval road connecting to the westerly ascent to Orvieto.

Continuous use of the natural junction means a particularly complex number of layers. In the 1990s a Roman road was found, and, most recently on the site, two Etruscan roads. One is a thoroughfare. The other widens as if into a gathering-place; along one side are chunky blocks of tuff which Stopponi’s team describe as pedestals for Etruscan-era statues. Following indications of late l9th century excavations, the University of Macerata team found traces of walls, bronze votive offerings, fragments of well made Attic vases and of terracotta, including an important terracotta architectural element matching one now in the Pergamon Museum in Berlin. Showing the complex layering which characterizes the site is a temple wall that surrounds a triple-layered sacred area. Set squarely atop an Etruscan substructure, datable to the 6th-4th centuries BC, are the foundations of a Roman temple measuring 6m x 12m. And surrounding both of these, in the shape of an elongated box, are the foundations of a 13th century church with rounded apse, identified from cadastal records – the official documents of land holdings – as San Pietro in Vetere (Saint Peter’s over the Old Church). Most impressive was the excavation of a round fountain area, on a slight rise above and overlooking the temples, whose decorations included the head of a lion. According to Stopponi, ‘This would have been the sacred spring.’

In archaeological terms the site is vital to Etruscan studies since it is a rare example of an inhabited site rather than a City of the Dead. Moreover, the sheer size of the inhabited area, its location at the foot of Orvieto and at a natural crossroads by the Tiber River, the shrine area and multiple adjacent buildings, the impressive fountain on its rise overlooking the larger area crossed by several road, the continuous use of the sacred area from the 6th century BC to the 16th century AD all show the enduring importance of the area. Nonetheless, the scholarly debate continues over whether Fanum was indeed located at Orvieto. In September 2006 Francesca Boitani, director of the Etruscan Museum at Villa Giulia, said that the site was ‘already well known’ but that ‘there are no new elements which would lead one to think that Fanum Volumnae is to be identified with that site’. But as Stopponi warns: ‘of course we shall have certainty only when we find inscriptions’. With luck, that will surely only be a matter of time.