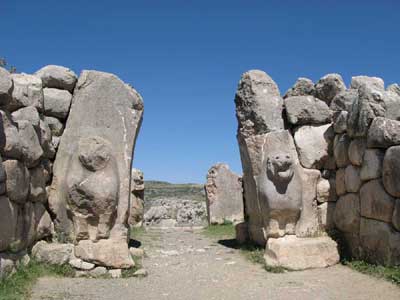 Every summer after the end of term, Roger Matthews, Professor of Near Eastern Archaeology at the Institute of Archaeology of University College London, takes up to a dozen of his undergraduates to Turkey to teach them about the archaeology of Early Anatolia. The course is designed to give the students an understanding of the archaeology of Turkey from the Palaeolithic to the Iron Age, and above all to encourage them to appreciate the highly varied landscapes of Turkey and to see ongoing excavations in action at a range of sites. This summer he focused on Central Turkey where they visited a host of sites currently under excavation. Here Matthews recounts some highlights of their Turkish travels.

Our arrival in Ankara was marked by the striking sight in the night sky of a slender crescent moon alongside a brilliant Venus, appropriately mirroring the design of Turkey’s flag, which flies everywhere across the city. Our first destination was the British Institute at Ankara, where I served as Director some years ago. We were warmly welcomed by the current Director Dr Lutgarde Vandeput and her staff who put all facilities at our disposal.

The following morning we left Ankara for the Neolithic site of Çatalhöyük. This iconic site dates from about 7500 BC and was described by its original excavator, James Mellaart, as the earliest city in the world. Whether city or, perhaps more accurately very large village, it is certainly one of the largest and most sophisticated Neolithic sites yet discovered in the Near East. Of special interest are the painted murals and plastered features that are found on interior walls throughout the settlement.

For the past 15 years the project has been under the direction of Prof. Ian Hodder, aided by the Site Director, Shahina Farid. The two gave our group a detailed tour of the site and its adjacent facilities. The archaeologists are currently excavating a large area of mud-brick houses, adorned with the usual features of painted wall panels and occasional animal heads. They have also been investigating human burials made under the floors of the buildings while the occupants continued to live in the houses. In the Neolithic, the boundaries between life and death seem not to have been so marked as those we have constructed in the modern world. The scale of the operation at Çatalhöyük is massive and its achievements can be followed online (www.catalhoyuk.com). It must be the most intricately excavated, and fully published, Neolithic site of the entire Near East.

To provide our students with further examples of Neolithic settlement in Central Turkey, we visited the aceramic Neolithic mound of Asikli Höyük, approximately 25km southeast of the modern city of Aksaray. At Asikli Höyük we studied the surviving remains of excavated mud-brick houses and marvelled at the deep section through the mound, showing how houses were built one atop the other through centuries of successive occupation, from around 8000 BC and earlier. Sitting in the fields below the site, our group engaged in a thoughtful discussion about the nature of the Neolithic in Turkey, in particular concerning the issue of why people should want to switch from hunting and gathering, to the hard realities of farming and herding. Concerning the subsequent Chalcolithic (or Copper Age) period, c.5000 BC, we were treated to a tour by Ulf-Dietrich Schoop of his newly started excavations at the site of Çamlibel Tarlasi, close to the Hittite capital city of Hattusa. Here Ulf has found stone buildings and pottery revealing contacts with the Aegean and South Anatolia at a time when much of Turkey seems to be quite sparsely inhabited.

Into the Bronze Age

Moving through time, the next major group of sites that we visited belonged to the Bronze Age, 3000-1185 BC. Of these, the Middle Bronze Age site of Kültepe-Kanes is particularly important. Upon the mound at Kültepe-Kanes lies a huge Middle Bronze Age palace. It was destroyed by fire, in a major episode of destruction that visited Anatolia around 1650 BC and is attested in the archaeological record throughout the region. In the fields below the mound are located dozens, if not hundreds, of well-appointed houses belonging to merchants engaged in trade and commercial activity in the region during the early centuries of the 2nd millennium BC. Thousands of cuneiform texts from these houses give vivid evidence of the life and times of these individuals, many of whom were trading specialists originating from the city of Assur, located on the Tigris river in northern Iraq.

At Kültepe-Kanes the people lived in a physically discrete community called the karum, or trading centre. Their concern was to engage in private and state-sponsored trade with local Anatolian communities, exchanging tin and high quality textiles for copper and silver. Sadly our visit did not coincide with the presence of the new excavation director at Kültepe-Kanes, Fikri Kulakoglu, but we were given a most warm welcome and informed site tour by Emre Çankaya, an MA student on the team. A visit to Hattusa (www.hattuscha.de ) was also a must for the group. This was the great capital city of the Hittite empire of the Late Bronze Age (1650-1185 BC). We began with a visit to Yazilikaya, the rock-carved shrine to the northeast of the city adorned with relief scenes of Hittite deities and depictions of the Hittite king Tudhaliya IV (13th century BC). We then tackled the city itself, spread out over many hectares of rocky, undulating land, a real mix of nature and nurture within a single urban environment.

Our tour continued with an introduction from the new Hattusa director, Andreas Schachner, and a close look at the stretch of reconstructed city wall at the northern edge of the city. From here we proceeded to visit all the major features of the site, including the Great Temple, the Lion Gate, the reservoirs, the Sphinx Gate, the Warrior Gate, the citadel and much else besides, all on a scorching hot day. Liquid relief was provided by a visit to the German dig-house in the adjacent village of Bogazköy, where Andreas and team provided us with endless glasses of hot sweet tea, just the thing in the heat.

From there we made the long drive westwards, eventually arriving at the site of Kaman Kale Höyük, excavated for many years by a Japanese team under the direction of Sachihiro Omura. Our tour began with the workshops and amazing facilities currently being built in the nearby village, including a complete Japanese garden with pagodas and waterfalls. The scale of the accommodation and laboratories is astonishing and a great testimony to Omura San’s dedication to his project. We were shown round the excavations at the site itself, learning all about the occupation of the settlement from the Early Bronze Age into the Iron Age. Thus were our students able to see Anatolia’s cultural development into the Iron Age, yet another period of great interest.

The splendours of the Iron Age

One particularly wonderful Iron Age site is Kerkenes Dagi. There, survey and excavations by Geoff and Françoise Summers, alongside Scott Branting, have recovered an astonishingly rich picture of an Iron Age city of the 6th century BC (www.kerkenes.metu.edu.tr ). The scale of Kerkenes Dagi is hard to envisage until you stand on top of the highest point of the city and take in with your windswept eye the full scope and enclosure of the massive stone city walls, which contain an area larger even than that of the Hittite capital at Hattusa.

Inside the city wall at Kerkenes Dagi work by the team has recovered plans of housing blocks, reservoirs, a palace, and a network of streets, alleys, and open spaces, a snapshot of an Iron Age city, perhaps the ancient Pteria mentioned by Herodotus, unrivalled in archaeological scope and detail. We were shown some of the major finds from the excavations, including metalwork and stone slabs carved with Phrygian motifs and laconic inscriptions.

Of further note is the Iron Age site of Gordion, capital of the Phrygian state, where long-term excavations and study by an American team have been taking place. I was keen that our students see Gordion and we were delighted to be met by Ken Sams, Project Director, and taken directly to the site. Remains of massive city walls, large residential structures and craft rooms were all explained to us in Ken’s sonorous and appealing tones. Respite from the heat was provided by a visit to the so-called tomb of Midas, a huge burial tumulus where a spectacular burial of an adult male was excavated in the 1950s. One can walk into the very heart of this great tomb today and see there the still pristine timbers lining the burial chamber. Current thinking, however, is that this is not the tomb of Midas himself but more likely that of his father, Gordias, of about 740 BC. Following a tour of the Gordion Museum we headed back to Ankara via the Hittite rock-relief site of Gavur Kale. Our students had thus seen excavations in action at a broad range of sites. They had also listened to talks by project directors from an equally wide range of academic contexts and national backgrounds, including Turkish, British, American, German, and Japanese, so there was much opportunity for a comparative consideration of the theory and practice of archaeology in Turkey. We left Ankara on an early morning flight to London. Our students looked sleepy but happy, and that is probably a good way for any course to end.