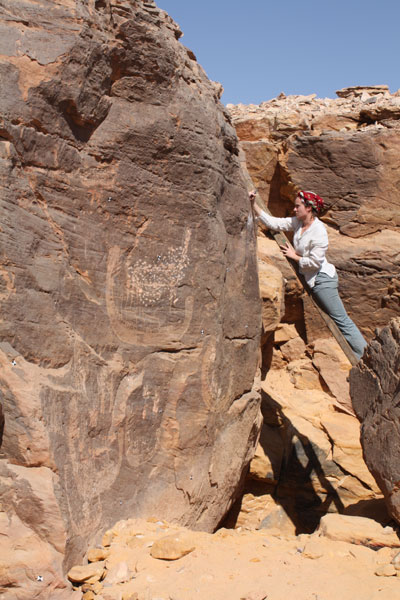 Stylised scenes of boats and animals etched into rocks on the banks of the River Nile include the oldest known depictions of a pharaoh yet discovered. Stan Hendrickx tells CWA how a Victorian drawing and an old photograph led archaeologists to these extraordinary carvings just north of Aswan.

In 1894, a sketch by Bristol-born Assyriologist Archibald H Sayce was published in a catalogue of rock inscriptions copied from sites between Aswan and Kom Ombo. His simple line-drawing records a small procession of four people and a dog, led by two standard-bearers with a fan-bearer bringing up the rear. In the centre is another figure, shown wearing a distinctive conical headdress and carrying a crook-like staff.
To modern eyes, these bear a striking resemblance to the White Crown of Upper Egypt and the heqa sceptre, key elements of a pharaoh’s royal regalia – but in Sayce’s day the study of ancient Egypt’s Early Dynastic history was still in its infancy. Excavations at Hierakonpolis had not yet uncovered the Narmer Palette, and Scorpion and Narmer maceheads, 5,000-year-old artefacts decorated with some of the oldest-known images of ancient Egyptian kings. Without these reference points, Sayce had no reason to suspect that his tableau was exceptionally early. It would be more than a century before its full significance was revealed.
In 2008, Stan Hendrickx, who has a background in archaeology and art history with a particular interest in Egypt’s Pre-Dynastic and Early Dynastic periods, was contacted by Egyptologist Nabil Swelim. Swelim showed him a black-and-white photograph of the same procession, from the unpublished archive of the late Egyptian archaeologist Labib Habachi. Hendrickx was intrigued by parallels with the Narmer and Scorpion portraits, where kings have similar retinues of fan- and standard-bearers. Closer analysis suggested that this artwork may be even older, however.
In the scenes from Hierakonpolis, Narmer and Scorpion tower over their companions, their disproportionate size reflecting their supreme status. This is a classic trope of ancient Egyptian art, reflected in royal scenes throughout the period. In the photographed procession, however, the king is not significantly larger than his retinue, suggesting that the image could pre-date the formalisation of this motif. The position of his crown also hints at this being an earlier version of such scenes: this pharaoh wears his crown pointing straight up, while Scorpion and Narmer have theirs tilted back in the sloping style that would become the standard in later portraits.
The potential significance of this image was clear, but frustratingly Habachi had not recorded where the photograph had been taken. The hunt was on. Hendrickx consulted other experts in the field: it was John Darnell, from Yale University’s Department of Near Eastern Languages and Civilisations, who made the connection with Sayce’s sketch. Sayce describes ‘graffiti… on rocks behind Gharb Aswan, 4 miles [6.5km] north of Aswan, on the west bank of the Nile’. Tantalisingly, his text also mentions additional details: boats (one of which Sayce had drawn, out of context) and animals, as well as a hieroglyphic inscription. Clearly there was more to the scene than Sayce had recorded, but with no mention of it to be found in later academic literature or archaeological reports, it was feared that the artwork had been destroyed during the extensive quarrying known to have taken place north of Aswan in recent times. Darnell’s colleague from Yale, Maria Gatto, led an expedition to investigate, and in 2009 she located the site, close to the modern village of Nag el-Hamdulab.