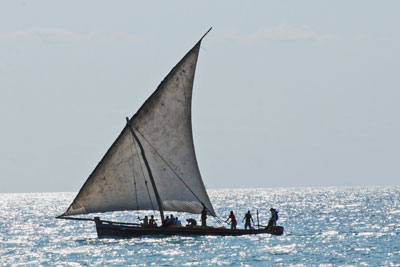 Venturing across the Blue Horizon

In the second part of a feature drawing on his book Beyond the Blue Horizon, Brian Fagan braves the monsoon waters of the Indian Ocean and describes the seafarers who plied them.

Imagine a broad ocean where the winds blow in opposite directions for six months at a time. Such an ocean is a mariner’s dream. It was no coincidence that the Indian Ocean, known to the Greeks as the Erythraean Sea, became one of the great commercial highways of the ancient world. In these usually benign waters, the monsoon winds blow from the north-east from November to March, and somewhat less predictably from the south-west between May and September. The reversing monsoon winds could guarantee a return journey: a sailing vessel leaving the East African coast on the wings of the south-west monsoon could more-or-less be certain that it would return within a year, simply by being intelligent about the winds.

The north-east monsoon wind is the major player, a sailor’s delight, which blows virtually continually, never at gale force, almost never dropping to a flat calm. For thousands of years, it wafted sailing ships from the Red Sea and Persian Gulf to India and East Africa, and from the incense shore of South Arabia as far as the Maldive Islands. Back in the 1930s, the Australian sailing writer Alan Villiers coasted eastward along the Arabian coast in a lateen-sailed dhow, making progress against a north-easterly on the nose. The ship sailed as close as 45∫ to the wind (a modern racing yacht can achieve 30∫), navigating not far from the beach, the skipper spinning the ship around by turning it in front of the wind to head offshore when the breakers were too close, a few ship’s lengths away. When the dhow sailed down the African coast with the monsoon astern, ‘the only sounds were the soft sighing of the monsoon wind and the swish of the sea as the dhow passed gently, shadowing the rippling, deep-blue sea as she ran’.

One can imagine similar voyages along the desolate shores of what are now Iran and Pakistan – laden sailing ships coasting close inshore, trimming their sails to the twists and turns of the north-east wind, maximising soft land breezes, conning their way from one headland to the next without charts or compasses, just the stars overhead familiar to every mariner and desert traveller.

Storms came with the more powerful south-westerly monsoon of summer, which sometimes delivered gale-force winds and heavy rainstorms. This was not a good sailing breeze by north-east monsoon standards, but a well-equipped ship could make a fast passage from East Africa to Arabia or India within a relatively short time. However, most coasting dhows stayed ashore, for their high rigs were potentially lethal in the face of hard-blowing squalls.

Exotic trade
The famous expedition of Egyptian Queen Hatshepsut (1498-1483 BC) to Punt provides a glimpse of a long-established coastal trade. Her temple friezes show ships being loaded with sacks of precious myrrh resin and myrrh trees, their root balls protected by baskets. By Hatshepsut’s time, the Indus Valley, cradle of the Harappan civilisation with its great cities, was a hive of long-distance commerce, much of it carried over water, apparently in vessels constructed from teak planks. We have no idea what these vessels looked like, but some of them may have had sewn hulls.

The catalyst for this trade lay not in India but in Mesopotamia, among rulers who presided over cities on a sandy delta without rocks or minerals, or even enough timber for beams and boatbuilding. Apart from prosaic commodities like timber and cloth, Sumerian kings craved gold and copper, exotic semi-precious stones and pearls, ornaments, ivory, and carnelian, even unusual animals like monkeys. Thus it was that Mesopotamian seafaring began, linking (albeit indirectly) the Indus Valley and western India with Oman and Bahrain. We know of the trade from cuneiform tablets from Ur and other cities between the Tigris and Euphrates, also from a scatter of Harappan artefacts found in Mesopotamia and in Gulf sites.

For millennia, this trade flourished in the hands of small traders coasting from anchorage to anchorage and port to port. Their vessels were like mobile bazaars, laden with foodstuffs and rolls of cloth, with cheap baubles and such utilitarian items as axes and sickles. They followed the same routes year after year, staying ashore when the south-westerlies blew strongly, coasting east and west, close inshore, when the gentle north-easterlies returned. Cabotage under sail continued into the last century, the rhythm basically unchanged from the earliest times, whatever the advances in technology or raw materials.

Long before the advent of Islam, Arabs handled much Indian Ocean cabotage, sailing, as far as we know, in boats fashioned from sewn planks, a technology borrowed from Indian boatbuilders of centuries earlier. Coastal voyages along what are now the Yemeni and Saudi Arabian coasts carried spices such as myrrh. As the Greek writer Agatharchides memorably remarked: ‘A heavenly and indescribable fragrance seems to strike and stir the senses of everyone. Even far out from the land it happens that the fragrant odours blowing from the myrrh bushes and others of the kind reach the neighbouring parts of the sea.’